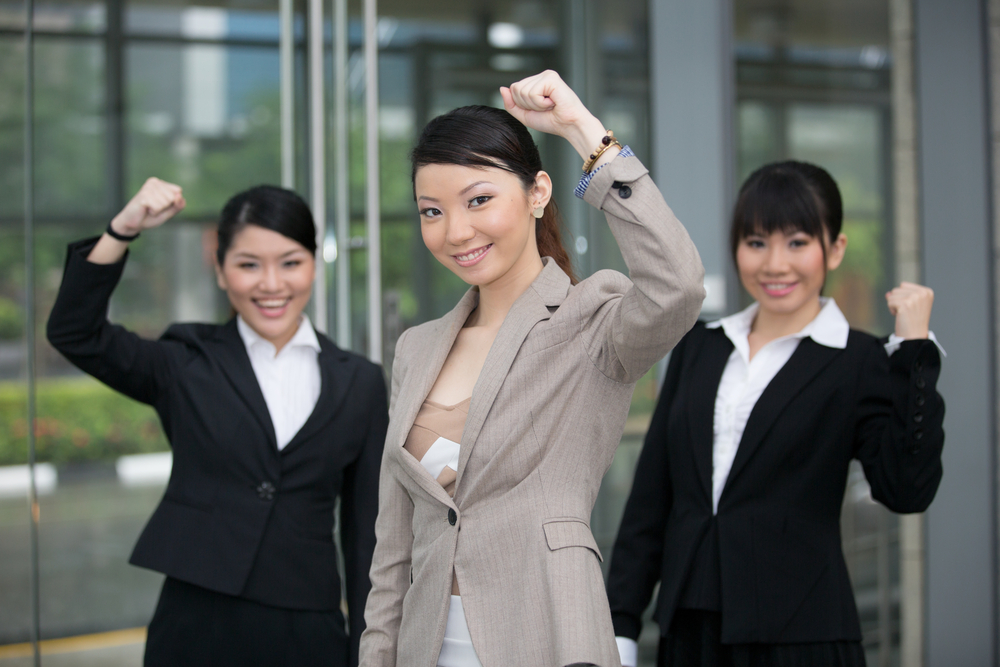 5 Tips for Breaking the Glass Ceiling Without Getting Cut

Let’s talk Businesswoman with a capital B, a la Bossladies and Big Bitches. Get used to being called the latter. I totally understand this dream, for the Businesswoman is awe-inspiring. The sight of one always left me wondering “What kind of sorcery do you practice?” and more importantly, “May I join your coven?”

The realm of Businesswoman is not for the weak of heart. Trust me – right before resigning from my first management gig, I was referred to a cardiologist after fainting into some very hard concrete. Though I gained entry into the Businesswoman domain, I lasted less than a year due to issues such as 1) wanting a life outside of work and 2) hating my boss.

During this brief Businesswoman stint, I gained insight on what it takes to #ladyboss and I’m passing along these tips to you. And I’m not even charging! But maybe I should, hmm.

Below are some very important considerations to undertake before committing yourself to the Businesswoman path:

#1 Get Real with YoSelf

Can you fully commit yourself to Businesswomanhood? Take a long look at your obligations and prepare to commit 20 hours of the day to your career. A “normal” person might designate 8 hours a day to work. The Businesswoman sleeps infrequently, answers emails at 4 AM, and dreams of Excel spreadsheets.

Now is the time to inform friends and family that you’re “phasing out” quality time together.

Not seeing you is really for their benefit. Six months into the Businesswoman regiment, they won’t recognize this jittery, slightly furious woman before them who talks non-stop about spreadsheet nightmares. You won’t recognize this person either, but THIS JITTERY FURY OF A WOMAN WITH SPREADSHEET NIGHTMARES IS YOU!

Are you hungry for that next promotion? While on the Businesswoman path, you’ll face being perceived as a power-hungry bitch when demanding a fair salary. Making matters more difficult is that you’ll probably earn 25-30% less than any man within eating distance. Oh, you will also be called a man-eater if you ever correct a male colleague. Perhaps eating your competition is a better resolution for the gender pay gap.

We’ve confirmed that you’re mentally hungry, but are you also, like, physically hungry? This is to be expected since long commutes and back-to-back meetings don’t allow for actual meals. Breve breakfasts and latte lunches may satisfy some, but a liquid diet leaves this hypoglycemic lady dangerously close to committing cannibalism (review tip #2 for additional encouragement for eating men). I managed to stay relatively nourished by purchasing boxes of Costco protein bars. I highly suggest keeping a box in both your car and work desk. Protein bars deserve more credit, for they’re inexpensive (cough cough – pay gap) and saved several coworkers from enduring a hunger-induced lecture that starts with “Per my last email…”

#4 Get Fit and Stay Furious

Physical fitness is only one aspect of the Businesswoman Obstacle Course. Yes, Running Errands That Aren’t Part of Your Job Description will happen. Yes, Carrying the Weight of Your Male Coworkers will happen as well.

But in order to hit the finish line and land that promotion, you need the mental cool of a sociopathic CEO (forgive me for this redundancy). If you’re pissed off at a coworker, remember to hold a smile, perhaps for hours, and calmly say things like “No worries” and “I don’t mind. I’m only a woman.” Eventually, your facial muscles will adhere to your ulterior motives; smile through all the bullshit, gain their trust, and when you finally land that promotion, test those toned facial muscles for the smile-athon needed to withstand board meetings.

If your Businesswoman resolve is starting to fade, a career-saving exercise I used to practice was a game called Remember That Asshole. This game consists of reliving each time Todd half-assed his part of our team project. Or that time Derrick called me sweetie and suggestively lifted his coffee cup my way.

#5 Throw in the Towel and I Don’t Mean Laundry

Quitting is always a viable option, in my humble opinion. Quitting has bad rap in our society and I used to buy into the SUCCEED ALWAYS AND NEVER GIVE UP mantra. What changed? I believe it was the fifth trip to the ER that cinched it, after realizing I’d spent more time in the ER than on my personal hobbies. Of course, my only hobbies were tracking my career path and investigating promotional opportunities. The most important tip here is to be REALLY honest with yourself: is this the life you want? Some women are capable of succeeding in high-stress careers. Some women can gracefully combat bullshit without pissing off anyone, a skill that I will probably never master. If you find yourself miserable, if the Businesswoman path is negatively impacting your health and overall wellbeing, then quit!

I now consider myself a Contemporary Businesswoman, a version of lady-meets-business that society will need to prepare itself for. Why dedicate my life to a system that doesn’t provide fair pay, harassment-free work environments, or maternity leave? I mean, come on! My hypothetical child is going to be vital economic resource when current politicians are elderly and begging for adequate funding for their end of life care. Opting out of this circle-jerk of a labor force is the best Businesswoman move I’ve made in the past decade.

My fellow womenfolk are ditching their sexist employers in exchange for creating their own businesses. So, perhaps women no longer need to break society’s legendary glass ceiling.

The way I see it, the glass ceiling is already cracking due to a millennia of stagnant business practices that could have been avoided with the introduction of fresh menstrual blood i.e. more women in the workforce.

I don’t know about you, but I’m gonna watch this old ceiling slowly crumble from the comfort of my home office.