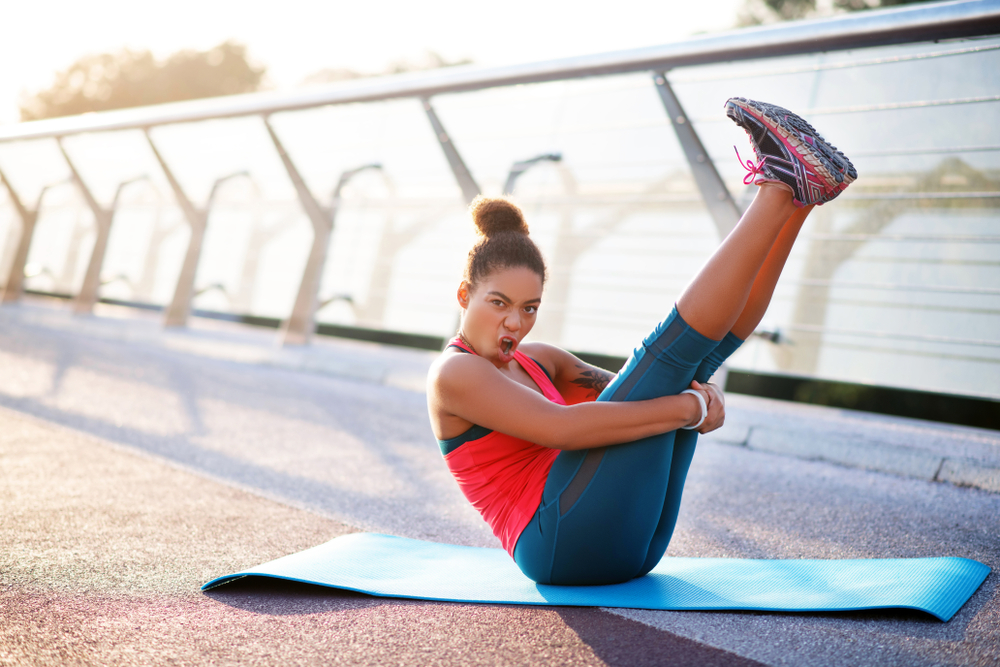 Exercise and I don’t exactly get along, and by exactly, I mean not at all. However, now in my 30s, I can no longer escape my doctor’s persistent recommendation that I pick up an activity, ANY kind of activity before my muscles atrophy into nothingness. I couldn’t escape Doc’s recommendation because, well, the prospect of getting off the exam table seemed too much work, so I reclined and hoped their lecturing about early-onset heart disease would lull me into sweet, self-neglecting sleep.

So, you can imagine how elated I was to register for an exercise class where 30% consisted of laying on the floor – yoga!

After eight months of regular practice, I achieved something more important than weight loss (I lost no weight) or improved self-image (actually my high self-image might be the core issue here) – I was mistaken for a f#%&ing yogi! Students would walk in and ask if I was today’s instructor. WOW! What flattery! Sure, it might be due to my taking Yogi Bob’s front-and-center spot, but I prefer to think it was due to my newfound inner peace.

How did this neurotic excuse for an adult (me) join the ranks of yogi-hood? Everyone has their own path to day-drunk stumble through, but I’ll provide a rough outline of mine:

The first month of yoga was the most strained. Learning the pose names in their original Sanskrit caused some communication issues on my part. “No, you’re an asana!” and “I will NOT kundalini myself! Not here in public!” were not my best moments. The more Americanized names in-relation-to animals were not much better, considering the first time I heard “Camel Pose,” I thought the instructor was crotch-shaming me. But if you stick with it, you’ll learn!

Two months in and the positive vibes were really getting to me. And not in a good way. I was surrounded by all these heartfelt people, and some of the things that came out of their mouths made my sarcastic soul quiver in revulsion. For example, one instructor ended sessions by saying in her most whisper-woo way, “I bow to all you beautiful souls.” Of course, I joined in on the bow…in order to steady my gag reflex. Weeks went by and I meditated with my eyes closed, which shielded my eyerolls. (I believe “hidden eye role” should be an official yoga move.)

But my body grew tired of convulsing from my newly developed triggers: hearing the phrases “healing energy exchange” and “calmness through breathwork.” Then one day, I had an I AM ONE moment. Sitting on my ass, I heard the beginnings of a woo-woo phrase, and then realized I AM THE ASS. What exactly was I trying to prove to myself or anyone else with my “too-cool-for-woo” attitude? I dropped the snark and generated some goddamn gratitude.

I am absolutely not an easygoing person. I notice everything, which is not helpful, considering that most people, places, things annoy me. Basically, nouns are not my strength. However, there’s no point wasting my energy on inconsequential things – best to reserve my energy for castrating toxic-masculinity.

The fourth month of my yoga journey, I developed a skill seemingly sent by the heavens: ignoring. No longer did an instructor’s inflection of the “o” in the word “bones” irritate me. I ignored it, and then I started to enjoy it! Her long-vowel when uttering “bones” became amusing; my imagination transformed her into a spooky little grandma with an affinity for bones. With every mention of “bones” I was filled with bliss from imagining little grandma scattering bones about.

Ignoring alleviated my annoyance, which elevated my appreciation for quirks. This was particularly helpful when a substitute led the class into a Downward Dog so lengthy it threatened to aggravate my involuntary fart muscles. The sub then had the audacity to suggest the class transition into what I would have called a Passive-Aggressive Handstand. Now able to laugh things off, I applauded this Casual Handstand as I transitioned into a pose fit for my ego – Child’s Pose.

Yoga really is for everybody. There are alternative poses to accommodate injuries and physical differences. Now, I wouldn’t say I have a physical limitation, but my juicy backside sometimes makes it damn “rear” impossible to bend myself into certain shapes. During the back-end of my sixth month, I finally gave up trying to be like everybody else – it was during a seated pose, called vajrasana, and I was in so much pain that I was forced out of my literal and figurative comfort zone…

You probably assumed from the above mention of my juicy body that I’m a fat lady, and I can confirm that assumption. The unfortunate part of being fat? After a decade’s worth of embracing myself, there are remnants of shame that hold me back. One remainder of Fat-Shaming Past is not asking for help, especially when it comes to exercise techniques. My yoga instructor didn’t bat an eye at my Thunder Thighs (not even a flirty wink, though?) and eventually we found an alternate vajrasana that worked. I left the studio proud of myself, but also amused, having learned this tricky pose is also known as Thunderbolt.

Around month eight, something I’d always hoped for happened: saying “no” without shame. All my life, this shame ball has rested in my chest – a knotted mess of imposter syndrome and unnecessary apologizing. I’ve already a shaky relationship with nouns, but proper nouns? Disappointing a proper noun spawned so much anxiety I’d shift into Fetal Side Pose. No longer interested in nurturing my conflict aversion, my crowning chakra moment arrived!

Backstory: Ok, so this was not my first dip into yoga. Years ago, when my doc first suggested I partake in some sort of physical activity other than Extreme Scowling, I sustained a painful shoulder injury at a Geriatric Yoga class. The lesson? Never try to out-pose a senior citizen because those bitches are alive n’ stretching for a reason!

Presently, full shoulder extensions are a breach, so I informed my instructor that I required an alternate. I was asked to lie down, bend both legs, then allow my knees to fall to the right…but…something in my soul said NO! I realized that my bent limbs contorted my body into something similar to a swastika. Though this yoga studio would never lead us into Nazi Sympathizer Pose, this instructor was oblivious of the Anti-Semitic potential of this pose. NO! I shan’t lay down and be complicit!

Now a yogi, I took charge of the situation and informed my instructor “I’m going to listen to my body” and was about to transition into a more comfortable pose, a pose that perhaps members of White Feminism are well acquainted with – Reclined Hero Pose. Then again, I didn’t endure this yoga transformation just to revert to an apologizing, fearful woman who avoided conflict and lied to her doctor about “maybe” training for a 5k. I got my ass up off the floor and transitioned into Warrior of All Hate Pose.

An Open Letter to My Chain-Smoking Boomer Neighbor