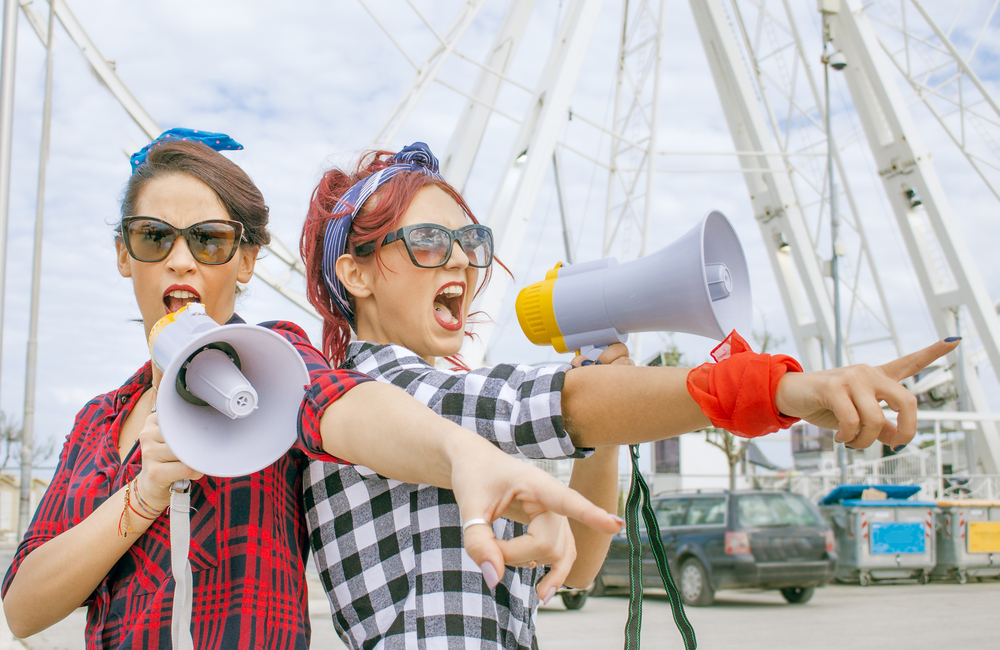 written by Katherine Shaw May 2, 2019
FacebookTwitterPinterestEmail

Are you feeling ignored by men? Are you eager to be noticed? Well, you might not realize this, but becoming politically active is a fast and easy way to gain the attention of men everywhere. Be it online or on the sidewalk, men will notice you! They will approach you and engage in conversation, and you won’t even have to bat those eyelashes!

Sure, there are dozens of dating apps that promise love and connection with men. However, landing a first date requires filling out those pesky “About Me” sections, not to mention all that tiring swiping left and right. I’ve suffered many carpal tunnel flare ups in the pursuit of men, but no longer!

Ditch the apps and bet your dwindling fertility window on finding a mate by commenting on news stories and political memes.

Within seconds, men online will respond to your posts. Men may even send you private messages containing some very explicit offers. In no time, these men will call you endearing little nicknames such as “dumb broad” and will advise ways to improve your life by going “back to the kitchen where you belong.” Some may call these men trolls, but hey, I’ve always had a soft spot for those little guys!

An online presence will only get you so far with men. At some point, you need to hit the town and really show yourself off. However, women need to stay safe and I suggest participating in a group activity. Mojito Mondays at the bars are passé.

These days, what really gets a man’s attention is a group of women picketing on the street.

Invite your single girlfriends for a morning of arts and crafts – picket sign edition. Women need to be direct with men, and what’s better than marching around with a large sign that reflects your political beliefs in black and white (or glitter)? Horns will honk! You’ll be the recipient of many unintelligible drive-by yelps from male drivers. So, kill two birds with one stone: progress your political agenda AND snag the attention of men.

Though commuting to work in the comfort of your own vehicle is, well, comforting, you’re missing out on opportunities to connect with men who utilize public transportation. You can help save our delicate ozone layer by riding the bus AND be on display for male commuters.

Men on the bus have nothing else to occupy their commute time, therefore, women can bask in the glory of the male gaze.

Oh, to be given a man’s undivided attention! If you’re as fortunate as me, men on the bus will offer marriage proposals as well as sips from 40 oz beers (because sharing is caring). Public transportation is environmentally friendly and much cheaper than your local bar’s Speed Date events.

Adopt a Vegetarian or Vegan Diet

Reverse psychology is another route to gain male attention. As a woman, we’re a flirtatious bunch and therefore “no” means “yes.” Every day is “Opposite Day.” For example, during a dinner date women may order a salad with a side of air, clinging to the hope that their male date will insist they consume actual nutrients. Better yet, the man should order their lady’s meal, thus relieving the woman of all decision-making. Let’s take this idea one step further: my vegetarian and vegan friends are constantly offered meat for the simple reason that they don’t want it. So, they must want it, right? And so, men everywhere will offer their meat to women upon hearing she won’t eat meat. They’ll insist on delivering their “special sausage” to women’s mouths. A romantic, home-cooked “man meat” meal is in your very near future if you adopt an animal-friendly diet. Vegetarianism and veganism is proven to lower one’s carbon footprint, a noble political act, but another benefit is the constant offer to be spoon-fed “something special” by men.

The fact is, men are invigorated by politically active women. There’s just something about an outspoken woman that gets men’s blood pumping. Politically-minded women are an irresistible target for men! So, if you’re single and ready to mingle, keep your politics close and you’re sure to attract the attention of men.