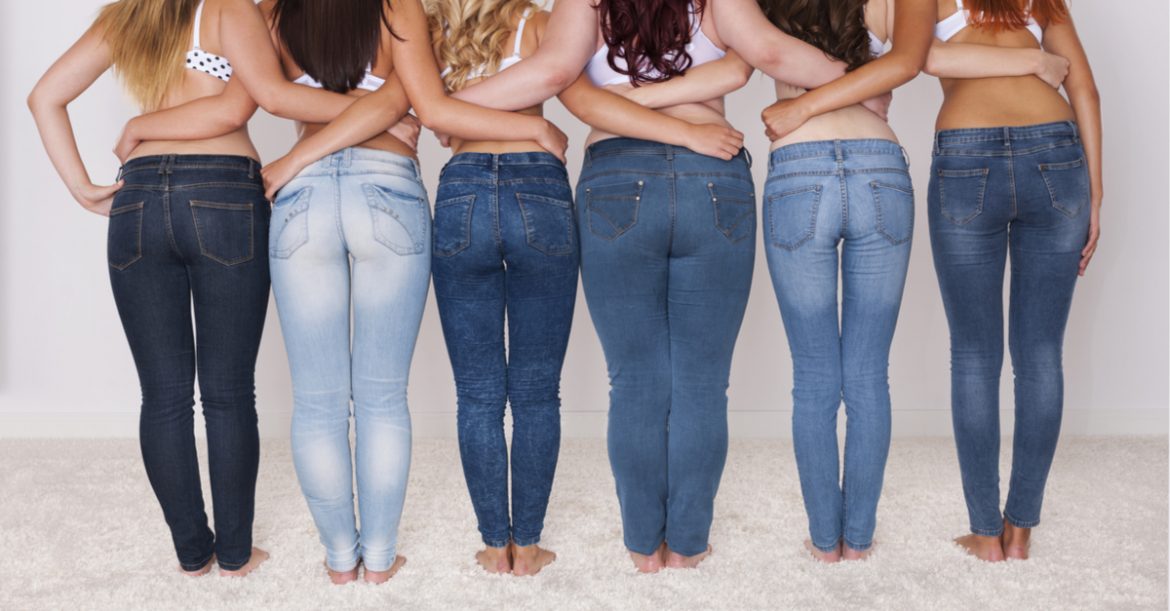 Let Me Eat Cake in my Stretchy Skinny Jeans, OK?

Americans have an unusual relationship with jeans. Technically I’m an American; I was born here and currently reside in this United States of ‘Merica, but I don’t connect with certain pastimes such as loving jeans. Pajama jeans yes, but ‘ol demin without an elastic waistband is blacklisted along with decaf coffee and the coffee enema trend.

Being a pear-shaped lady, even at my thinnest, my lower half rejected jeans. There was a brief moment where big booties were accepted into the jean industry – society called these items Apple Bottom Jeans. However, being a sexually-terrified teen, I refused trying on the Apple Bottoms for fear I’d be sexually assaulted like the women in music videos.

I managed to dress myself during my teens by shoving my lower half into purple and teal articles of clothing that passed as jeans. These “jeans” were found in the Plus Size Women’s section. Already self-conscious of my body, there was a new, special kind of shame experienced when forced to trudge to the Plus Size section. Instead of seeing my peers, I was shopping alongside mothers and grandmothers.

I’d always been mature for my age, but this didn’t feel like a compliment.

Then the Skinny Jean appeared. This trend went against every episode of What Not to Wear. I was shocked it became so popular because fashion gurus Stacy London and Clinton Kelly were adamant that anything other than wide-legged jeans created an “ice cream cone” affect. I absolutely did not want to be compared to an ice cream cone. I’d already survived a beat-poetry-esk taunting from teenage boys, their similes something along the lines of:

Your butt is as big as a whale

But I’m stupid as hell

Alright, I may have embellished the last two verses.

Skinny Jeans continued to rise in popularity. I resisted them since the name was a personal attack on my pear-shaped self! I was not skinny, so why attempt to wear something literally labeled NOT FOR YOU? After years spent glaring at Skinny Jeans, some manufacturing genius released Stretch Skinny Jeans. Hmm, now this intrigued me. All my clothing must be multi-functional i.e. clothes must be comfortable enough for me to nap in at a moment’s notice. My nap-tastic clothing requirements can be quite limiting, so I was forced to try Stretch Skinny Jeans in an attempt to diversify my wardrobe, or whatever you call that pile of laundry on my bedroom floor.

I am now the proud owner of three pairs of these Stretch Skinny Jeans, all fashioned with elastic waist bands. As the goddess intended!

Some years I gain a few pounds and some years I lose a few pounds. As my body fluctuates, I do the rational action and donate items that no longer fit. Which brings me to another aspect of ‘Merican jean behavior that I do not understand…

It seems every woman I know clings to an old pair of jeans. Perhaps she wore these size 6s in the mid-90s during her rave phase. Perhaps these are the jeans she wore in high school, which is even more perplexing as I’ve burned everything that reminds me of high school.

Sentimentality is not my forte, along with forgiveness and shaving my pubic hair.

When I dig deep into the imagined psyche of my fellow ladies, I begin to understand this tendency to hang onto old, ill-fitting, guilt-inducing, body shaming jeans from yesteryear.

Jeans are a memento. A remembrance of a time once thinner and supposedly happier, as memories often trick you into thinking you were happier because you were skinnier but really it was because of the hypoglycemia masking itself as manic energy. But I digress.

Old jeans are usually kept neatly tucked inside a drawer, and dug out of their shame space occasionally, probably when ladies rotate their seasonal wardrobes.

I don’t like clothes enough to have a wardrobe based on seasons, but I saw this on television once, so I guess it’s a thing. Now that jeans are out of their shame space, jeans are held up to the light, similar to how Simba in the Lion King is regaled. Oh, what beauty! What promise of a better life this item bestows! You were this size long ago; surely you can be it again!

Headlines state the average American woman is now a size 16. A few years ago, the statistic claimed a size 14, and before that, something smaller. I don’t understand how these figures become newsworthy, but suspicion tells me even though our country refuses to improve basic food security along with refusing citizens adequate healthcare, these headlines act like intentionally splashed fuel on our fat shaming culture.

We American ladies are getting larger and yes, everyone is noticing. And commenting. And sending you unwanted Facebook event invites to Herbal Life parties.

Being a fat lady is interesting, especially when others feel the need (and entitlement) to comment on my body. I wonder if these entitled commentators really believe interactions would unravel like so:

“Hey you, fat lady! Did you know you were fat?”

“Yeah, I just thought you should know.”

“Thank you so much!”

Instead, these conversations leave me feeling 1) angry enough to slap a bitch, and 2) like I want to disappear. I have a feeling society wants me to disappear as well, so my instinct is to rebel and keep on appearing in public spaces as my fat self.

This Fat Lady Disappearing Act is performed at most clothing stores. I enter store, search for my size, and…nope. You might not know this, but clothing stores actually double as magic shows for fat ladies; now you see her, now you don’t! Clothing stores are sneaky in how they banish fat people, but their tactics remain effective because I haven’t walked into an Abercrombie for ten years.

Their existence seems rather arbitrary, similar to men’s expectations of me to smile every moment. I’d rather walk around in a muumuu with a comfortable frown and call it a day. However, there’s a stigma against fat people in muumuus and I don’t want to give fat-shamers easy material for mockery and hate speech.

Fact is, as a representative of fat ladies, I am forced to wear jeans and appear relatively put-together. Perhaps if society sees fat ladies like myself looking “presentable” they’ll think twice before commenting on our bodies. Maybe, just maybe, we’ll finally be seen as people rather than the subcategory of fat people. The body-positive movement is making traction, but a unifying quote is needed for everyday interactions. At first thought, reviving the quote “Let them eat cake!” sounded appropriate. At second thought, considering how food-positive Marie involuntarily lost weight via the guillotine…I am open to suggestions.

Come on ‘Merica. You know you want my money. If you drop more jean size options on me, I will surely drop some cash into your pocket. I also know that you won’t appreciate me walking around in public with nothing to cover my nether region. After all, I don’t shave my pubes.

Maternity and Me, How I Embraced My Mom...