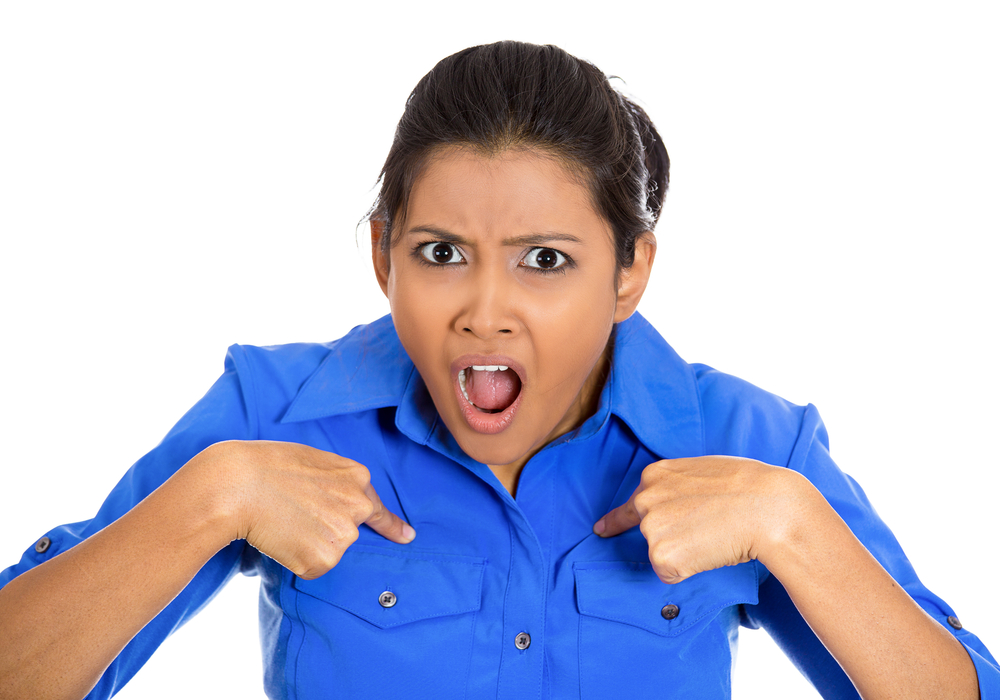 Lock Up Your Boobs – They’re Trouble

Maybe your nipples stand erect in the slightest breeze and you wear “nipple covers” whenever you leave the house. (By the way, when I Googled “nipple covers,” an article on using pantiliners to make your own popped up. So, if you’re looking to save money…) Or it could be that you are wide-breasted and when you turn around suddenly, you accidentally boob-slap anyone in the vicinity. Or perhaps your breasts are so pendulous that you can do a tassel dance without tassels.

Whatever your boobal situation, chances are yours have been a source of consternation and embarrassment for you.

I know mine have. Once a surgeon, who was being paid to remove a what turned out to be benign lump, told me that my boobs were like “small bags of gravel.” Had I not been anesthetized, I would have yelled back, “Oh yeah? Well, your balls are filled with dust!” Tit for tat, right?

Despite his horrid bedside manner, the doctor’s “bags of gravel” comment was mostly true.

I don’t know what’s in your boobs (marshmallows? pudding?), but mine are lumpy, bumpy, and all too often grumpy.

Back in the days when I ovulated, I had a strict “do not enter the room for 3 days” clause in my marriage contract for fear my then-husband would accidentally brush up against my sore and rocky breasts and I’d accidentally bite off his head like a female praying mantis does to her mate.

My shower breast self-exams have always been less like “Where’s Waldo” and more like “Where Isn’t He?”

I’m lucky I even have boobs, though.

Until I was 17, my chestal area resembled the Maldives, an island chain in the Indian Ocean that is described as “the flattest country on earth.” Boys in middle school and high school teased me ceaselessly, until I started stuffing my undershirt. I wore a white tank top under everything because my dad refused to buy me a bra. “I need a bra more than you do,” he insisted. And it was sadly true, even in the 11th grade. When I stripped off my blouse at home and stood looking at myself in the mirror, I looked like a short old man who stored toilet paper in his shirt for possible nosebleeds, but at least there was some contour out front. Ah, the subterfuge young girls learn just to stop the bullying.

Even after they grew in, my boobs were mostly medium-ish and didn’t often get in the way of my daily life.

Not like my friend Debbie, whose breasts regularly popped out of the top of her shirt like Meerkats on the alert for nearby lions. Or my co-worker, Sue, who loved to golf, but complained she couldn’t putt well because her uni-boob was in the way. Or my friend Lisa whose G-cups were so heavy she adopted a permanent arm-crossing pose just to prop them up. We went to yoga class together once and while in downward dog, she nearly suffocated.

But even my negligible boobs have gotten into their fair share of trouble. Once, while debating in college, both straps of my “convertible” bra (it converted from regular straps to criss-cross to strapless) came undone and while I was talking, my bra slowly rolled down my body. By the time I sat down, it was more of a belt.

Oh, and my first mammogram caught on fire. You can read about that experience here. Believe me, you never get over something like that. I still carry a fire extinguisher with me whenever I have a mammogram. Better safe than stuck in the boob-smasher with the fire department nowhere in sight.

And once, I got a weird rash that could best be described as “athlete’s boob.”

The cream that was prescribed turned my nipples fluorescent green. I was tempted to go down to the airport to see if I could bring planes in.

Of course, none of us would have any trouble with our breasts if we’d just buckle down and buy a new bra – at least that’s what the “bra scientists” want us to believe. The ads shout at us on Facebook and Twitter and television. “80% of women are wearing the wrong size bra!” “Wearing the wrong bra can cause your breasts to sag prematurely and your voice to sound like James Earl Jones’s!”

There have been so many bras that promised magic but fail to deliver throughout the years.

The Wonderbra, which unfortunately could not create cleavage from stomach fat (don’t ask how I know). The Water Bra, which was not advised for hot-flashing women unless they wanted to boil pasta while in a business meeting. The pump-up bra, which was a good choice if you regularly flew over water – you could pump it up to maximum capacity to serve as a flotation device. A company even took out a patent on a Mood Bra, but really, do you need your lingerie to tell you what mood you’re in? I can tell just by checking for cookie crumbs in my cleavage. If there are crumbs, I’m depressed. If there are no crumbs, I’m happy because I ate the crumbs a few minutes ago.

Maybe we just need to accept that like 2-year-olds and puppies, our breasts are always going to be trouble-makers, whether we’re wearing a $60 bra promising the world, an undershirt full of toilet paper, or panti-liner nipple covers.