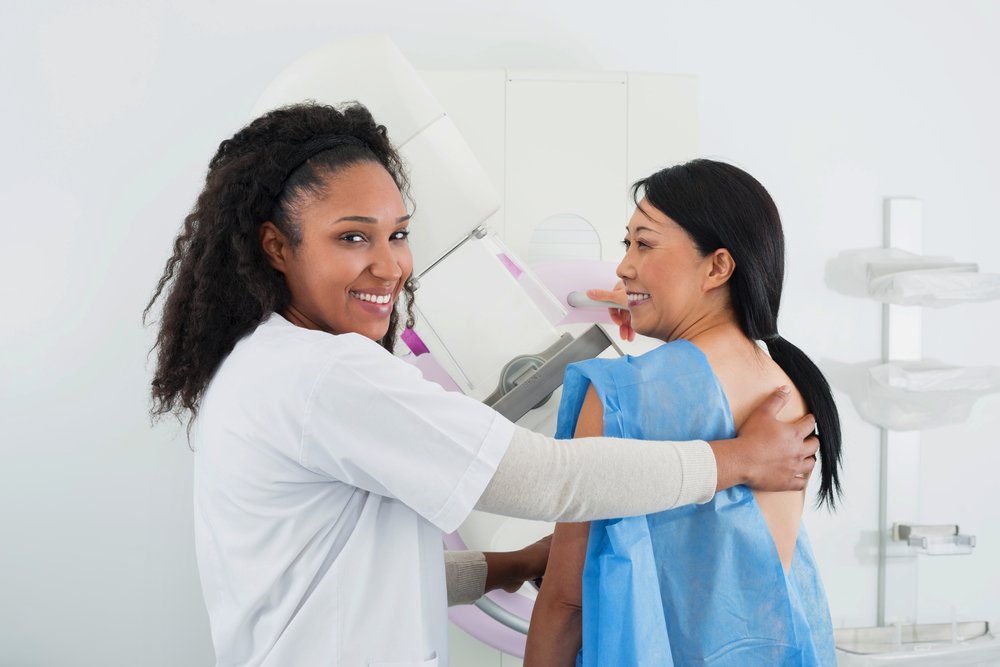 The Nitty Gritty of Squeezing the Titty: There’s Much More to a Mammogram Than Saving Lives

written by Adina Gillett May 7, 2018
FacebookTwitterPinterestEmail

I know what you’re thinking: Adina has to go get a mammogram, and she’s likely pretty put off about it.

I mean, who wants to get a mammogram?

For starters, they’re painful. Putting our girls between two sheets of glass and then having them pressed down flat like an orange in a juicer is a practice that would impress Torquemada, and surely must be forbidden by the Geneva Convention.

Whenever I’m locked in that contraption, I keep hearing the ubiquitous mom voice in my head saying, “If you cross your eyes, they’ll stay that way”, and getting visions of living out the rest of my life with boobs shaped like the two-dimensional prison from Superman. Beyond the pain and irrational fear of mutilation, mammograms are just plain awkward, from the robes that tie in the front to the cold little pit wipes you have to use because you forgot the ‘no deodorant’ directive.

In our belted-and-tucked society we only show boobs under very specific conditions, and in burger commercials.

It’s quite disarming to suddenly cast aside our proprieties and bare it all to a stranger, whose job it is to lady handle our breasts like a meat packer. Yet despite all of these entirely legitimate beefs, I have a confession to make, one that will forever out me from this comfortable closet I’ve been keeping residence in ever since my first mammogram in 2012.

“Now wait, hold on!” you say, and rightly so. This makes no sense at all. On paper, mammograms are the worst. Yet in practice, after I leave the clinic, once again belted-and-tucked, I can’t help but notice that I’m experiencing this blissful calm that is near euphoria.

For all you ASMRtians out there (no? okay, that’s for another article) imagine it’s like ASMR (Autonomous Sensory Meridian Response), but in your boobs and not your scalp. I think it’s something to do with being completely stretched out in a way that never–and should never–happen at any other time.

Think of it as a chestgasm.

I was in Thailand a few years ago and was told that a real Thai massage was an experience not be missed. So, we signed the whole family up: massages for me, my husband, and two kids. My son and husband got the first time slot, while my daughter and I waited on the spa deck in our soft robes, sipping sweet hot tea and listening to the blue and orange birds sing over the tumbling brook below.

The door opened and my husband and son emerged. They both looked…confused. I gave my husband the raised eyebrow and said, “Well? How was it?” He thought for a moment and said, “It was very…personal.” Personal? Hmm. I checked out my son to see if he was distressed or traumatized, but he just looked amused. Concluding that nothing awful had transpired and that it was safe to proceed, my daughter and I walked in for our massages.

It is fair to say that ‘personal’ was an entirely accurate, yet incomplete, descriptor. Yes, the massage was incredibly personal; the practitioner emotionlessly gets right up in your junk while she is stretching out all of your parts.

Imagine someone doing yoga to you.

Pulling your legs here there and everywhere, contorting your arms hither and fro, twisting you around like a pipe cleaner and then unraveling you again. It was less of a massage and more of being made into bread. And the most astounding part of it all was that, when it was finished, the woman had French braided my hair and I hadn’t even noticed.

We walked out of the room and I felt dazed. It was the oddest combination of euphoria and violation, but the euphoria was totally winning. There was absolutely nothing inappropriate or sexual about it, so the violation was purely a reflection of my own emotional clumsiness to being touched that way.

It made me keenly aware of the hands-off bubble I tend to activate when I’m out and about, and how the leap between belted-and-tucked to Thai massage and mammogram is like the Grand Canyon. Maybe it’s a cultural thing. Maybe it’s a me thing. It’s definitely something. It’s hard not to speculate that the presence of this Grand Canyon might account for some body image issues.

It’s tough transitioning from zero to naked with no prep. Just ask anyone currently suing our President.

My doctor might be thinking that reminding me to get my annual mammogram is really just about smart, preventative health care, and it is. But what she doesn’t know is it’s also the closest thing I’ve found to a real Thai massage stateside, and a great reminder that sometimes I have to get out of my comfort zone to get into my comfort zone. I could do without the pit wipes, though.