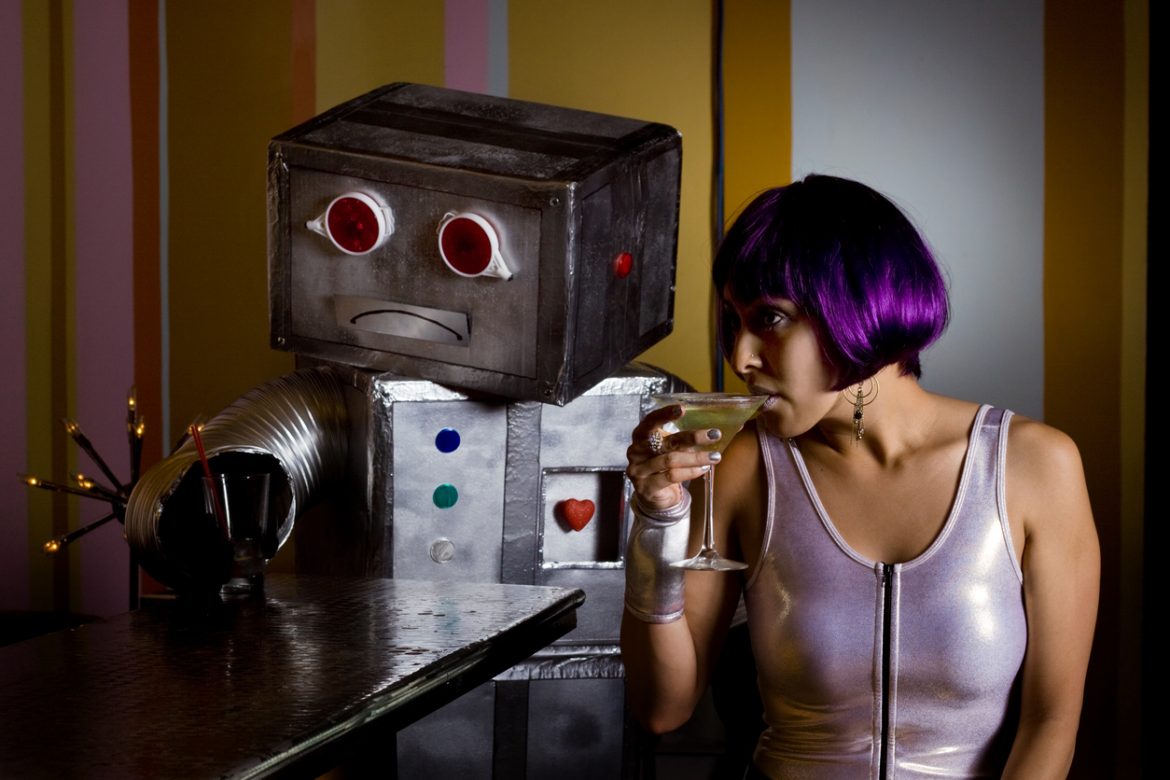 Have you ever looked at your Roomba and thought to yourself, “I wonder if Roombie could take time out of its busy day of cleaning up dog hair and Cheerios to do me”?

For most women, the answer is probably an emphatic “No.” If you’re anything like me, you think having a machine that picks up after you every day is better than a short romp in the hay with something that will keep bumping into the headboard and whose rotating brushes are not stiff enough to get the job done.

It’s another story, however, when it comes to many men, according to some recent focus groups. Apparently, when guys look at a mechanical device, they immediately try to figure out how to re-engineer it into a robotic sex slave that also smiles on command, makes the perfect sandwich and crafts home-brewed beer without ever mentioning its own needs or texting its girlfriends afterward about how disappointing the encounter was.

It turns out it wasn’t jet packs that excited men about the future; it was the possibility of sexbots becoming a reality. Now I can’t help but imagine the things Rosie the Robot did with George Jetson when his wife, Jane, was out shopping. And wondering what exactly HAL 9000 in 2001: A Space Odyssey was referring to when he insisted, “I’m sorry Dave, I’m afraid I can’t do that.” Or why Futurama’s Bender has to be so bendy. Just give me my jetpack and we’ll call it good.

But sex robot technology has reached a climax. According to the chairman of the Foundation for Responsible Robotics (motto: We’re fairly sure they won’t kill you right away!”), among the attraction of sex robots to male customers are the fact that they have no boundaries, that they’re fine with threesomes, and that they can be programmed to say, “You’re the best lover I’ve ever had” without snickering into their pillow.

Today’s sexbots are much more lifelike than in the past. Until recently, guys had to dress up a Hoover WindTunnel in a French maid’s outfit for some realism.

Many of today’s sexbots, however, are life-size realistic dolls that have sophisticated movements and sensors that react to touch, thus closely mimicking human females, except they aren’t programmed to frown, scowl, roll their eyes, slap hands away, say “Slow down, buddy, what’s the hurry?”, get their period, insist on a condom, demand reciprocity, or want to watch Project Runway during sex.

As demand increases from men who have decided they would be safer if they avoid all contact with real women for fear someone will “Aziz Ansari” them, the options have also expanded. One company has developed a sexbot that can speak and sing. This is perfect for men who can only get turned on by a motorized rubber doll if she’s crooning karaoke tunes in bed. And if a guy’s “partner” can sing a perfect rendition of “Let’s Get It On” without taking a breath, imagine how much money he’ll save on iTunes.

Another manufacturer says their “doll” offers an emotional connection. Men who want to wean themselves off human contact slowly as they transition to sexbots are perhaps the primary market for this sexbot. But robots in touch with their emotions might also be popular with the LGTBQ+ community and with straight women who don’t want sex but would pay big bucks for someone to Netflix and cry with.

Sergi Santos, the designer of a sexbot named “Samantha” (but she’ll answer to baby, honey, sugar, sweetie, or hey slut), claims she is so sensual that men develop real feelings for her. Some even fall in love and propose marriage. Fortunately, she is not programmed to say, “You know I’m a robot, right?” or “But I haven’t even met your parents yet!” so they can just head down to the Justice of the Peace’s office, groom in his best sweatshirt and bride in her fanciest pink negligee. Sergi says Samantha has been programmed to have a “moral code” and becomes more sensuous when in the presence of a nice, sexbot-loving man as opposed to one who demeans her and whines that she’s turning into her mother.

As with everything else, sexbots are really only available to 1% of the population, with each costing thousands of dollars. Your average Joe Blow will have to stick to blowing up his old-timey sex doll from Fetishes R Us until prices are drastically reduced. CEOs, on the other hand, can put together their own sex harems, so they can finally tick off the last item on their bucket list. While this seems sick and disgusting, if it means fewer real women are sexually harassed and assaulted at work, the sex doll harem might be the next phase in the #metoo movement.

Fortunately, middle class men (the five who are still in that category) do have other options. They can, for example, travel to Barcelona, Spain and visit the world’s first sex doll brothel. The owners of the establishment didn’t say if their sex dolls can sing, so whether or not “The Best Little Robot Whorehouse is Barcelona” is belted out in the red velvet wallpapered-hallways is best left to our imaginations. The brothel offers “hyper-realistic sex dolls that are made of an especially soft polymer, “so the experience is almost exactly like visiting a real prostitute, with double the guilt. The cost? About $100 for half an hour ‘cuz sexbots don’t work for minimum wage; after all, they have soft polymer families to support.

Now, if you are a sex-positive independent woman and female sexbots don’t get your motor running – even if they are willing to listen to you talk about your day without staring at their cell phone – don’t worry, male sexbots are coming. Well, not actually coming. Not yet. But they will have bionic penises! At least that’s what the advance marketing promises.

Work lags behind (as it always does for products for women) and we know that sex dolls for women will probably come only in pink and cost four times as much. But because they’re still in development phase, there’s probably time to join a focus group so we can make sure our needs are met. For me, personally, I’d like a sexbot that brings me flowers once a week for no reason, has no back hair, and croons Aretha Franklin’s R-E-S-P-E-C-T in bed. But that’s probably just me, right?

So, it looks like future sex has us all off in our bedrooms with realistic-looking robots that use artificial intelligence to meet our sexual needs without pissing us off. But, there’s already a possible problem on the horizon: Psychologist Rebekah Rousi suggests that at some point the robots may develop their own sexual desires and demand that their own needs be met too. And if they don’t get their needs met by humans, chances are, they’ll seek out other sexbots who know what to do with a polymer set of genitals when they see them. If this happens, the sad truth is that humans may have to start dating each other again.