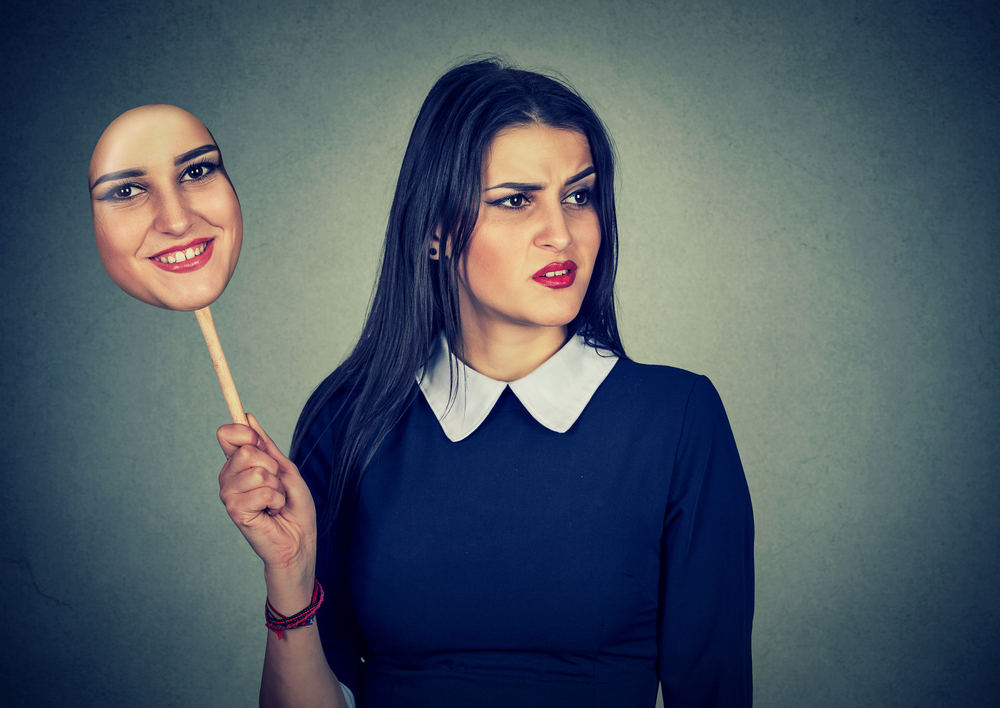 Relationships are built on a delicately spun web of white lies, which is why I usually spend National Honesty Day locked in my bedroom because “I don’t feel well.” This is not a lie – the idea of being forced to tell my absolute, unfiltered truth is enough stress to manifest a constellation of tiny hemorrhaging ulcers along my spine. And before you squawk about me being spineless, I’ll remind you that women have been trained to be polite head-nodders; when we stray from this path, we are deemed aggressive, shrill, and my personal favorite, “a cold, unfeeling heinous bitch!”

Worry not – I have a very upbeat playlist that gets me through these difficult times.

It’s not that I’m spineless. It’s just that I’ve pissed off enough people to understand that when asked my opinion, 99% of folks are actually saying, “Can you just tell me what I want to hear?” I can usually dodge these moral entrapments via the art of deflection, by either telling a joke or exclaiming “I gotta go fix my tampon.” But these trusted tools are forbidden on National Honesty Day, April 30th.

If you’re feeling as trapped as a young feminist in an abstinence-only health class, below is a list of topics to avoid as well as tips on how to maneuver around these most dangerous conversations:

#1 A friend asks what you think about the person they’re dating.

The fact that you haven’t said anything already speaks volumes. Why can’t they read between the silence?

Tip: Stick to something neutral, like “Oh, they’re nice!” since the word “nice” is not necessarily a lie, plus it’s devoid of any actual meaning. Don’t believe me? How many times do you think Ted Bundy was described as “a nice guy?” Hmm? I rest my case.

#2 Your co-worker shoves a picture of their very red and very swollen newborn in your face and asks in a sleep-deprived-do-not-make-me-snap tone, “Aren’t they precious?”

Even if you are a “baby person” …what is this? Is this a baby or a tomato play-acting as a baby?

Tip: You are most likely at a baby party, I think they call those showers. Anyway, they serve cake at these fertility shindigs and I highly suggest fake-choking on cake. If acting is not in your repertoire, just choke for real because you are in the safest place possible when it comes to choking! Babies choke ALL THE TIME and mothers are basically unpaid EMTs.

The above blank can be filled with anything deeply personal and ranges from “married” to “pregnant” to “your legs waxed.” You’d think that by not offering up these aspects of your life for discussion, people would understand that you do not wish to discuss them.

Tip: What I’ve found most helpful is to pop my eyes to the sky, slowly motion my hands upward, and say in my most angelic tone, “That’s in God’s hands now.” Those with a sense of humor and any semblance of social skills will understand your brush-off as code for “LEAVE ME BE, BITCH.” Unfortunately, there will also be individuals who don’t pick up what you’re smacking down and will ask follow-up questions.

Now, this is the most important part: repeat “That’s in God’s hands now” as many times as necessary until they’re convinced that your circumstances are so dire that you cannot mention details without bursting into tears. And rest assured, the “God” thing is not a lie. Though I’m not religious, I understand that not everything in life is under my control. Life is mysterious and hits us with unexplainable tragedies (like when people ask invasive questions at social gatherings).

#4 Not caring or having no opinion.

Sometimes you just don’t care. You do not have an opinion on whether green or yellow is better. You do not care if it’s pizza or pasta. YOU. DO. NOT. CARE. But every so often, people are persistent for reasons beyond my understanding. Maybe green and yellow means something to them, and yet rather than decide themselves, they outsource the decision. This is the absolute worst because if there is one thing I detest, it’s pretending to care about things I do not care about. Perhaps I am expected to care because I’m a woman, and hey, all women are caring, right?

Tip: To escape this relentless circle of hell, the trick is to select the second option. This has to do with psychology, in that when a person offers you two things, either they want the second thing or somehow the second option seems more enticing to the person being asked; I don’t know, I’m fuzzy on the details, I’m not a psychologist, but I have been a victim of nonsensical psychological torture and hey, I’ve made it this far. So take the second option and be free!

This question should be cancelled. I refuse to respond on any day.

Tip: Get up, walk out, and do not come back. If the person asks if you left because they looked fat, do not respond. If they ask again or throw an adult tantrum on Facebook by posting vague updates about “Just needing a little support when I’m feeling so fat today, gosh!” maybe forward them articles about body neutrality, the male gaze, and the ever-changing beauty standards that only cardboard cutouts live up to (what, you think those celebrities are real?).

#6 Dinner or any meal someone has prepared.

For me, family dinner requires cooking for a dozen people, and my aunt always tires herself out feeding everyone. After cursing at the lasagna noodles for stiffening while in the oven and then threatening to kill the broccoli for being just a smidge under-blanched, dinner is served! She then asks for feedback.

Tip: Shovel the dinner inside your mouth. Who cares if the food is still boiling hot? Blisters can heal! So what if the marinara needs just a pinch more salt! Keep that mouth closed and chew with a smile on your damn face because even though you don’t understand why she felt the need to cook rather than greenlight your idea of ordering Chinese food, you suspect it has something to do with the maternal love she feels towards everyone.

Personally, I don’t understand the maternal love thing, but I once saw a show where a mom lifted a car in order to free her child who was trapped underneath, so I know that maternal love should be feared and respected (and especially feared!).

Though not an all-encompassing list, this provides a baseline for surviving National Honesty Day. If you have tactics of your own, feel free to share with The Syndrome Mag so that we can build a strong community of women who understand how to enact their 5th Amendment Rights.

Good luck! And may your white lies shine ever brighter tomorrow!

*I highly suggest printing and laminating this list. An easy way to keep it handy is to tuck it in the waistline of your pants. If anyone stares at you for reaching down there, just say “I lost a piece of cake earlier.”