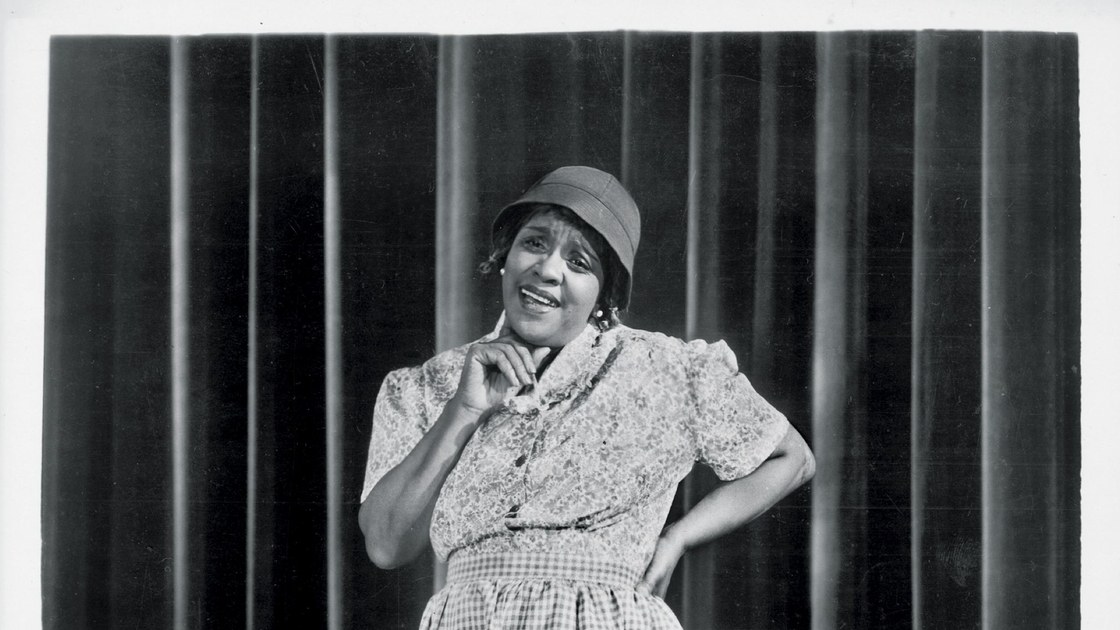 Anyone who believes in the power of comedy should be familiar with the women who forged the path and cracked, if not the glass ceiling, at least the brick wall. One of these groundbreakers is the inimitable Jackie Mabley, aka, Moms Mabley. How much do you know about Moms? Take this quiz and see.

1.   Which of the following is NOT true of Moms?

The answer is C. For a good portion of five decades, Moms was one of the country’s top comediennes (French for “someone who does comedy as well as a man, but because that makes men feel uncomfortable, we’ll add a few letters”). Billed as “The Funniest Woman in the World,” she was first woman comedian to be featured at the Apollo, appearing on that stage more times than any other performer, and earning $10,000 a week at the pinnacle of her career. (The first black woman to host SNL, by the way, was Cecily Tyson.)

a.   Highly sexualized and glamorous
b.   A floppy hat, big housedresses, and a toothless grin
c.    Striking red hair
d.   Whatever clothes happened to be clean at the time

B is the correct answer. The silliness of her persona allowed her provide commentary on sensitive topics such as racial bigotry in a way that came off playful instead of outraged. Offstage, Moms was often was glamorous and chic. (A few notes: Phyllis Diller, another groundbreaking female comedian adopted a similar style when she started her career a few decades after Moms. The most famous glamorous and highly sexualized funny female of all times has got to be Mae West. Red hair was the staple of Lucille Ball and Carol Burnett. Also, Carrot Top, but we don’t talk about Carrot Top.)

3.  Moms told a lot of jokes at the expense of older men. What fueled those jokes?

a.  Being forced to marry an older man at a very young age
b.  Growing up with lots of brothers, many of whom were much older
c.  A long-running feud with Sigmund Freud
d.  Having to play older men on vaudeville

A is the correct answer. Moms’ early years were filled with trauma, including the deaths of both of her parents at a young age, poverty, alcoholism, and having been raped twice and gotten pregnant both times. She was so skilled at turning personal tragedy into comedy and doing so in a way that evoked raucous laughter. Comedians like Tig Notaro, who turned her breast cancer scare into comedy, have followed in Moms’ footsteps.

4.  Because she played primarily to black audiences, Moms wasn’t well known or celebrated among white audiences until the ‘60s. Then what happened?

a.    She appeared on Soul Train
b.    She played Carnegie Hall in 1962
c.    Her housecoat got caught in an elevator, leaving her completely naked in a hotel lobby
d.    She got a regular role on Rowan & Martin’s Laugh-In

B is the correct answer. Moms’ Carnegie Hall performance was quickly followed by invitations to appear on the TV shows such as The Flip Wilson Show, Rowan & Martin’s Laugh-In and The Smothers Brothers Comedy Hour, thus bringing her even more adulation and popularity. (Chelsea Brown is the black comedian who appeared in a recurring role on Rowan & Martin’s Laugh-In during the ‘60s, alongside other female comedians such as Lily Tomlin, Goldie Hawn, and Ruth Buzzi. As far as I know, no female comedian had a housecoat ripped off her by an elevator, but I could wear one the next time I’m at the Hilton and see if I can make it happen.)

5.    Moms released more than 20 comedy albums. Which of the following was NOT one of her titles?

The answer is C. Why Am I Straight is a Whoopi Goldberg album. Coincidentally, Whoopi produced a documentary about Moms, whom she considered one of her idols. Also, Moms would only have made an album with that title with her tongue firmly planted in her cheek because she was a lesbian. That’s right, one of the most popular comedians between 1920 and 1960 was a black lesbian who talked about racial issues. Now you know why so many comedians consider her to be such a groundbreaker.