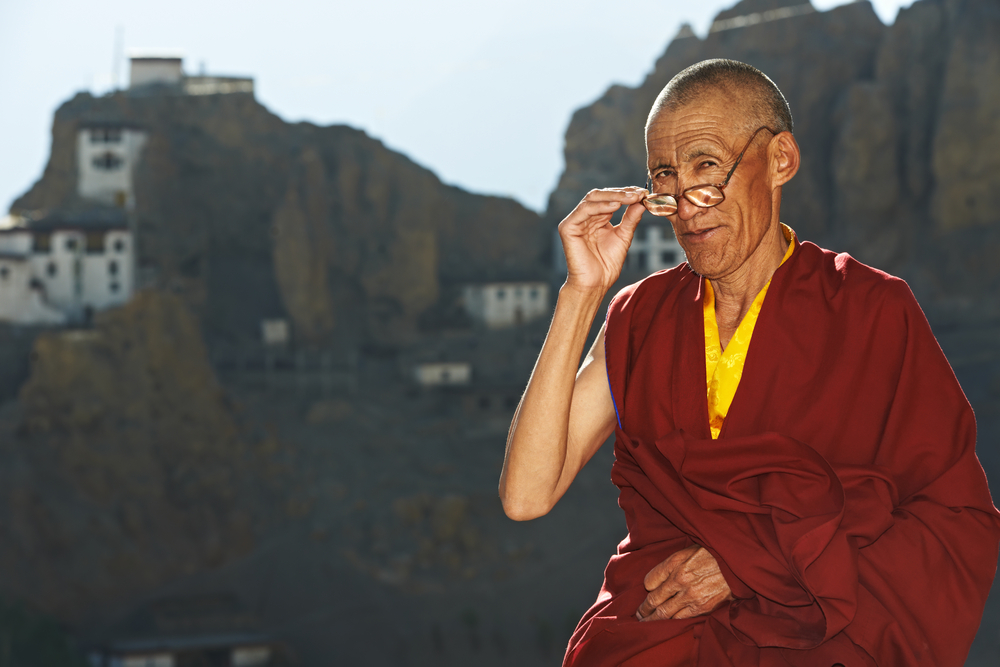 Why You Should Swipe Right on a Buddhist Monk

The other day, my friend Leslie and I were doing the usual lament about how hard it is to meet sane, available men. Not just straight and unmarried men. But, truly sane men without baggage – no carry-on, no check-through.

“If I have to spend another date watching some guy lick his fingers after eating chicken wings,” Leslie said, “I’ll slit my wrists.”

“You think that’s bad?” I whined. “My last date was in the last millennium. “And, he was my therapist’s grandfather, for God’s sake!”

“Cheer up,”I told Leslie. “There is a solution. Date a monk.”

“Hear me out,” I told her. “You have got to change your attitude about the kind of men you are willing to date. Think outside the box. It worked for me.”

“You mean one of those guys who lives in a convent, making date-nut bread and weaving baskets?”

“No!” I answered. “I’m not talking about scouting for Friar Tuck in the backwoods. We live in a multi-cultural city that boasts men of all ages, religions, and countries of origin. Think about it.”

My saving grace was hooking up with a Buddhist monk. I know, what could a guy like that possibly offer sophisticated urban women like us?

“Those guys are celibate, aren’t they?”

“In theory, yeah,” I replied. “But, don’t believe everything you hear.”

So, what’s so great about dating a monk?

Are there any downsides to dating a monk?

Well, the constant cheerfulness can be annoying. He’s always agreeable, never criticizes, is always open to new things. What’s that all about? I mean, nothing gets to him. He sees goodness in everything and he will not fight. Believe me, that’s not as refreshing as it sounds. I cannot get a rise out of him, no matter what. I mean, what’s the use of having a relationship if you can’t have a good fight now and then?

His calm demeanor was especially annoying because I live in New York City, where complaining and finding fault with people is a way of life. If a New Yorker comes across someone who’s nice, it’s code for naïve and stupid, a pushover. So, I was frustrated because he was giving me nothing to work with. No faults, no drama. Nada.

And, then there’s that damn smile plastered all over his face. He smiles. All. The. Time. Sometimes, I just want to slap the smile off him. Nobody can be that happy!

Another thing: He always listens to me. He pays attention. He supports me. Respects me. Having never come across this in a man before, naturally I was skeptical at first. It got on my nerves. But, I got used to it.

When you’re dating a monk, you have to be careful not to sabotage things. After months of putting up with his happy demeanor, I was beginning to wonder whether we really were compatible. Did he like me or did he just like everyone?

Finally, I just couldn’t stand his “sereneness” any more, so I broke up with him. No more hugs, no more foot massages. No more undivided attention. No more nights of slow, meditative Tantric sex.

My God, what was I thinking? Breaking up with the perfect guy! The next day, I came to my senses and called him. And, you know what? He took me back right away, no questions.

So, despite his sunny disposition and overly positive attitude, I decided to keep him. Because it’s hard to find a good man in this God-forsaken city.

And if you decide to heed my advice and date a Buddhist Monk, I have some tips: