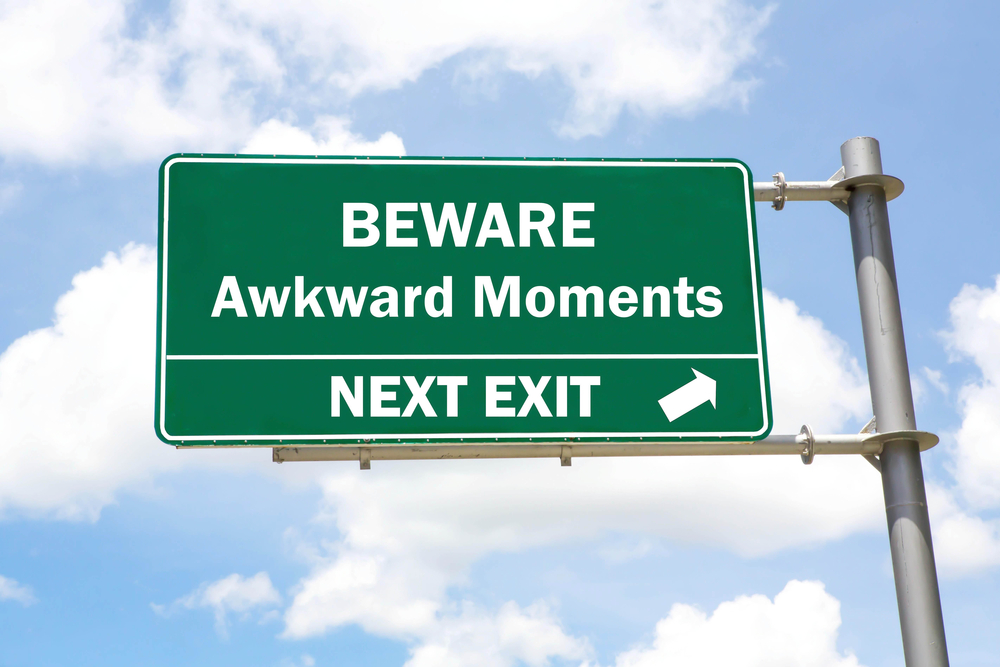 Hey, it’s Awkward Moments Day! If you read my last article for Syndrome, about that time that I passed out on the world’s tallest Oompa Lompa, you might get the impression that – when it comes to awkward moments – my life is somewhat an embarrassment of riches. Well, sorry to disappoint you… Ah, who am I kidding? I was MADE for this article. This is MY day.

I may be the Queen of Awkward Moments – here’s my resume:

Should I tell you about the time I gave my mum my old cell phone, and while we were waiting for phone numbers to transfer and update, my fling of the moment sent, shall we say, a very enthusiastic text to my old number. Yes, my shag buddy sexted my mother. To make it even more awkward, my mum forwarded these texts to me, along with a score out of 10 for said fling’s suggested “activities.” Extra points were awarded for enthusiasm, gymnastic prowess, and photography skills.

Or should I tell you about that time on the London underground, when in an attempt to eat a *massive* iced doughnut without smearing my red lipstick all over myself, some of the fondant icing fell in my cleavage. Without stopping to think about where I actually was, I fished said icing out of my bra, and accidentally locked eyes with the person sat opposite me while I ate it. I committed two British crimes here. One, I made eye contact on the Tube. This must NEVER happen, and for breaking this unspoken rule, I will be going straight to hell. Crime two: In my sugary, fondant icing paradise, I forgot that I was not alone, and should probably not eat food from my bra. And I definitely should not have defended myself by saying, “This doughnut cost me six quid. I’m not wasting ANY of it. Six quid, I tell you!”

I could tell you about that time that I arrived at work, and fell out of my car for absolutely no discernible reason. I thought I’d styled it out and no one had noticed, until the security guys arrived at my desk to check I was alright. They pointed out that I had parked right in front of the security cameras, and they’d had an excellent view of my epic pratfall. They were slightly concerned I may have broken my ankle.

But no, I’m going to tell you about the most awkward professional meeting of my thus far not-really-distinguished career. I was working for a car hire firm as the fleet manager for a popular French brand. (To this day, I know squat-all about cars, and I’m still perplexed as to how I got this job in the first place).

I had a meeting with the brand manager, and my Managing Director decided that he too should be in this meeting. He also invited along my press fleet counterpart, who was the golden boy of the office. Of course, at the beginning of the meeting, I was asked to make the coffees, so I missed the first 10 minutes of MY OWN MEETING.

When I came back with the various forms of caffeine, my MD then asked me to take notes. I say he asked me, but actually he asked some chick called Anne Marie. After a quick check to ensure that I was the only one in the room in possession of a uterus, I realised that not only had my manager hijacked my meeting and invited along someone who had no business to be there, made me do the drinks run and take the minutes, but he’d called me by the wrong fucking name. In front of my client.

And throughout the meeting, he continued to address me by the wrong name.

“Yes, that’s a great point, male colleague who shouldn’t be here – make sure you note that down, Anne Marie.”

“Could you make that event booking, Anne Marie.”

“Would you grab us another round of coffees, Anne Marie.”

This kept happening throughout the meeting, despite my client pointedly addressing me by my actual name of Laura-Anne. It was excruciatingly awkward, mainly because my manager just didn’t notice that he’d got my name completely wrong, and carried on blathering away in blissful ignorance.

Once my client had left, my manager asked Anne Marie to make sure she typed up the minutes and emailed them over to him. It was at this point when I said, “Jeremy, who the FUCK is Anne Marie? Is she invisible? I didn’t see anyone by that name in the meeting. Was she sitting behind a one-way mirror, noting all of our facial expressions, checking for signs of psychopathy?! Seriously, who the fuck are you talking to?!”

I had worked at this company for six months. I sat two desks away from the MD. I spoke with him on a daily basis. He was the person who actually hired me. And he couldn’t see the problem with getting my name wrong repeatedly, in front of my biggest client.

Yeah, that one tops the list of seriously awkward moments. Along with the time my partner made me come so hard that I farted. In his face. Awks.