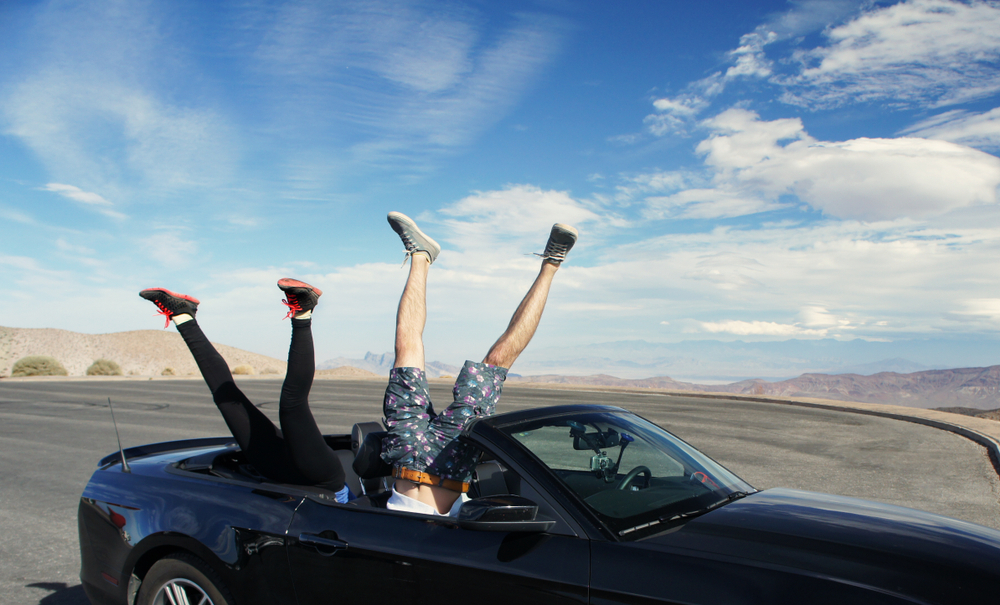 Head Over Wheels – A Crash Course in Bad Romance

I haven’t been on a lot of bad dates. I have a strategy that prevents this problem – whenever I date someone, I sleep with him right away and he asks me to marry him almost immediately, and then I’m kind of tied up for the next 5-10 years. Not literally tied up. Well, once…

Every time I sleep with someone I end up saying “I do” to more than just “Do you like to be on top?”

I probably shouldn’t be allowed around men. If there’s just one lonely guy, perhaps loaded up on Cialis and looking for a good time with no attachments, all he’ll have to do is glance my way and boom, we’re Googling for a Justice of the Peace and an Elvis impersonator.

So when it comes to bad dates, I’ve mostly avoided the bullet. Before I get too far into the details, let me just add a legal disclaimer: in order to protect the possibly felonious, I’m going to refer to the man in this story as Bad.

Bad and I met dancing in a club for middle-aged folks. I wore a short skirt and heels, the regulation cougar’s costume. Although I think of myself more as a puma because they sound thinner and faster. Bad had muscular arms, tight jeans and was wearing an Indiana Jones hat. And I’ve always had a Harrison Ford thing. I don’t care that he’s 100 years old now, he’s still sexy.

By the end of the evening, Bad had my number scribbled on his muscular arm in Sharpie pen.

Two days later, he calls. “Do you want to go on an adventure?” he asks. I think maybe we’re going for Thai food or something equally exciting. That’s my idea of an adventure. “Wear comfortable clothes.” he adds. Okay, that was intriguing. I change out of my thong – I jest! I don’t wear a thong in the traditional sense because I use them as hair scrunchies. I put on jeans, a t-shirt, and tennis shoes. Maybe a picnic in the park?

Bad has other plans. He shows up in a 4-wheel drive Jeep and slaps the passenger seat. “We’re going 4-wheeling in the mountains!” I tentatively take a seat inside and strap in.

Shit, what have I gotten myself into?

Soon we’re racing up a dirt road in the mountains. If you can call it a road. I call it a squirrel path. The ride is as bumpy as a flight over Denver. I swear an oxygen mask fell from the ceiling and the flight attendant threw up in the back. When we finally get to the top of the mountain and Bad shuts off the Jeep, I take a few seconds to reapply my lipstick and put my kidneys back where they belong.

We take a long hike and I have to admit, it’s romantic. We kiss. He talks about how this is bear country but not to worry because he’s got a gun in his pants. I realize he’s not as turned on as I had thought a minute ago when I didn’t realize that was a gun. We kiss some more. It is pitch black. I swear I hear bears breathing all around us.

Finally, it’s time to leave. We hop back in the Jeep. The road we’re on is approximately the size of my hips and drops off about 4 miles on my side.

As he’s steering us down the treacherous road, Bad thinks “You know what would be nice? Some romantic music.” So he reaches for the radio knob. As he does, the Jeep veers off the road and starts to…roll…down…the…cliff.

It’s roof down, roof up, roof down…the Jeep finally comes to a stop when we hit a large tree. I assume it’s a tree and not a bear, and I honestly don’t care which it is at this point. I can’t really see in the pitch darkness. We’re hanging upside down by our seatbelts with broken windshield pieces all around us – the shards sparkle like the stars. So romantic!

Even though my heart is beating like a hummingbird on meth, I am outwardly calm. Bad seems to be hyperventilating. Or perhaps having a heart attack. Yeah, that’s it. A heart attack. Wouldn’t that be just the way to end this lovely date? Me all alone in bear country with a dead Indiana Jones in an upside-down Jeep.

But no, he’s okay, just shaken up. I unbuckle my seatbelt and fall onto the caved-in roof of the car. Bad can’t get out of his seatbelt, so while he hangs on to the floor, I unbuckle him. He lands with a thud. “Well, this blows,” he says.

Not I’m sorry, this is all my fault. Not I usually don’t imperil the lives of women on a first date. Not I promise never to call you again, here take all my money for your trouble. No apology. None.

We scramble up the muddy hillside back up to the “road.” I beat him up the hill. I think about leaving him there, but he may come in handy if I have to outrun a bear. We hike for three hours down a pitch dark mountain. He calls a friend who arrives 90 minutes later to pick us up. I still haven’t whined, or screamed, or threatened legal action for my bodily damages endured. I’ve entertained murderous thoughts, but I kept them to myself.

That night we have sex. I figured I deserve it, right?

Three nights later, we’re at Bad’s apartment (which is slightly larger than his now crumpled Jeep). We have sex again. Afterwards, he says, “I think I might have to marry you.” I can see his perspective. I am willing to go out with and have sex with him after he nearly kills me in the woods, so I really am quite a catch.

We got married on Friday the 13th. Of course we did. Our wedding was in the bar where we’d met. At noon. There were two drunks in our wedding party and they weren’t invited by either of us.

Unbelievably, that relationship didn’t last. Well, it lasted 5 years, which is 4 years and 364 days longer than it should have.

And I’m very happy. Not to mention, still alive.