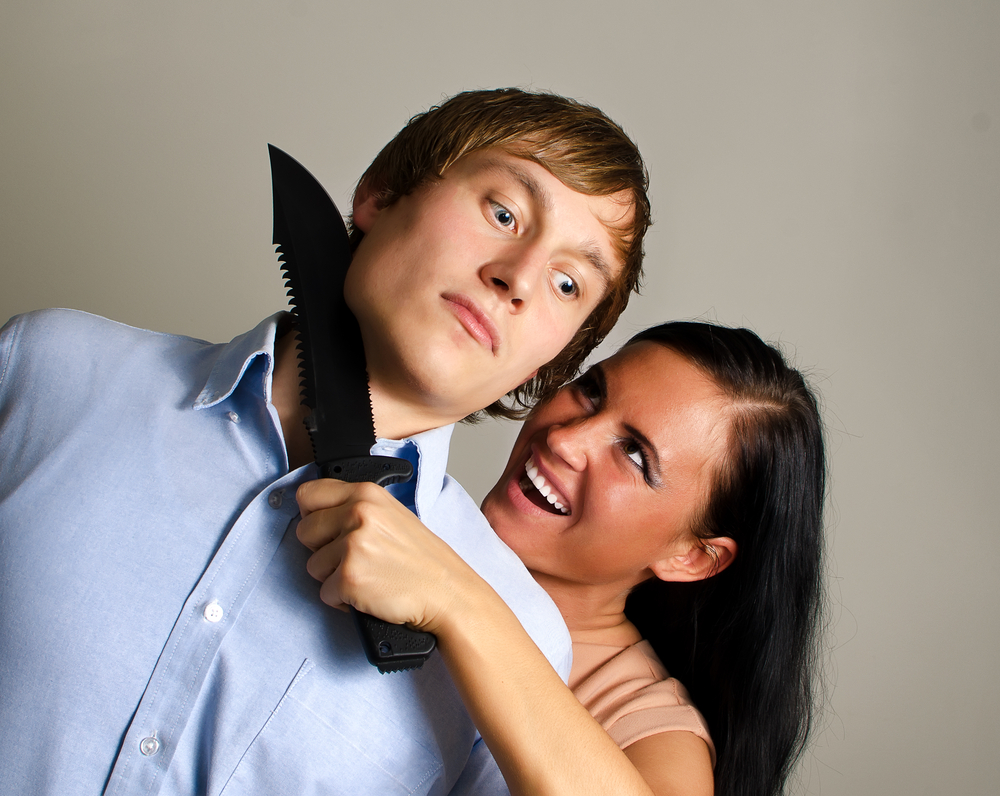 I Didn’t Kill My Boyfriend Today

Earlier today, when I looked over at his side of the bed, the cotton gun was pointed right at his head. I laughed at the way the pillow was perfectly askew so it looked like one wrong move could be the end of my boyfriend of over four years.

There he was, lying on his back, mouth gaping open, sucking in the dust and dog hair that plagues our room. I was staring at him with venomous intention.

Why? It was noon. Another day in which I had already fed the dogs, dried the dishes, finished the laundry he started, checked my emails, graded papers for my online class and had an hour workout. It has been a slow day during this “off” time as a teacher.

I quickly texted my friend and asked her if it was normal that I consider grabbing the cast iron skillet from the kitchen some mornings to bludgeon him with it. I sent a follow up “lol” just in case she thought I was insane. She responded, “I hope it’s normal because I think about killing mine every day.”

My boyfriend is a musician. He usually plays 3-4 gigs a week for his total income. When school is not in session in our college town, it’s often less than that because students aren’t here. Those times are a slow, merciless period in which I have time to think. Thinking, well, it rarely means anything positive for the old ball and chain.

See, I have this mountain of debt. Wait, what’s bigger than a mountain? World? Universe? See, I have this galactical multi-verse of debt. Between student loans and years of bad credit decisions, I’m suffocating under the tarp of a closed off pool in the summertime.

Because of this, I teach my regular four classes at my main bae job and then frantically send emails to other schools in my area that may have an extra side piece class I can teach. During the height of the semester, I get up before daylight, workout, shower and go. I don’t return until dinner. When I get home, my boyfriend has made said dinner and usually reports some type of housework that he’s completed.

“Here’s your grilled chicken, hun, and oh, I folded your very large underwear and placed them in a neat pile on the kitchen table for you to stick in a drawer.”

But then there’s off time.

Were it not for me, I don’t know what his natural wake up time would be. Seriously. Would it be 3pm? No, I think it would be more like 5 or 6. Yes, he’d wake up at 7, eat Taco Bell and then go drink. Perhaps it’s jealousy. Perhaps it’s the fact that most days, I have shortness of breath two to three times a day thinking about my financial situation.

I repeatedly tell myself that it’s not his fault I’m in so much debt.

But then again, he’s asleep. Like, in the afternoon. So, I want to kill him.

I want to kill him because he gets sleep that doesn’t involve dreams about being trapped in a beach house while a tsunami approaches or tornadoes dropping all around the plane he’s flying in. I want to kill him because he pays his half of the bills then puffs his chest like, “I paid the rent then bought you Mexican food. What do you want from me?”

I want to kill him because I want a house and a little backyard wedding celebration and maybe an infant that I will later write a think piece about because I probably really don’t want a baby, but other women do so it feels weird not to.

I want to kill him because with each passing day, the list of men that I trust is dwindling.

I want to kill him because his brain doesn’t shout things at him like, “You aren’t good enough! You’re not pretty and skinny enough to matter! Your boyfriend doesn’t love you! So, kill him, girl!”

I want to kill him because he’s so sweet. He’s so sticky, sugary sweet. He is caramel stuck in my teeth. He is the reason I get eye rolls if I vent about my relationship.

I didn’t kill my boyfriend today. I won’t kill him.

I don’t kill him because I would be terrible at jail.

I don’t kill him because there’s our pups, a lab mix and a half-pitbulll half-basset-hound wedged between us in the bed that is surrounded by his comic book trinkets.

I don’t kill him because he’s never uttered the phrase #notallmen to me.

I don’t kill him because he laughs with his whole face scrunched in while it turns red and crow’s feet dance wildly around his eyes.

I don’t kill him because his father, who passed away from ALS before I ever met him, beams so abundantly through my boyfriend that I actually feel like I can see his dad, and talk to him.

I don’t kill him because he talks to his best friends on the phone nearly every day just to catch up.

I don’t kill him because he doesn’t kill me.

I want to know how I can stop saying, “I love him so much but…” because he is a cosmic unicorn in this sometimes godawful galactical multi-verse.

Nothing that I’ve said in this piece will surprise him. I am a bounty of dramatic outbursts and anxiety attacks. I talk about myself incessantly and truly, I am borderline impossible to make happy.

The truth is, I wouldn’t know what to do if my drowsy prince wasn’t there at noon, slumbering beneath our faux wrought iron piece of art we got from Ross that now has clumps of dust hanging from each curve the way Tom Cruise hangs from the ledge of a helicopter.

Who would I scowl at in the middle of the day? Scowling should be a skill that I emblazon on my resume.

Who would I admonish the second his eyes open late in the afternoon?

Who would I text at night to tell him that I need him to fix us, and make sure to let him know the urgency? Because everyone knows you can turn your laid-back boyfriend into a type-A maniac like yourself while he’s playing drums at his favorite bar.

If tomorrow he turned into the ambitious, money making, cash saving, build-a-boyfriend dream I’ve always wanted, I’d probably be like, “Where the hell is my dinner?”