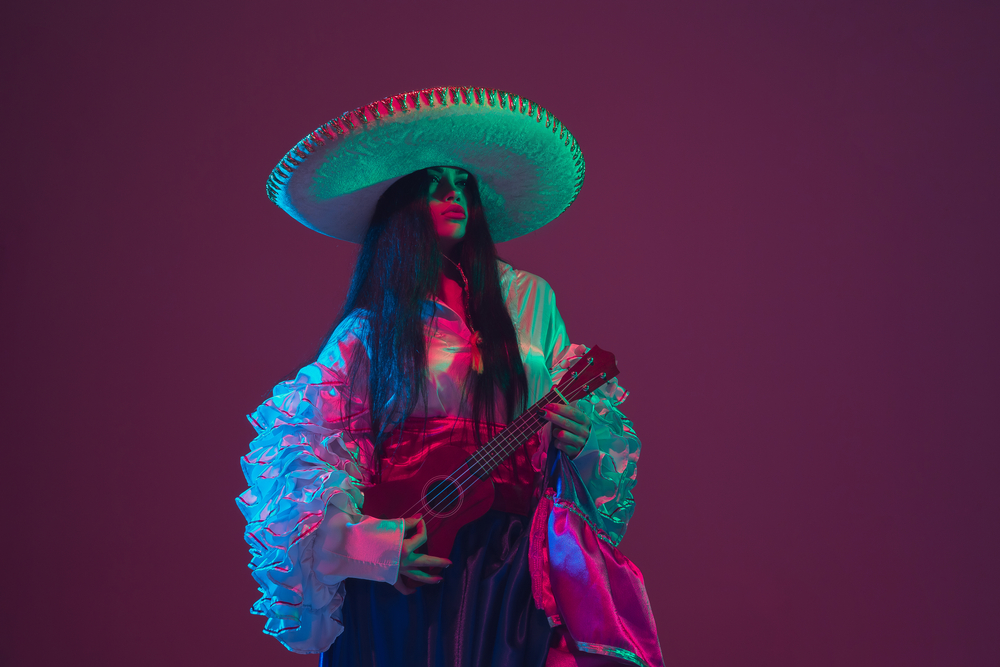 written by Lara Ricote May 5, 2020
FacebookTwitterPinterestEmail

Cinco de Mayo and I had had our ups and downs

When I first heard about it being celebrated in the U.S., I thought “GREAT. A pretend and over-Americanized way of celebrating cherry-picked parts of my culture.” Then I thought, “Heeeeey, you know what? Maybe it’s cool that they’re celebrating Mexican culture even if it’s not on our actual independence day, that’s September 16,” and please bathe in tequila that day. So whaaaaat? We are neighbors! One could say they’re trying! and that’s something, isn’t it?

And then I told myself to settle down since I’m just as Mexican-American as saying “Who wants some ghu-ack-a-mol?” as you peel off the plastic lid on your guacamole, and dip your Dorito chip in it.

Just like most Americanized tubs of guacamole, I’m a mix

I, as much as I refuse to admit it, was born in the U.S. I’m a first generation American, born in Miami, Florida. Birthed in a nightclub to the tune of a sweet reggaeton lullaby. And although I only lived in Mexico for bits and pieces of my life, I feel more Mexican than anything else, though, of course, I am American. But not just American: Mexican-American.

In the U.S, we’re called Chicanos. I live in the Netherlands now, and here I’m often called exotic—a term and feeling to dissect in another article (‘cause what’s that about?). If I’m asked—which I’m never not—I like to call myself ~confundida~ as shit. Unfortunately for me, I’ve learned these identity issues don’t pair so well with indignation towards cultural appropriation. Does that mean there isn’t something to feel indignation towards? Let’s talk about it.

Save the tiny fake mustaches for your Mad Men Halloween costumes

Alongside so many other U.S. cities, the plural little Latin American melting pot that is Miami celebrated “Cinco de Drinko” so hard. I was privy to parties where many wore Halloween store-bought green and red ponchos (in homage to our Christmas-colored flag) and over-sized sombreros (okay, maybe just regular sized—they’re normally huge) as they drank tequila to get their dry, hard-shell, cardboard-tasting taquitos down. And if I’m honest, it just kind of made me want to die.

Buuuuuut, celebrating Cinco de Mayo wasn’t, and isn’t, all bad. But, what are we celebrating? Is el cinco a day to wear sombreros? WHO. DID. THIS?

Corporations made it popular (surprise!) but if you look closely, particularly at the 1960s in the U.S., you’ll see that “Cinco de Mayo” was reclaimed by the Chicano Movement. That’s important. This movement was pretty bad-ass and I didn’t know enough about it—and now we both will.

In short: the Chicano Movement was a civil rights movement against the discrimination, educational segregation and ethnic stereotyping of Mexican Americans (but don’t you dare feel bad if you didn’t know about them, there were a lot of fights for rights in the ‘60s—this was one of them). They fought for equality and were led by many young students, by farmers, by mothers. This is a fight which many Latinxs continue to fight today. Chicanos sang songs of resistance, held marches and school walkouts, and had lengthy hunger strikes for their rights.

Not-so-fun-fun-fact: In 1968, Chicano protester Cesar Chavez went 25 days without tortillas, frijoles, queso, chile, pozole, or tacos. Actually, he went 25 days without any food, for the rights of farmers. I can and will attest those are definitely the foods he missed most. Nonetheless, I don’t think he would’ve denied a Taco Bell CrunchWrap Supreme on day 26. Even if that’s not technically food.

Cesar’s strike was acknowledged and farmworkers were recognized as a union (HELL SÍ, CESAR!) This was just one among many wins the Chicano movement saw in their attempt to have their people and culture recognized and accepted as just another community belonging to the multiculturality of the United States. Despite their accomplishments, the fight continues. Google it!

What does this have to do with Cinco de Drinko you might ask?

Chicanos reclaimed this date and made it a day of celebration of the Chicano culture because it was the day of a battle that showed Mexican strength. And now we drink to it.

I say, let’s celebrate! But let’s remember as we do. What we’re remembering happened in Puebla, Mexico. 1862. Shit year, as was any year with 18 in the front. The battle of Cinco de Mayo was France (the oldest and largest empire in the world) v. Mexico (just cute Mexico).

Mexico was young and recently independent and had few arms (as in guns, not limbs). France was mature and strong and had all the arms and soldiers with arms (as in limbs). And Mexico beat them. WHAT? It’s an underdog story, and it’s awe-some.

Does it matter that one year later the French man came back and took the milk? Not to us.

We’re celebrating that battle, we’re not about to contextualize it with actual historical facts. At least not on this holiday.  Let’s just take the opportunity and forget our malapropos condemnation of Cinco de Mayo and drink to the mini Mexican man and his year with milk.