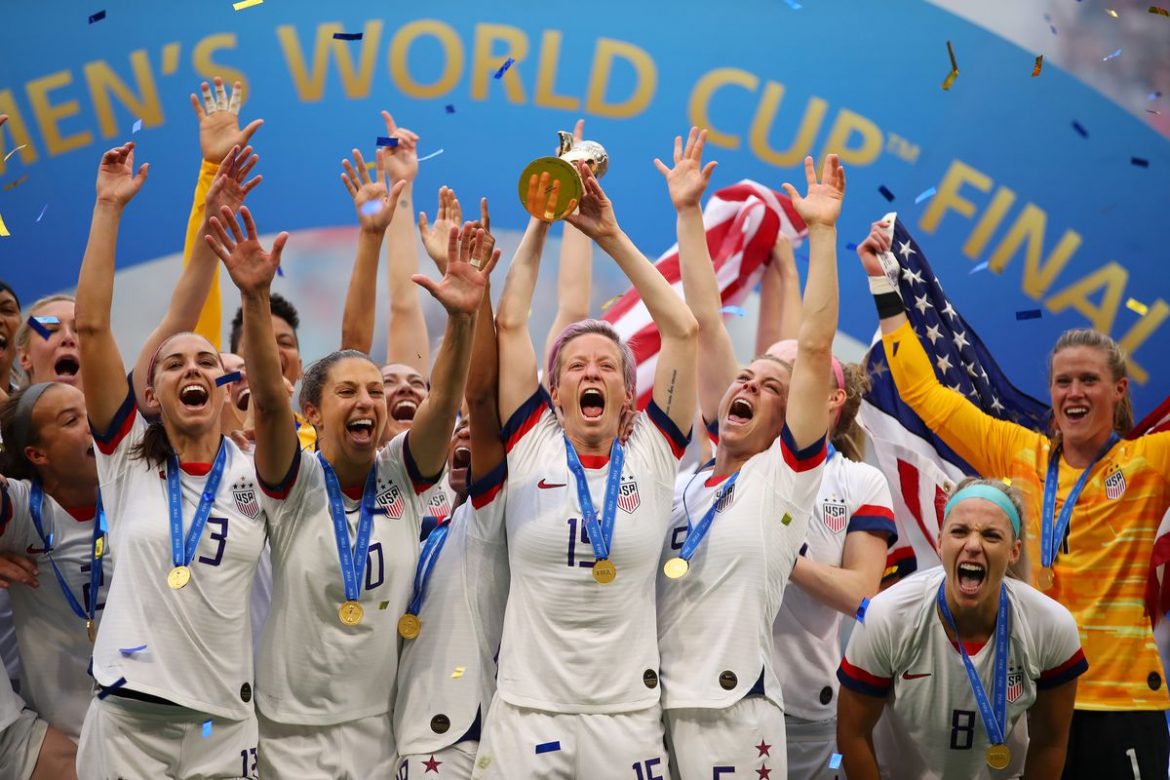 A Thank You Note to the Women’s National Soccer Team

Congratulations on winning the 2019 Women’s World Cup! What a spectacular win. What a tournament! You gave the world a show and we’re all incredibly proud of you and what you’ve accomplished. You certainly deserve the ticker tape parade in New York City. Today is your day to celebrate this incredible feat. However you want. ALL DAY LONG.

I’d like to share with you for just a second what the Women’s World Cup (WWC) win means to us, your fans. I hope you don’t mind.

I’ll start with myself. Picture a cherub-faced girl lacing up cleats for the first time in kindergarten, ready to start her first coed recreational soccer game. Every fall, she’d gear up: for her club travel team, for her high school squad, college team, and eventually her wedding (okay, I’m joking about that last one, but it’s not like I didn’t think about it!).

For me, that’s almost 20 years of soccer, with thousands of games, sweaty sprints and push-ups. Those see-through white shorts, the stinky shin guards, jerseys drying on hangers, and friendships formed on the field. There were camps. And tournaments. And end of season banquets. All for the love of the game, ‘cuz as you know we don’t go to those banquets for the food.

For multitudes of women, this is the sport that showed us that strength and toughness are assets, and that with a certain gritty grace you can handle much of what life throws your way.

I’ve been in a near constant state of euphoria since the World Cup began. Watching soccer every other day? Yes, please. I’ve watched the World Cup at home in the middle of the day. I’ve pretended to work at the office when I was really following your games on my cell phone. I’ve watched in a bar, in the car, in a box, with a fox… (Well, had that opportunity arisen, I definitely would have been up for it.) I’ve watched on a completely different coast of this country. It’s been simultaneously fun and stressful (um, Spain?). But it’s brought us together just a wee bit more. The freedom and independence we celebrated this Fourth of July has been a perfect backdrop, symbolic of your win.

Watching Brandi Chastain rip her shirt off in ‘99 was the most thrilling, daring women’s sports spectacle I’ve ever seen. But you all? You turned that up to 11 out of 10. Penalty kicks and one vs ones and rocket shots and slight concussions. Ninety degree heat. The beast that is Megan Rapinoe. The core that is our defense. The subs who tore off the bench and scored because they could. And (my) tears after Rose Lavelle’s goal in the final because of what it all meant: proof that big dreams become even bigger realities. This win was everything. Because this was about the game – but so much more.

On and off the field, you were shamed by critics who slammed your celebrations after the win against Thailand. In the press, it was “Celebrate! But not too much!” (Wouldn’t want to one-up NFL players with their dancing, twerking, ball spiking touchdown celebrations in the end zone, right? ) “Win, but not by that much.” “Play tough, but be nice.” So much scrutiny, it was enough for lesser women to throw your hands up in the air and scream. But you never did.

You kept your composure and did the job. The one that pays you 1/3 of what the men’s national team gets paid.

And to top it off, due to “Clerical error,” you had to share your WWC final day with the men’s Gold Cup final. It was, as Rapinoe said, “disappointing and ridiculous” – like many of the shenanigans surrounding your fight for equal pay (chanted LOUD and CLEAR in the stands), a battle of a different kind off the field. Hopefully, people begin to see that the pay structure is flawed and that the whole damn system needs to be overhauled.

And still, you managed the on-field battles with a type of joyful focus. You were real. And fun. And honest. When you hoisted that World Cup trophy in the air, there was jubilation: for the win and for carrying the crushing weight of athletic double standards.

I imagined that you were gracefully lifting the coveted prize straight into a newly shattered glass ceiling. I’m sure that was heavy. For that, we thank you.

When I think of this group of fierce warriors that represent this country, I get goosebumps. More importantly, I get excited. For what’s to come: for the sport, for women, and for (hopefully), equal pay. From the newest soccer player to the oldest veteran, we all took away something different from this win.

So, go ahead and dance in the streets of NYC. Party on the bus. Sip your tea. Strike your pose. Drink champagne on an airplane. Celebrate any way you goddamn please. You deserve it. You’re done with your detractors (for now), and so am I. Good riddance!

Congratulations on your incredible win. Your triumphs on and off the field, your formidable talent – it means everything. Tremendous things. For ALL of us.

Thanks for showing us the true, new definition of a “good sport.” You are champions, in every sense of the word.