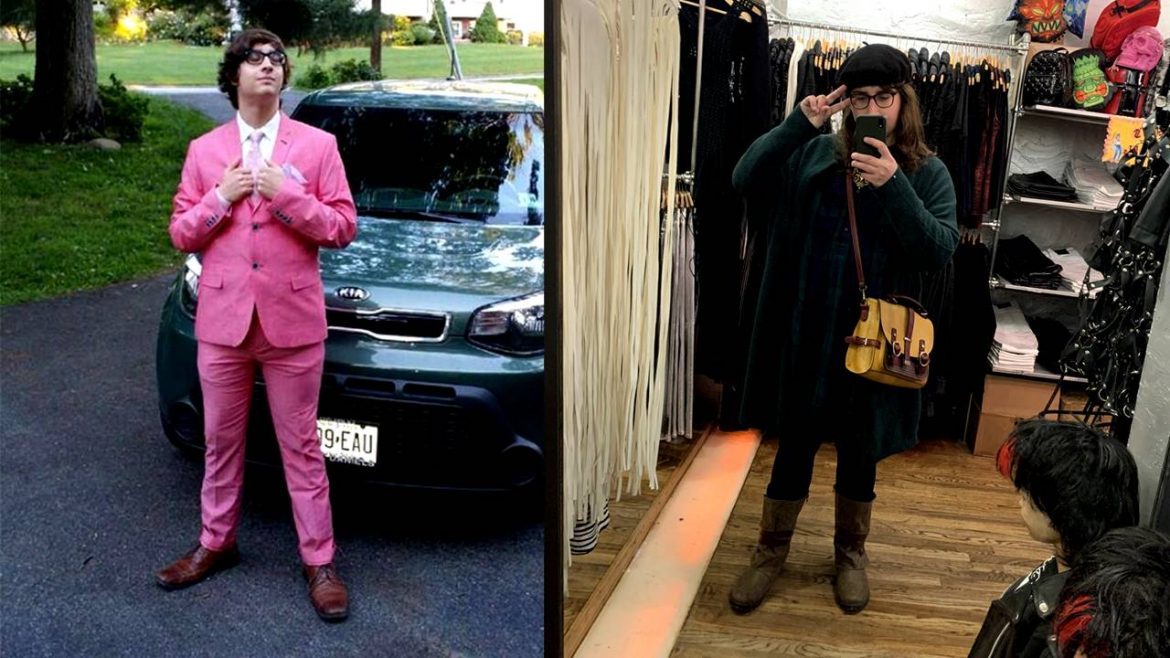 Am I Trans? These Four Quizzes Say Yes

“Who, me? Trans?” I ask myself, as I click on the fourth Are You Transgender? online quiz of the afternoon. Other high school seniors are writing college essays or getting ready for their AP exam. Meanwhile, I’m knee-deep in “gender research” every day. Posting on forums, filling out quizzes, reading articles- all the while telling myself there’s no chance I’m trans.

“Sure, the last three quizzes told me I was a closeted trans woman, but maybe this fourth one will tell me the truth – that I’m a dude through and through. I like football and video games! How could a normal guy like me actually be a girl?” I thought. “This is like when you Google the symptoms of the common cold and the internet thinks you have a terminal illness. That’s why I need to devote all my free time and energy to thinking about whether or not I’m trans. Because I’m definitely not!”

Needless to say, I was trapped in a fathomless abyss of denial without a rope or… whatever else you take into an abyss with you. Climbing gear? Trail mix? Anyway,  I refused to grapple with what I knew deep down to be true – that I am a trans woman.

So how did I eventually escape from that chasm of denial? How did I get to where I am today? First, we need to rewind a bit, to one year earlier. I had just come to terms with my bisexuality after years of struggling with self-actualization. Coming to the realization that I was bi was really difficult for me, because I had the idea in my head that bisexual people are all attractive, laid-back partygoers. I, on the other hand, was an anxiety-rattled dork more interested in Sonic the Hedgehog than dating or parties. How could I be bisexual?

Finally coming to terms with my sexuality brought forth a lot of emotions: pride, fear, hope… but above all else, it gave me a sense of relief. “Finally,” I thought. “I’ve got myself all figured out. I know who I am. No more surprises from here on out.”

Quickly afterward, though, I started to experience what I now recognize as gender dysphoria. If you’re not aware, gender dysphoria is the feeling that your body doesn’t match with your gender. As a woman, I felt a deep discomfort with my testosterone-filled body. My facial hair, wide shoulders, big feet – they all suddenly started to bother me, and I had no idea why.

I grew up as a fat kid, so hating my body wasn’t new to me. In fact, one of the reasons it took me so long to realize I was experiencing dysphoria was because I’d grown accustomed to feeling uncomfortable in my own body.  The biggest hurdle early on was trying to differentiate between the pain of gender dysphoria and the pain of my pre-existing body image issues. 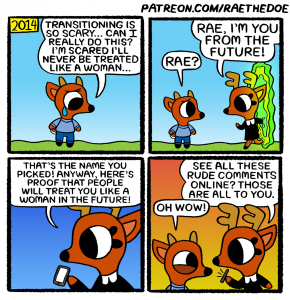 Eventually, dysphoria became less and less subtle. I started to notice I was no longer jealous of conventionally handsome men. I didn’t want big muscles or a beard. I wanted to be thin and delicate.

“Do I… want to be a twink?” I wondered. “Yeah, definitely. That’s it.” One questionable diet later and I was so thin  you could see my ribs. “Success!” I thought. “Now that I’m skinny I’ll never feel bad about my body again.”

Unfortunately, I learned that losing weight isn’t a magical cure for low self-worth, and on top of that, my dysphoria worsened. I started to feel weirdly jealous of women, and I wasn’t sure why. Plot twist: I wasn’t a twink.

“Why do women get to wear such nice clothes, while men have to wear shirts and pants?” I would ask. “I wish I could wear a dress. You know, just because it’s an interesting piece of clothing.”

Around this time, I started taking those aforementioned quizzes and spent nearly every afternoon reading about what it’s like to be trans. This is when I fell into the abyss. I refused to believe I was trans, even though the possibility danced around my mind from sunrise to sunset every day.

One day, completely unprompted, I broke out of the abyss. I can’t tell you why, but while using the men’s room in school, a thought popped into my head, fully-formed, as if it was an escape rope appearing out of nowhere to rescue me from this dark cavern of denial.

“Men’s room? Men’s… room? Men’s? That’s not me. I’m not a man.” That’s all it took for me to accept myself for who I am. I looked in the mirror as I washed my hands, staring in the face of a young woman who had no idea where to go from here.

“Okay, so I am trans. But how do I come out? Is someone like me even allowed to be a woman?” Questions raced through my mind. Years of self-loathing, body image issues, and depression all bubbled to the surface. “Can I really do this? Can I make it as a woman?”

I was so, so scared. I thought I was too tall, too wide, and even too old- even though I was so young- to transition. I told myself “if you can’t be a woman, you can at least be a feminine man.”

Unfortunately, I discovered that there’s no compromising with a cis-normative society.

I wore a pink suit to prom with a pink bow in my hair, which ended up being a controversial decision with one of my friends.

“Because that’s not something a boy does!” was the answer I got back.

“Well, I’m not a boy, so…” was what I wanted to reply, but I believed, at that moment, that living a feminine life just wasn’t possible for me. So I gave up. I retreated into the closet and tried to suppress how I felt.

Suppressing my queer identity was not new to me. I had tried to convince myself I wasn’t bisexual back in middle school and ended up puking at football practice when it suddenly occurred to me that I definitely wasn’t straight. I hoped my experience on the first go-around would help me achieve my dreams of never achieving my dreams.

Fortunately, my aspirations of living a repressed, unhappy life were dashed when I ended up meeting transgender friends in college who encouraged me to explore these feelings, rather than run away from them. After a few months of thinking about it, and talking with friends, I came up with a new name for myself – Olive.

I can’t understate the feeling of freedom and self-actualization that comes along with picking a new name. That feeling sticks with me every time I introduce myself as Olive Rae Brinker. I’ve abandoned who I was before, and I am now a self-realized woman making her own path in the world. I refuse to let my oppressors choose how I live my life. I refuse to live in hiding.

I refuse to be anyone other than who I am.

“I’m Olive.” Every time I say that phrase, I remind the world of who I am, and I remind myself of the strength that allowed me to get to where I am today. I look back on those years of denial and self-loathing with a smile, because I know those obstacles only made me stronger. To every trans person out there, wherever you might be in your journey, I wish you strength and resolve as you continue along your path. The future might be intimidating, but it’s ours.

The Syndrome is about sharing stories to empower women through comedy. If you, like us, believe in gender equality, and want to support our non-profit, please consider donating!