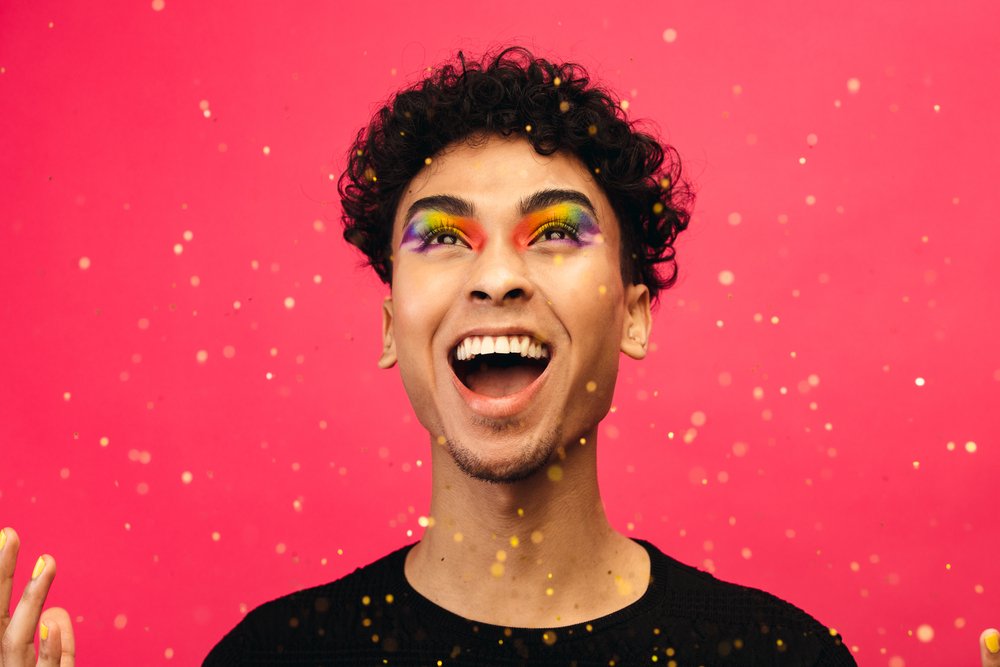 Pass the Rainbow Skittles: Pride In My Own Words

As we welcome Pride Month – kicking ass and gaying rainbows since 1970 – I sometimes think I’m a lousy Pride celebrant.

Topically I’m the ideal LGBTQ person: I’m romantically and intellectually lesbian and therefore gay. Physically, I’m attracted to both sexes, which is why when I saw “Wonder Woman” in the theaters, I didn’t buy a soda: there wasn’t one minute of that movie I was going to miss in the bathroom! Finally, I’m a transgender woman, and just young and privileged enough that retaking the word “queer” back from the homphobes doesn’t trigger me.

When people see my rainbow tattoos and ask me how I identify on the LGBTQ spectrum, I proudly say, “All of them.” (Unless I’m in places where I think this might confuse them. Then I scream, “ALL OF THEM!”) I am unequivocally, unabashedly, maximum volume-ly LGBTQ.

And yet, as Pride Month rolls around each year, I don’t feel any different.

I don’t wake each morning happy that it’s June. I don’t count the number of sleeps until a certain day – especially at 52 years old, where sleep starts meaning something different than it did at 25. It is by my soul’s basic rhythms another month, differentiated only by the fact that it’s my birthday month. (Another reason at 52 I don’t exactly enjoy counting them up.)

This is not to say I don’t enjoy things like Pride festivals. I have a place for them in my heart and my pocketbook. They’re good places to see old friends – and there’s enough food in my bags of swag when I leave one to keep me out of Safeway until the end of July.

Even as soon as the next day, though, as I open my bag of rainbow Skittles, down them with a “Love Wins” kombucha, and then brush my “Smile with Pride” by Colgate, I find my thoughts anywhere but Pride. (Starting with: What the hell is the difference between rainbow-colored Skittles and normally colored Skittles? They all vaguely look like Jackson Pollock threw up in a bag.) When did I become such a dud?

I used to be really proud and performative during Pride Month.

In June, as the Pride festivals popped up along the I-5 corridor from Portland to Seattle, you’d find me in my brightest dress, singing my loudest songs. If there was a photo to be taken, I was in it. If there was a thought to offer, I’d share it. That was before I was out, though. Before I was me.

Back then, the only time I got to be LGBTQ was when I could hide it among everyone else. “Allyship,” I called it. Carrying pink mugs, buying beer with unicorns on it, all those things from June 1 to done. A reason to be where my soul knew I needed to be, even if my mind and body didn’t feel there just yet. Lost, Pride Month was my time to wander through the possibilities and the world of “what if?” even if I didn’t know the questions yet.

I know the answers now, lots of them. My life and my existence are about studying them, understanding them, and when I’m at my very best, adding to them. I’m a transgender woman, activist, and even a peer-reviewed scholar. Do I still wrestle with certain questions? I do. But in terms of Pride Month, it’s usually pretty basic:

“Seriously. These Skittles are the same damn color as the regular bag. I paid more for this?”

And that’s what makes me feel like I’m a lousy Pride celebrant. I don’t seem to need Pride any more. I don’t need Pride to feel like I fit; I get that every day. I’m just one more Skittle in the bag.

I’ve got a group of friends that I meet with every Monday night for chicken Caesar salad. We call it CaesaRanch Mondays because when we started, one of us thought Caesar dressing and Ranch dressing were the same thing. (So sue me; they’re both creamy white with little black things in them.)

On weekends, we play Cards Against Humanity, where everyone’s identity is fair game. We drink many things, and when that happens, everything is an unfair game. None of my friends are trans, but one’s a lesbian, and like my trans status, it’s just one more thing.

In my job, I’m the executive director of a disaster-relief nonprofit in coastal Oregon, which involves wandering all over a mountainside helping survivors of a forest fire. I’m reasonably sure, based on voter data, that most of them voted for Donald Trump in both elections. They’re stereotypically the last people I should feel safe around – and yet I do. We joke about who we are – and who we aren’t – just like we do my rainbow hiking boots. (Now there’s something worth paying more for.) Each and every day I look around, and I’m surrounded by all these people who get it – who get me. I’m a normal person in a normal space.

From that standpoint, my whole life is Pride Month, I suppose. I never take this fact for granted. I am aware that it represents privilege at the highest level.

I am aware that I live in Eugene, Oregon, a place where Birkenstocks are worn to funerals. At work, in the midst of a blackened forest of memories, I am the person even the most conservative people look to for a way out. My trans-ness never becomes an issue for anyone because they know I’m there to help. That kind of offering pushes aside a lot of ignorance.

I don’t need Pride. And yet I still do. I don’t long for it; I don’t mark it on the calendar. But much of the rest of my world still does and it’s for my life in the world beyond my own that I need it. Certainly, I as long as I’ve understood my transgender identity, I’ve known that I’ll always stand out, and that’s OK. Red haired kids stand out in class, but you don’t see people yelling “Sweet Jesus, it’s a ginger!” every time they see one. They’re part of the tapestry of the school, just as I’m a part of the tapestry of my everyday world.

My world, though, is a tiny and rare one. LGBTQ people, particularly transgender ones, are not part of most Americans’ daily tapestry – at least not that they’re aware of. Our lives, our loves, even our labels, remain different, if not fundamentally foreign to most people.

Just look: a toy company announces its brand name will be gender neutral and half the country nearly craps a potato. Never mind that they don’t even know what “gender neutral” means; they just know the term doesn’t apply to them – so it must be bad.

Maybe if they’d simply changed their name in June it would have helped? Seriously.

For many Americans, the only time they encounter the tapestry of the LGBTQ community is during Pride Month. Not because they chose to partake, but because for 30 non-straight days it is draped over and about them. Our vocabulary, our experiences, our lives are everywhere they look – and even if I don’t need it every day, my peers and my country do.

How to Summon the Perfect Lesbian Relationship from...

When I’m Angry, Is the Write Stuff the...

Am I Trans? These Four Quizzes Say Yes