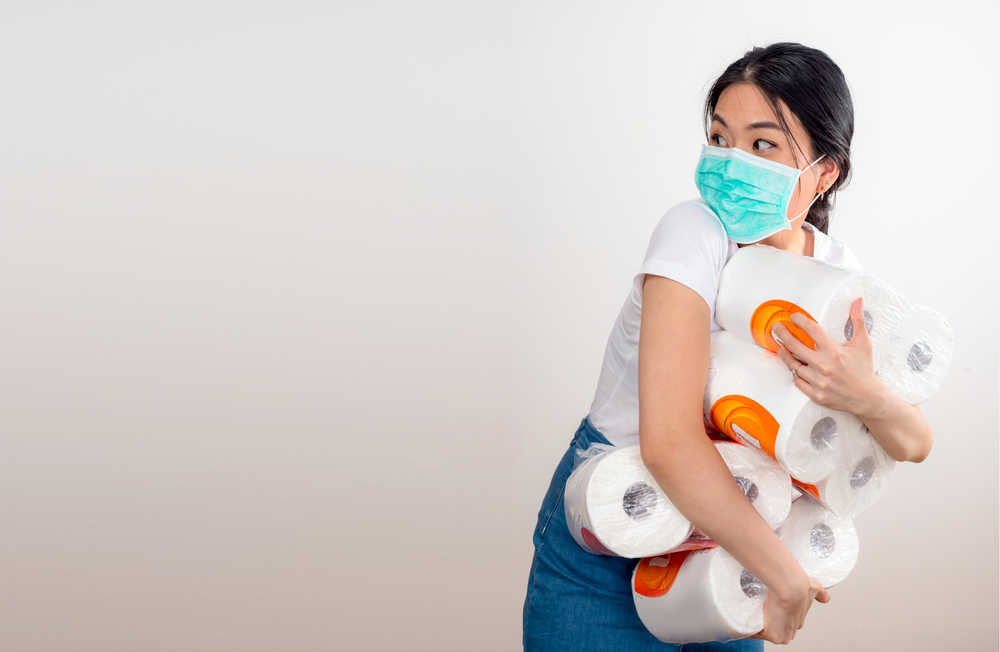 As a former dude, it is not lost on me the privilege I used to have. I got paid more for doing the same amount of work as a woman. When I spoke in meetings other people shut up because I had an obnoxious, booming baritone that over-rode everyone else. I could pee behind trees when I was camping without a care in the world. Even if I got caught, I could just shake it off and head back to making S’mores.

Four years later, if I’m being honest, not all of this has changed. Now unemployed in the wake of COVID-19, I am still making the same money as all the unemployed women I know. In meetings, I might even be more domineering. As I never changed my voice, and with everyone now being at least six feet socially distant, my volume is a needed asset.

Peeing behind trees, however? That has been a dismal failure.

And while I don’t feel a need to go into specifics, let’s just say there’s a pair of sneakers I decided to leave in the woods. Most assuredly, I can say this is definitely an area where men will always and unfairly have it made. (Number 9,623,745, if you’re keeping a list.)

To say my toilet paper habits have changed greatly is an understatement. I used to be able to make a roll last for weeks. When I was a guy, assuming I was doing the bulk of my bathroom business at work or area coffee shops, I could make a roll last nearly a month. Now, I create enough empty toilet paper rolls that my daughter can make holiday poppers for every occasion — Christian, Muslim and Hallmark.

So it was that I arose at 6 a.m. last Sunday to prepare for my journey to my local Costco. Driving by it every day on my way home from the unemployment office, I know people start lining up there at 6:45 a.m. and I wanted to get my place in line.

Costco, if you have not been by one, currently looks like a fortress. With walls of carts cable-locked together now blocking the entrance, people are channeled into proper lanes that leave no chance for a rush on the doors.

It’s like lining up for Space Mountain but with fewer special effects and warnings to pregnant women.

I was the third one there, and very quickly one of the veterans of past Costco Crusades let me know that we should line up with our carts already between us. Better for social distancing, as well as leaving you fully prepared to run over anyone who tries to cut in line.

Sitting there on the cold concrete with my blanket and my reading materials, I was fully prepared for whatever came next – except for what came next.

I responded well to this. No, really. For just last week when I was at Costco, I did not respond well to something. In fact, I was a complete raging bitch to someone who had the actual audacity to do her job. I felt bad enough then to go back and apologize, and as mad as I was now about the lack of toilet paper, it was not this employee’s fault. Also, my ass was freezing.

Trudging back to the car, I decided that since I was up and interacting with asymptomatic people who might in five-to-14 days bring about my death, I should head for Safeway. Running out of kitty treats and now living with my cats full time, I am keenly aware at any time they are capable of nibbling off my toes when I’m asleep.

Once in Safeway, I found myself going where I always did lately: the cavernous space once known as the “paper goods aisle.” I never find any toilet paper there, but I enjoy hearing my echo bounce off the shelves.

What I saw this time, however, stopped me and my vagina in our tracks: Charmin.

A whole 12-pack of it. Extra-strong, even. Gold, Xanadu, and Shangri-La, all wrapped up in plastic covered with bears that for some reason need clean underwear but are nevertheless always naked.

There it was: a lonely, soft, pillowy brick of hugeness, right there, between where paper towels and other non-flushable paper products still lie. (Cocktail napkins, dinner napkins, fancy napkins….) The Charmin’s size now more prominent and bold against the tableau of emptiness.

Looking about the aisle, I made sure I was alone. As predatory as I was becoming about my toilet paper needs, I recalled my descent into moral depravity earlier at Costco. I knew I was perfectly capable of steamrolling an elderly person or a yodeling child to serve my needs.

But the aisle was empty, and after making my purchase I made my way out of the store. Already other people were coming in, each of them side-eyeing me with that look that says, “We know where you live and how much TP you now own.”

Arriving at my car in the light of the new day, I thrust my purchase towards the rising sun and chanted the opening lines to “The Lion King.” Really.

People don’t hassle you when they think you’ve lost your mind.

Driving home, I rejoiced in my conquest, thrilled that I achieved what others had not. I had beaten the hoarders, I had defied the Fortress at Costco. I was the victorious woman. I was the Amazon Prime-less Warrior who had come home with the prize. I was… I was in serious trouble.

I forgot the kitty treats.