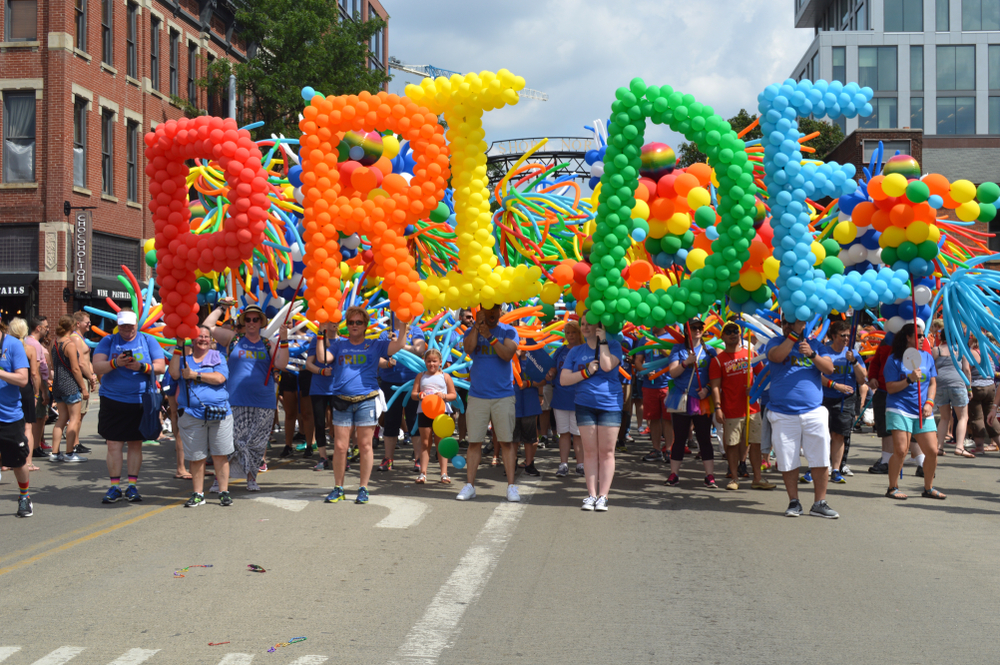 The clock is ticking down. The month will soon be over and corporate America can put away their brightly-hued products created to trumpet their support of LGBTQ Pride month for another year – I am surprised someone hasn’t pitched a rainbow-colored trumpet… yet.

As the month winds down, you might imagine, I am a little worried. After all, after 11 months in storage, that rainbow-wrapped KIND Pride bar is going to be hard as a rock. If I wanted that, I’d just buy a Nature Valley granola bar.

Truth be told, I’m actually not that cynical about Pride-themed products.

Yes, I find it somewhat pandering that Colgate runs a magazine ad labeled “Smile with Pride,” featuring a toothbrush stacked three inches and six layers high with red, orange, yellow, green, blue, and purple layers of toothpaste. Is it toothpaste or Lucky Charms?

And Starbucks $16.95 rainbow-hued reusable cup does strike me as just one more way of separating me from my money. With a drink line-up featuring pink, green, blue, purple, and orange drinks that look yellow, I’ve never had any doubt Starbucks might be the gayest company on the planet. Let’s face it, Starbucks looks like someone dropped a rainbow in the frappuccino blender every month.

What’s also true, however, is that behind Starbucks’ very publicly colorful face is a company whose policies make it among the best places on the planet for LGBTQ people to work. A long-time member of  HRC’s Best Places for LGBTQ employment, they put their money where their mouths are – just like Colgate-Palmolive, another company on the list. (Remarkable, considering their mouth is clearly full of six-times the recommended amount of toothpaste.)

Indeed, more than 500 companies across the country are on this list showing which companies have corporate policies and practices supportive of lesbian, gay, bisexual, transgender and queer employees. That many of these companies want to advertise and market to that is just fine by me.

Not everyone responds favorably to Pride-themed products or the month in general. Christian News Network labeled Pride Month as “pro-homosexual,” in support of “same-sex ‘marriage.’” Note that both their use of double quote marks and dated terminology reassures their audience can stay firmly mired in 1972 when things weren’t quite so colorful as long as you stayed away from the hippies.

Ironically, both massive corporate support of, and the conservative backlash to, Pride Month has produced the same question: “Do we really need a Pride month?”

Let’s be honest: When even Arkansas-based Wal-Mart is at a Pride festival giving out coupons for free grocery delivery – yes, this includes 43 different types of condoms – isn’t the battle for equality over? It’s not – and honesty has everything to do with it.

For many people, Pride is the only time a year they can be their true selves.

Whether in a parade, at a festival, or dining in a supportive establishment, Pride Month and its events may be the only time they can show who they are to the world around them. (And no, Halloween doesn’t count; identity is not a costume.) That rainbow mug others mock, they carry openly and defiantly, because it might be the only way they can show who they truly are.

Yes, Wal-Mart as a company may be safe to work, but Arkansas, like much of America, is not. It’s perfectly okay to discriminate against LGBTQ people there – and many Arkansans are damn proud of it.

I say this because I’ve lived it. There was a time in my life when the only time I felt safe to put on a dress was at a Pride event. Even in Oregon, LGBTQ people live in fear of losing their jobs, their homes, and their parental rights. Is it illegal? It is, but tell that to the Oregon judge who refused to perform same-sex marriages because he thought they were icky.

Four years ago,  I attended my local event, Eugene Pride. Sitting under a tree on the fringes of the festival, holding my pink Starbucks mug, I’d quietly visited the HRC (Human Rights Campaign) booth, the GLSEN (Gay, Lesbian & Straight Education Network) booths, and taken every pamphlet the local transgender advocacy organization could provide. Still, I could speak the truth to no one.

It was on that day, however, that I began to speak the truth to myself. I said the word “transgender” out loud in regards to myself for the very first time.

I can’t say I was born under that tree. Mowgli and Tarzan have already co-opted that story. But I can say it was there that my self-concept of who I am now began to truly form. It’s where I felt safe – and if I needed it in Eugene, Oregon, where it’s not uncommon to spot a rainbow bumper sticker proclaiming “Love is love” or “So gay I can’t even drive,” you have to believe it’s still needed everywhere.

This year I’ll be back at Pride, this time working one of those corporate booths handing out rainbow schwag. I’ll proudly be me, and sincerely explain to anyone who will listen how much my company values them. (No, it’s not Wal-Mart; 43 brands of condoms and none are for women? Please.)

Where I’ll be looking, however, is over on the edge, underneath the trees. Looking for anyone who is quietly pondering, even as they live out loud for maybe the only time that year. Knowing that they need Pride – and hoping someday they won’t.