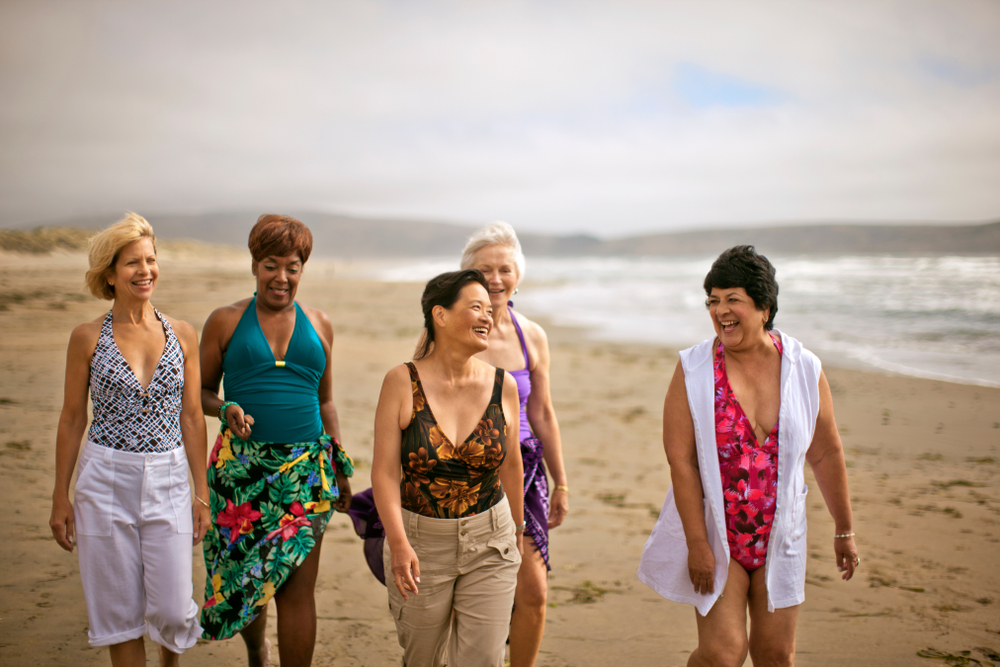 Don’t Beach About It to Me

A few years ago, four girlfriends and I rented a house on the Oregon coast with our five dogs. We didn’t throw drinks in each others’ faces, toss furniture across the room, or try to vote each other out of the cottage, which is why we’ll never make it on the show, Real Housewives of the Pacific Northwest.

What we did was laugh; play games; walk on the beach; complain about our mothers, boyfriends, husbands, ex-husbands, and hot flashes; watch movies; play games; and eat. And eat. And… well… eat.

In many parts of the country, serving meals for five women wouldn’t be a big deal, but things are different when those five women all hail from Eugene, Oregon, the picky eaters capital of the world. In our group we had one vegetarian, one vegan, one omnivore who loves anything that will sit still long enough for her to bite it, one woman on Weight Watchers, and one lactose/gluten/sugar-free/free-range/locally grown/is there anything leftian.

We had daily conversations such as this:

Woman 1:       Are they free range, organic, no-spray, locally grown grapes that were told they were beautiful from childhood and raised to the sounds of classical music? Or are they covered with toxic chemicals and picked by underpaid, overworked immigrant workers who are just trying to support their families? Because if they’re the latter, my karma won’t allow me to even be in the same room with them.

Woman 1:       No thanks. I’ll have some soy ice cream with hemp sprinkles instead.

(P.S. Woman 1 is me). During my earlier years in Texas, people like us were known as “finicky” eaters. We were frowned upon and pressured by friends and family to, “At least try some of the barbecued fish because fish is really more a vegetable than an animal.” Uh-huh. And beer is really just thinner milk with a kick. I remember once cooking up a pot of vegetarian chili – which had raisins and cashews in it – for a chili cook-off in Houston. People avoided my booth like I was a feminist liberal who protested rodeos (which I was, but I didn’t itemize those “sins” on the ingredient list for my chili.)

It used to be difficult to find recipes to meet the needs and wants of guests with dietary restrictions, but these days there are dozens of cooking shows on television catering to everyone from those who enjoy deep fat-frying everything – including their oven mitts – to those who consider a single glazed carrot with a dollop of wild ginger cardamom pear compote to be a complete meal. You can also Google recipes for any dish. I typed in the words “gluten-free” and got 55 million hits. Of course, probably 54 million of those are actually ads for gluten-free Viagra, but those first million are probably legit.

In addition to our dietary differences, spending several days and nights with this crew of women (who thought we knew each other well) proved that we still had many unknown idiosyncrasies and secrets. My friend M, for example, is the nerdy dude of our group, what with her love of games like Settlers of Catan and all things sci fi, along with her monosyllabic sentences. Well, that week we all discovered that she also is a huge fan of Jane Austen movies, which we found out when she basically held us all hostage and made us watch Pride and Prejudice, all 47-hours of it (or so it seemed). If I ever hear anyone say “Mr. Darcy” in any context, I will plead not guilty by reason of insanity.

Another friend, B, came all the way to the beach with us, but did not want to step foot near sand or surf. Mind you, it wasn’t because she had body issues and didn’t want to sport a swimsuit. This is Oregon, where even mid-summer, appropriate beachwear includes long-sleeve flannel shirts, a waterproof jacket, and optionally, sand goggles (because the blowing sand can exfoliate your eyeballs). B preferred to stay inside and post things to her Pinterest page. On the other hand, J and I probably took eight long walks on the beach in the three days we spent together, despite what the low-hanging fog and misty rain did to our hair. If there was any chance to get outside – especially if Pride and Prejudice was still droning on – we took it.

The funniest difference between all of us friends was our sleepwear and sleeping habits. J and G got all dolled up in nice pajamas, like they were going to appear in a photo spread about lingerie at the beach. “Okay, now drape yourself on the kitchen island and hold this anchor!” B and I just tossed on t-shirts, mine covered in dog hair. M apparently slept in the nude (except for her C-Pap machine), which now that I think about it, wasn’t that much of a surprise.

J and M turned in first, but that’s just because they wanted to smoke weed in their room (it’s legal here). G snacked until midnight, polishing off those non-organic grapes as well as a half-bottle of wine left over from dinner. B complained that the sound of the ocean waves was keeping her up, so she went out to her car and brought back one of those sounds of nature machines that had “ocean waves” as a setting. She retired to her room, set the machine to “white noise” and immediately began to snore.

I, being the only “normal” one in the bunch, made myself a bed on the sectional in the living room, so that I could snuggle with the five dogs and think about the bunch of weirdos I was lucky enough to call friends.

Booked on My Birthday