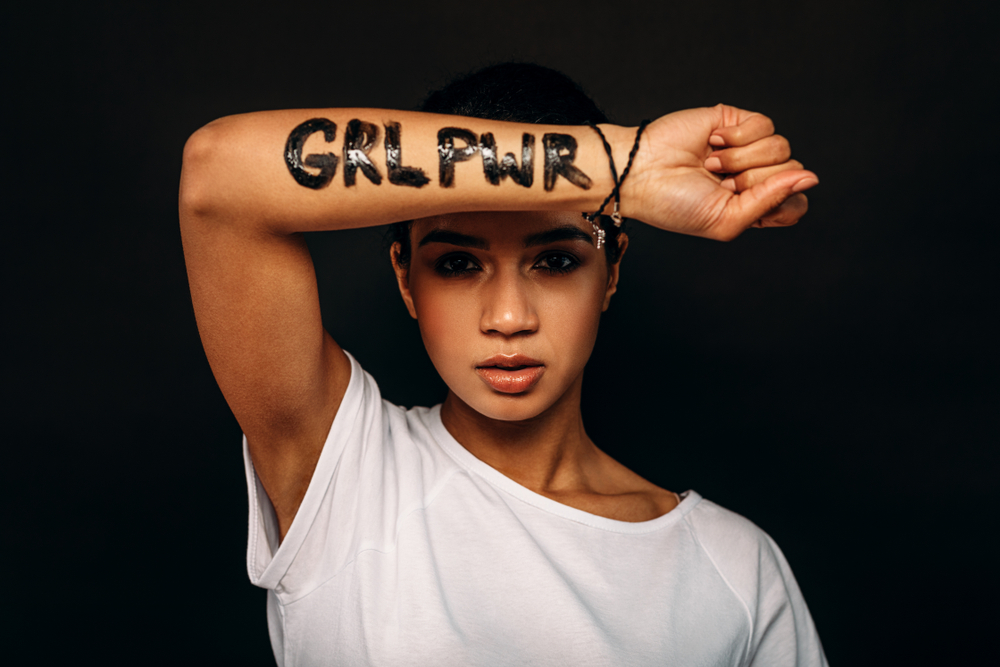 I have, unfortunately, met a lot of men. Because I am young (I’m 21, so that means I’m like, basically 12 to anyone over 30), a lot of men try to tell me things, and weirdly, a lot of the time it’s about my own experience. They see my youthful face and immediately assume that I don’t know anything about the world. Mostly, I take it on the chin and nod and listen because most of the time said men don’t deserve the compliment of rational argument.

Anyway. One day, I ended up sat on a sofa having a chat with a friend about the word “feminist” and its varied meanings. He said the word is, and I quote, “actually quite aggressive and not very helpful to the movement.” I’ve identified as a feminist since I was around 13, and finding feminism, like for so many other women, helped me not feel so alone in a world that is absurdly cruel to anyone who isn’t a straight, white cis-man. My eyes were opened. I suddenly had a name for all these things that I’d been discovering. I could look at an advert and its glossy sheen and know that it is just a gloss, that it’s trying to sell me something and should be taken with a pinch of salt. I had a name for why it made me uncomfortable when I saw Piers Morgan screaming at his female guests on GMB. I suddenly had a framework within which to unpack the things I thought were unfair, but before didn’t have the space with which to do so. Basically, it changed everything for me.

I’ve always been quite shocked at how brazenly dismissive some people are of a movement that, upon its success, would actually help them quite a lot. It’s absurd to me that a movement set up to emancipate the oppressed could possibly be perceived as a threat to anyone other than those in power. And even then, it’s not a threat to those specific people, just the power they hold – specifically the power they hold over others.

In my conversation with the man that thought/probably still thinks (spoiler alert) feminism is a bad word – let’s call him X – I got visibly upset and this only added to his zeal. I was infuriated that he could be so closed-minded. “There are some people who use that word who do things I disagree with,” X said. I understood where he was coming from. He explained that he’d met Christians who felt weird about calling themselves Christians because of churches like the Westboro Baptist church. I suggested that surely, cowering away from the label of Christian because of an aggressive minority is letting them win, no? He wasn’t convinced. “Listen X,” I ended up saying through an incredibly thin veil of politeness, “I don’t understand why you’re focusing on that and not all the other horrible things in the world that that word fights against.”

We continued the conversation for about an hour, whilst my frustration only got deeper. He wasn’t getting the point at all. There are many different ways to be a feminist, and many ways to express that. There are women who use the word feminist who say and do things that I actually think oppose the feminist movement. Take Germaine Greer for example. Her incessant tirades against the trans community are so upsetting and horrible, and I wish she would just get a hobby that isn’t damaging to the mental health of an entire community, but that doesn’t mean that I’m going to abandon feminism because of her. If anything, it means I get louder. More vigilant. No trans-exclusionary rhetoric will fly, as far as I’m concerned. I’ll catch it like one of those plants that eats flies.

The thing about labels is, they’re really helpful. They give a name for people to unite under, and funnily enough, for an oppressed/minority group, this can be a soothing balm. It’s like the X-Men – if they didn’t wear Lycra and have names like “Storm” or “Wolverine,” they’d be far less cool and DC wouldn’t sell half as many figurines. Even the Suffragettes got it – they had a colour scheme and everything. They had a uniform that made people feel like a team because it turns out we’re stronger together, after all. One thing that kind of annoys me about modern movements is that there isn’t really “a look,” if you know what I mean. Sure, there’s Greta Thunberg’s pigtail plaits, but what about people with short hair? We need a colour scheme! I think navy blue, or black. Something gothic. Alas, I digress.

Basically, my point is, there are as many ways to be a feminist as there are people who call themselves a feminist, and it would be nice to have conversations about the things feminism is actually concerned with, rather than the semantics of a word that is ubiquitous at this point. And if the word itself makes you uncomfortable, maybe that’s your problem. But since I am duty-bound to be super-duper nice to people like X, lest he tarnish the whole feminist community with a brush that should only be applied to an individual, I feel like I must offer a solution that isn’t “get the F over yourself and use the damn word.” So, here is how to say the words “I am a feminist” and mean it.

Step One: say “I.” You can stand on a chair if you like – Caitlin Moran says it helps. You know, it gets the blood flowing a bit.

Step Two: say “am” almost immediately after you’ve said “I.” You can strike a pose at this point, though if I were you, I’d wait for the big one.

Step Four: here we go! Say “feminist.” It’s pronounced phonetically, so surely there shouldn’t be much difficulty. If there is, though, you can type it into google and press the little speaker thing and a lovely voice will say it for you. But for maximum impact, it’s better to declare it yourself. While striking a power pose.

So, there you have it: how to say you’re a feminist in four incredibly simple steps. Even I, basically a twelve-year-old, find this incredibly simple. Don’t be an X. See the bigger picture. There’s strength in numbers, so it’s easier that way.