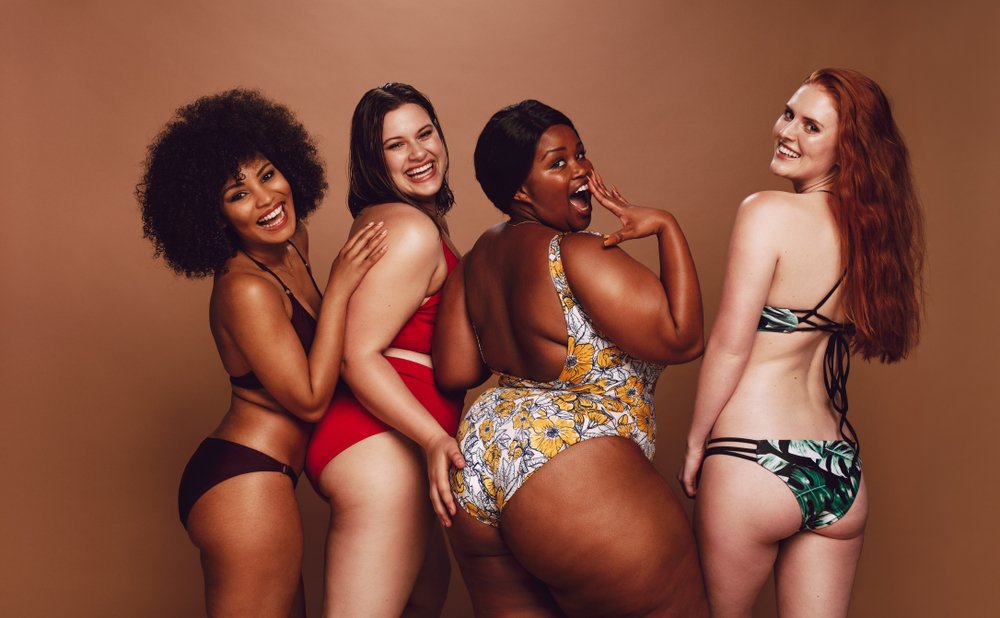 Because I’m an adorably super-eco-friendly gal, I decided a while ago to start making my own clothes. It’s really difficult so far for a plethora of reasons: the main one being that I own a sewing machine that was my Grandma’s, and hence, all sewing tutorials are far too advanced for my “time” machine. Another difficulty is that I don’t know what I’m doing.

But the one stumbling block that took me completely by surprise and frustrates me that I didn’t predict it is that I have had to become well-acquainted with my body.

It’s been a difficult ride. If I’m being completely honest, I usually spend most of my time pretending my body isn’t even there. Not because I hate it or don’t like it, but because there’s just something really weird about having a body that moves and burps and needs feeding and all that. If I could be a brain in a jar that communicates solely via shared lucid dreams or uploading things directly into other people’s brains, that would be great.

It would also be great if I only ever had to look at my reflection when bending to collect water from a well or stream, but it turns out I don’t live in a forest and I do actually have bones and blood and flesh, and my body is definitely alive. How gross! How uncouth! How petty of my parents to force me to exist!

Anyway, I now know the measurements of my body down to the last millimeter. It’s a strange thing to know, and I’m not sure it’s entirely normal. I could frame this as being more ‘in tune’ with my body, but I can already harmonise sneezing with the claps of my thighs, thank you very much.

I’m not more in tune with my body, just cripplingly aware of it.

As I continue trying to measure myself against fabric, I’ll become even more acquainted with my corporeal form — how it swells and shrinks, how un-flexible I am, how my legs are ludicrously out of proportion compared to my torso. I have never wanted to be a ghost that haunts the girls’ bathroom at Hogwarts more than I do now. Who knew, that after all these years, the Harry Potter character I wish I could be like is Moaning Myrtle? The weird thing is, I thought I had all this body stuff figured out.

When I read Naomi Wolf’s, The Beauty Myth at age 15, I became fervent in my body positive philosophising; We shouldn’t be ashamed of our bodies, and there are very powerful people who insist that we should be. An active part of resisting the patriarchy is resisting the urge to police our own and each other’s bodies. I mean, as a very trimmed down summary, that’s correct, right? I thought I understood it.

Or perhaps, I only understood it intellectually. It really shocked me that when I first measured myself to get an idea of how wide I needed some fabric to be, I was horrified at the number. Ashamedly, I had to admit I wished it was smaller. Me, the girl known amongst my friends as “the feminist one” was anxious about a number on a bit of tape measure. God, isn’t it annoying? It’s awful how easily thrown I was by my own measurements – measurements that are so arbitrary they’re almost pointless.

After all these years, perhaps I’m not actually so body-positive.

Maybe I’ll start being body negative. You know, just summon the flames of hell every time I have to measure myself, and then tell the devil directly that he can have my soul in exchange for some jeans that actually have decent-sized pockets. Every time I look at a part of myself and feel strong, gloom-ridden feelings, I shall feed myself after midnight and descend un-elegantly into a gremlin style frenzy. Stores and their mannequins will be destroyed, and a family come together at Christmas time over an attempt to stop my menacing wails. Those are just some ideas I’ve been throwing around.

Another solution is to simply measure things by different standards. Laid down, I am roughly the same length as a teenage alligator. My waist as wide as a substantial arctic roll and my shoulders are as broad as a window frame. No need for centimetres and inches anymore when rough estimations will do! I suppose my being bigger than I thought just means I yield more power that I haven’t even began tapping into.

I have quite a few more inches of body than previously assumed, and I will now make use of it. Maybe I’ll put on even more weight and become the Greek goddess I’m destined to be. Screw Moaning Myrtle. Persephone, ruler of the underworld, prepare thyself, for thine ass will kicked by someone equally as breathtaking. I take back what I said about screwing Moaning Myrtle. She’s fine as she is. Also, if Persephone wants to be my BFF, I am open for applications.

It’s weird that clothes and clothes shopping is stereo-typically a ‘woman’ thing, yet shopping and trying on clothes can be an exercise in stretching the limits of your anxious brain.

Changing rooms become a battle ground. Not to mention the fact that if you’re plus size, the clothes that fit you are relegated to a tiny corner in the back of the shop, if there are any there at all. Cheery music, glossy billboards, and bright lights make you feel like this is where you are supposed to be, yet you can’t help but feel out of place like a cat in a bath, or those whales that get stuck in the Thames, or a sheep that’s wedged itself into a tire swing.

I’m trying to get to a point where I understand my body without any shame attached to it, and I can enjoy existing in my body without wishing it didn’t exist. I want to be able to measure myself, notice I’ve grown outwards a little, and instead of sinking into a pit of despair, get excited about yielding more power. Or if that fails, just be blithely accepting of it. Perhaps when I’m 80, I’ll still wish I was a haunting spectre. For now, I don’t think it’s too ambitious to work towards understanding my own fleshy and very alive self.