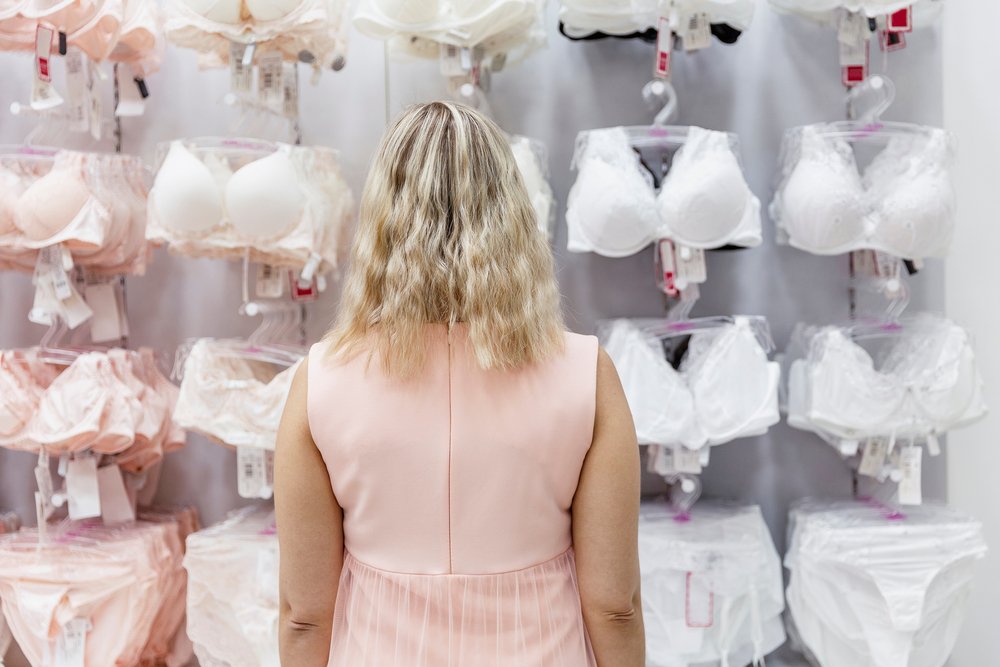 Too Close for Comfort: My First and Last Bra Fitting

“I am not going back to that camp again without breasts,” I told my mother.

I was late to develop. Everyone else in my sixth grade class seemed to have perky breasts or had announced, not always quietly, that they had started their period. Not me. I was still a tomboy, kind of gawky-looking and still apt to run and jump around with the boys. My mother told me not to worry, that my breasts would grow in soon. Wrong! It wasn’t until two years later, when I was 14, that I actually needed a bra.

Meanwhile, my sister, almost two years younger, had developed quite early. At age 11, she had an ample bosom while I was still staring at my flat chest. She’d tease me, “If you’re nice to me (which I often wasn’t) I might let you borrow my bra.” It was so humiliating! Then at age 14, I developed some little bumps, and they grew. They looked like little pancakes sprouting from my chest, but hey, it was something.

My mom gave ma a bra — it was a white, no-nonsense garment without lace or other decoration. I don’t know where my she found it but it may have been the Sear’s catalog. That bra wasn’t very comfortable, and truth be told, I didn’t like wearing it at all. It felt like daggers sticking into my skin. But I persisted. I wanted desperately to be part of the crowd, accepted by the other girls in the locker room when we changed for field hockey.

I was then in the eighth grade and the size of my breasts mattered. At least to me.

Then I grew some more. My mother decided it was time to go and see “the bra lady” on Bathurst Street. I was curious, though somewhat appalled at the notion that someone made their living touching, handling women’s breasts and finding appropriate undergarments for them to wear. What kind of profession was that?  Whatever did she major in while in college to become proficient at her craft?

So we drove through the city one humid summer afternoon, in the guise of getting ready to return to school. I didn’t know what to expect. The bra lady was an elderly woman (or so it seemed to me), probably 55 years-old. She asked me to go into the changing room and take off my blouse and bra. She said she would be right in.

What followed can only be called a comedy of errors.

I didn’t want to take off my bra and be touched by her, so I left it on thinking she could feel around it. Of course, she couldn’t. And wouldn’t. She asked my mother to speak with me and get the (damn) bra off so she could do her business. I finally relented, but not without a few tears. With sticky, knotted Kleenex in my right hand, I prepared for the assault.

The woman took a good look at my physique and cupped my breasts. I was absolutely mortified. No one, not even my mother, touched my breasts. Then I giggled nervously. She smiled gently and then left.

When she returned, she had three or four different models for me to try. One ivory-coloured one had a small amount of lace around the top and felt reasonably okay. The others, which had underwire and came in cream, rose and black, were not nearly as comfortable. We agreed the ivory-coloured bra was the best one for me and my mother bought three of them.

On the way home, we stopped for ice cream, a recompense for the extreme discomfort of the outing. All in all, it had been a roaring success. I was now set for high school with my new brassieres in hand, sporting breasts a girl could be proud of… and almost recovered from my bra-fitting experience.