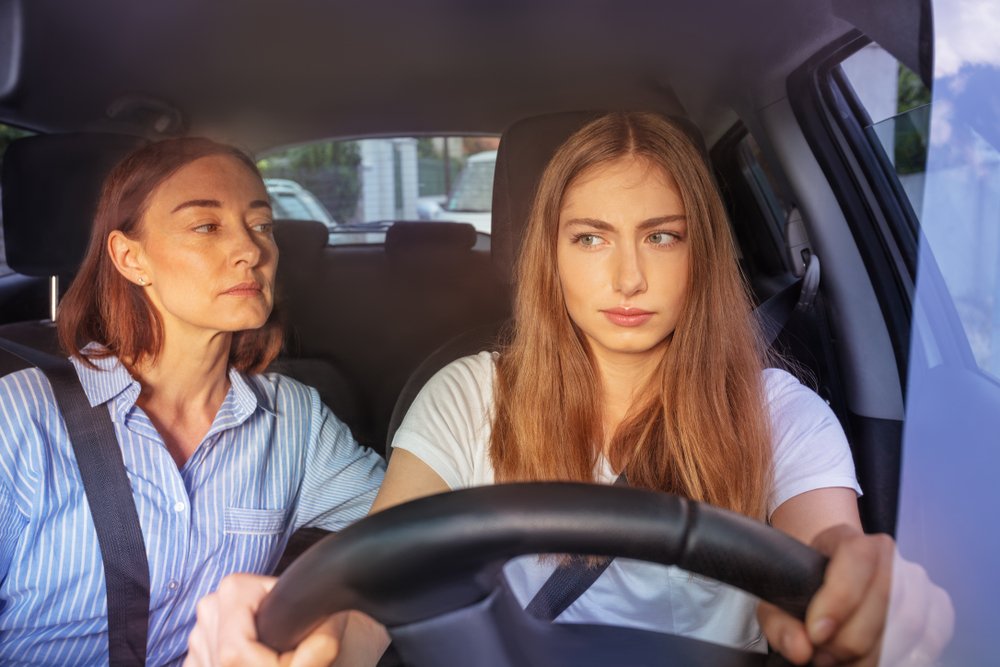 Not Driving Myself Crazy

I learned to drive at the age of 16, as most American kids do. It surprised me when I lived in London as a college student that English kids didn’t usually learn to drive that young – they waited to learn until they could afford to buy a car. Maybe living in the land of castles and princes translates into expecting a coachman to handle the damned business of driving. But in the United States, getting your learner’s permit at 16 and wigging out your parents remains practically a rite of passage.

I never felt confident behind the wheel, however, which I attribute to my neurotic mother’s discouragement of my driving.

It was okay for my three brothers – they could borrow the car whenever they wanted to, with my mother’s full approbation – but for her daughter to take the car even for one single block down to the drugstore was a very big deal, indeed. Argh! To be left alone in the car was something I devoutly wished for, but it seldom came to pass.

My mother hadn’t learned to drive herself until the age of 33 – my father had always had to take her wherever she needed to go. Was she physically limited? No. Was she excessively timid? Again, no — my mother was a firebrand who would take on anyone who annoyed her. She was just sort of behind the times. And her mother, my grandmother, never learned to drive.

She tried driving a Model T once and said her legs weren’t strong enough for the pedals. I think she gave up too easily, willing to let my grandfather ferry her around. That was in the 1920s, before power brakes. It was probably because of all that history that Mom didn’t see much need for a girl to learn how to drive. But of course, kids always see through the hypocrisy of their elders, and I was no different.

My mother drove me crazy in the car because she was always a nervous wreck. Like lightning, when she got upset she could be scary. In my twenties, it aggravated me terribly that my brothers were all so skillful and confident behind the wheel, yet when I was driving with Mom seated next to me in front, all I got was a barrage of criticism, a non-stop diatribe consisting of shrieking advice: “You’re going too fast! In a hurry to get home?  There’s a red light ahead! What are you, color blind? Don’t hit that pedestrian! Gee, he’s good looking. Put on your blinker! This isn’t a good place to park! Watch that curb!”

If I’d had a more feminist mother, I am sure I would have developed stronger driving skills.

And my father seldom seemed inclined to take me out on the road, though he didn’t discourage me, either.

Women in some Arab countries are only now beginning to be allowed to drive, and given how important mobility is to independence, achievement of goals, education, and work, the fact that it has taken so long and that women needed to be granted permission to drive is astounding. It’s like women getting the vote. After all, driving is a standard part of the everyday life of most American women.

But it’s not part of mine. Being on the highway – which all my friends have done for years without thinking twice about it – has always made me nervous, because everyone goes so fast and I am insecure about my own ability to navigate the lanes and at that speed. What if I crash? Am I going to end up in an ambulance? Would I endanger others and lose my license? Am I wearing clean underwear in case a nurse had to check me out in the hospital?

When I moved home from New York City, about to turn 34, I rented a car for two weeks just to get around. The second day I had the car, my mother absconded with the keys and hid them. I was furious. Was I suddenly a two-year-old with no discretion, motor skills, or self-management? I only got the keys back from her just before the car was due back at the rental agency. I was angry because I’d already paid a $250 rental fee and didn’t even get to drive the car. What a waste – and at that point I thought my mother had truly lost her mind. (It wasn’t the first time I’d thought this.)

Today my brothers laugh about how as teenagers they were amazed whenever Mom let me use the car.

“Look!  Unbelievable!  Martha’s driving!” They behaved as though it were the Second Coming. They pointed and shouted and waved at me. They wouldn’t have raised their own daughters the way I was raised, if they’d had any. But my brothers, having grown up in the 1970s, are all more progressive and forward-thinking than my mother was.

Now, at 63, I haven’t driven in 18 years. You, dear reader, might find that surprising, but I no longer even own a car. I never got over my discomfort with steering and changing the radio station at the same time. A car seems like a huge, clunky piece of metal to me, one that gets a person around but is filled with the potential for immediate danger. Even when I ride in a taxi, I’m nervous — and even though those drivers are supposed to be experienced, I can’t get over the fear that my life could end at any minute in a ditch, or worse, in the window of a retailer I can’t afford to shop at. I dislike cars. I live in the city, and get around on public transportation.

My mother, wonderful as she was in many ways, did me a great disservice. She’s been gone for 28 years now, and I’ll never forget lots of wonderful things about her, but good grief! — if only she had imbued in me the ability to feel confident behind the wheel. My life could have been more enterprising, more courageous, more normal.

All my female friends and relatives are happy driving and it never ceases to surprise them that I gave up on it at such a young age. I feel like I missed out on a world of adventure and a fantastic and modern new way to use my brain. All women should drive. Driving is a skill every capable, sentient person ought to possess, and I have many regrets about not being more mobile.

So every once in a while I do consider driving again. And I’m pretty sure my legs are strong enough for the pedals. In fact, right now I have my eye on a car parked outside my building, that maybe I could hot wire.