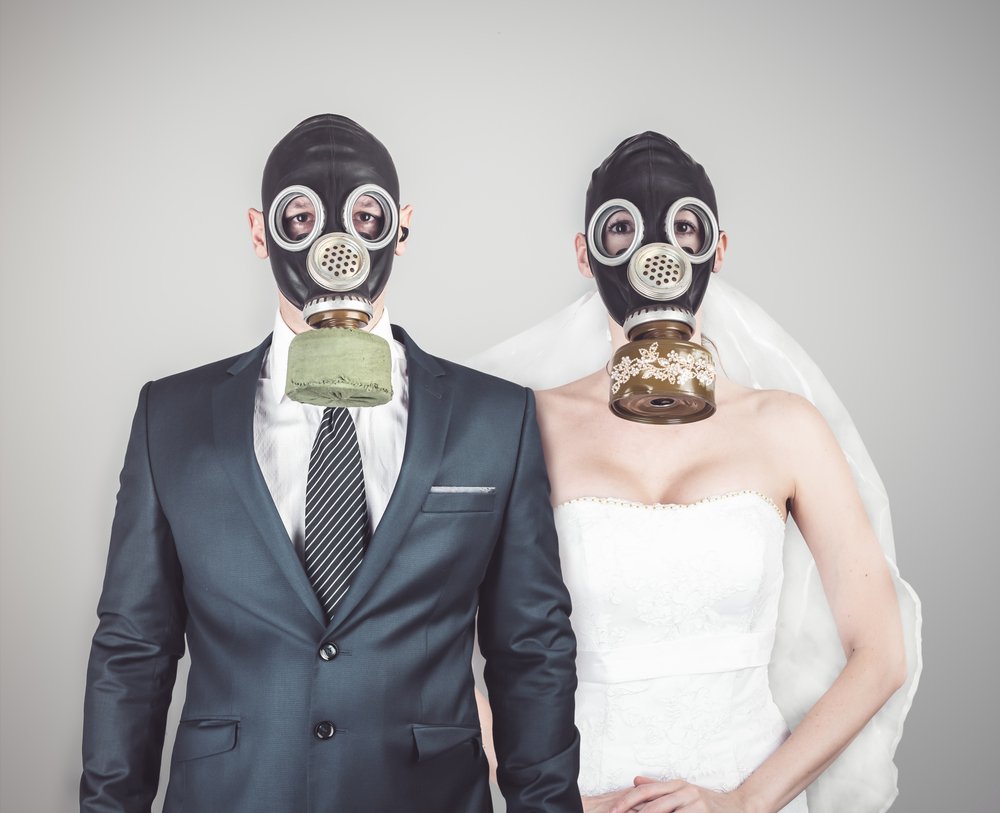 For better or for worse, COVID-19 has really thrown a bouquet of toilet paper into the plans of couples who planned to get married in the past year.

According to wedding industry reports, up to two-thirds of couples intending to get hitched in 2020 decided to postpone the big day until they could say “I do” without having to hand out masks and hand sanitizer at the rehearsal dinner.

Let’s face it: while many brides dream of getting married in white, even a Vera Wang veil can’t save an off-the-shoulder hazmat suit.

I’ve seen the impact of the pandemic on wedding plans up close and personal. One of my best friends had planned to get married in May 2020, but when COVID-19 hit, she postponed the ceremony indefinitely. Instead, she and her fiancé and their four teenage boys decided to shack up and raise two orphaned squirrels until the world returns to semi-normalcy. I believe they’ve trained the squirrels to serve as ring-bearer and flower/nut girl.

Of course, some couples threw caution and common sense to the wind and went ahead with their big non-socially distanced plans. Case in point, the folks in Maine who threw a wedding with 55 attendees that was later linked to 177 COVID-19 cases, and 7 deaths.

Isn’t marriage hard enough without starting off by killing members of the wedding party and a few neighbors because you just had to hug everyone in the reception line?

Pandemic restrictions in most states and localities have made the typical wedding difficult, if not impossible, with the limitation on gathering sizes, social distancing rules, and mask requirements at indoor events. In addition, hotels and other venues in many states are prohibited from hosting large events of any kind – ergo, no weddings or cosplay conventions. And the unsafe nature of travel and restrictions on entering other countries have made destination weddings almost unheard of unless the destination is “the room in the house that was most recently dusted.”

Some creative couples have said “I do” in safe and more responsible ways during the time of COVID-19, for example on Zoom and other social media platforms. There’s no data to back me up, but I’m willing to bet that a lot more dogs and cats have been part of weddings during this pandemic than ever before (whether invited or not).

The most popular pandemic option for getting hitched in the past year has been the mini-wedding.

Mini-weddings include only a few guests (usually 5-10) who are in the same “bubble” as the engaged couple. (Note: by “bubble,” we’re not talking about the giant inflatable bubbles you can buy online that hold one human at a time, although if I ever get married again, I’m totally doing that, pandemic or no pandemic. It will really keep down the cost of an open bar.)

A mini-wedding is exactly the kind of wedding I had back in 1974 when I married my first husband at the ripe old age of 21. Who knew I was such a trendsetter? We were married in a gazebo in a city park on a day so rainy, I kept an eye out for a rescue boat. Other than the Justice of the Peace, the only other humans in attendance were his parents and my best friend and we all stood far apart because by that point none of us liked each other much.

We spent a total of $25 for the marriage license and $35 for the dress that I would later wear to job interviews. Compare our $60 budget to the average wedding cost of $33,900 in 2019. Now you know why I have a retirement plan! To top it all off, we spent our honeymoon in a U-Haul driving across the state. Did we know how to party or what?

But just because a wedding is tiny doesn’t mean it can’t be memorable and fun.

As someone who has planned three of her own weddings in the “before times” and spends her time googling “giant inflatable bubbles for adult humans,” I think I have some great ideas to share with you:

Giant inflatable bubbles for adult humans! Let’s face it, I’m probably not going to get hitched again, so do it for me! And take lots of selfies!

Even if your wedding is small, holding it outside is still safer than holding it inside. The good news is that there are so many lovely outside venues that cost little to nothing, such as an uncrowded beach (perhaps in the middle of winter to make sure drunken hordes of college students don’t arrive mid-ceremony), on a snowy mountaintop, or in your neighbor’s well-manicured backyard while they’re out grocery shopping.

A tiny wedding = a big opportunity for a themed wedding! And why not choose a theme based on one of the shows you’ve binge-watched while being cooped up in the house together?. Whether it’s “Bridgerton” or “Dead to Me,” you can relive all the fun times by dressing as your favorite characters, decorating for the time period, and in the case of “Dead to Me,” removing a body from the pool.

Music is always important, but chances are you won’t be able to get the string quartet or death metal band of your dreams during this pandemic. But you probably have friends who have taken up a musical instrument who would love to play for you as you walk down the aisle and later when you air hug your wedding party from across the lawn. I have been trying to learn “Hotel California” on the keyboard and would love to play at a friend’s wedding. After all, there are no better words to summarize marriage than “You can check out anytime you want, but you can never leave,” are there?

You’ll probably both (or more than both, who am I to judge?) want to dress up for the big little day, but give a nod to the pandemic by wearing your pajamas under your bridal attire. Later, at the “reception,” you can strip down to your PJs while creating a TikTok dance video.

Now is definitely the time to have an open bar, or at least an ice chest stocked with craft beer. You can probably keep all five of your guests sloshed for less than six months’ of Netflix.

Why not have someone bake you a wedding cake that looks like a stack of toilet paper rolls? If not now, when?

There may not be any humans to throw the bouquet to, but your cat would probably be thrilled to have something new to shred while you shoo people away so you can start your honeymoon in the same place you’ve been isolated in for the past 302 days, give or take.

However you get hitched, please be safe! And may you soon be able to honeymoon somewhere outside your own apartment.