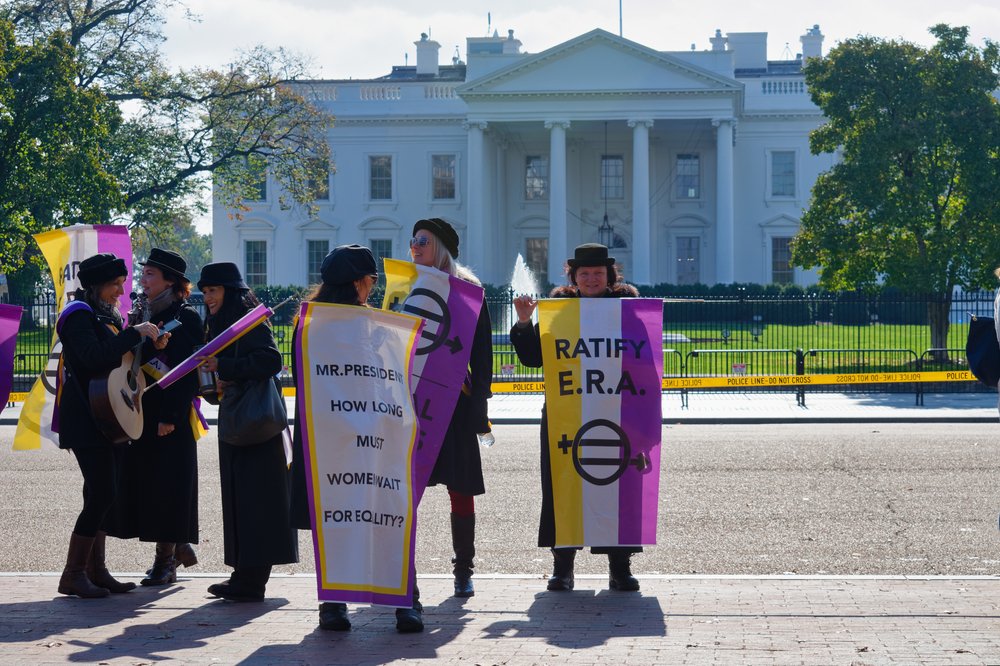 Martha Jefferson read the Declaration of Independence, which her husband had just signed, and noted the line “All men are created equal.” In a huff, she yelled, “Whateth the hell?” at Tommy and threw a hard potato roll with force at his overly large head.

Dolley Madison, who may have been a little OCD had such a diagnosis existed back then, counted the number of times the pronoun “he” was used in the newly ratified U.S. Constitution that her husband had left lying in the middle of the dining room table, got depressed, and began to drink heavily.

Elizabeth Cady Stanton and Lucretia Mott organized the Seneca Falls Convention to give birth to the women’s rights movement. This was before epidurals were available, so the process was painful and included a lot of profanity. “We’ll give those addlepated batchelor’s sons something to cry about!” Elizabeth wrote a “Declaration of Sentiments,” which made a slight tweak to the Declaration of Independence:

“We hold these truths to be self-evident: that all men and women are created equal.”

As she left the convention, three men told her to smile and one said she had resting bitch face.

An unknown young woman struggled to breathe in her tight long-waisted bodice as she walked past a store window featuring men’s pants. She noticed they all had pockets and made a mental note that someday in the not-to-distant future, women, too, would have pockets in their garments. Later that year, she burned her bustle in the fireplace and her father declared her mad.

The National Women’s Party, NWP, was founded. Their motto was, “Our eyes are up here, mister.”

After having gained the right to vote (for white women; women of color couldn’t exercise their newfound voting rights due to racially biased voter suppression laws), Alice Paul and lady lawyer Crystal Eastman – she was required by law to call herself a “lady lawyer” so no one would get confused – drafted the “Lucretia Mott Amendment,” the original ERA. It promised that,

“Men and women shall have equal rights throughout the United States and every place subject to its jurisdiction.”

Their husbands demanded they cook them dinner and bring them ale when they returned home.

Florence Kelley (no relationship to Florence Nightingale or Florence Henderson) accused the NWP of “threats of a sex war.” Having overheard his mother, her teenage son, spent several afternoons in his bedroom fantasizing about whom he’d like to “battle” in the coming sex war.

Susan B. Anthony’s nephew, Republican Representative Daniel Anthony, Jr. and future vice president to Herbert Hoover (not the vacuum cleaner), Charles Curtis were pressured by the NWP to introduce the earliest version of the E.R.A. to Congress. And with that, the sex war began, even though bullet vibrators wouldn’t be invented for decades.

For decades, the ERA went nowhere, just like the quest for run-less hosiery. Over-achiever Alice Paul rewrote the text of the amendment to include the phrase “shall not be denied or abridged” (which echoed the wording of the 15th and 19th Amendments) and inserted the phrase “not all men” several times. Finally, it passed the Senate.

During the time of sex, drugs, and rock and roll, second-wave feminism (and chlamydia) was born, possibly on a tie-dyed blanket at Woodstock. Knowing that she’d passed the torch, Alice Paul finally got to rest on her laurels.

Democratic Rep. Martha Griffiths, who would later be called the Mother of the ERA, brought the amendment to the floor of the U.S. House. Griffiths also played a role in including the prohibition of sex discrimination under Title VII of the Civil Rights Act of 1964. She was one bad-ass shero, but those are not the words her male peers used under their breath when she insisted on using their bathroom because there were none for women.

The ERA won bipartisan support in both chambers. Also, the Sylmar earthquake struck Los Angeles. The two are probably not related.

Thirty-three states ratified the amendment. Gallup polls showed that almost three-fourths of Americans supported it, the same number who wanted pizza instead of pot roast for dinner.

I discovered the guy with the same job title I had was making 40% more than I was, so I began stealing his lunch from the refrigerator. He never caught on because he was truly an idiot.

Phyllis Schlafly, a woman who got orgasmic at the phrase “barefoot, pregnant, and in the kitchen,” created STOP, an organization dedicated to fight the passage of the ERA. She warned that the amendment would eliminate government distinctions between men and women. Her high school biology teacher offered to give her a refresher course in human anatomy, but she turned him down.

Susan Deller Ross and Ruth Bader Ginsburg helped get the Pregnancy Discrimination Act, an amendment to Title VII, passed. The next year, 87 men were fined for patting women’s bellies for no reason.

The clock ran out on the time limit for full passage of the ERA. Phyllis threw a party, but it was one of those parties with lame music and light beer. Most people went home by 9 p.m., claiming they had to pay the sitter double if they stayed longer.

Legal scholars argued that the time limit for passage of the ERA could be reversed. And, to reinforce their misogyny, five states—Nebraska, Tennessee, Idaho, Kentucky and South Dakota—rescinded their prior ratification of the ERA.

Phyllis Schlafly died. Now THAT was a party!

Nevada ratified the ERA, although there is a high likelihood voters thought it had something to do with brothels. Illinois followed suit soon after (the ratification, not the brothels). Virginia was all set to join them, but a cowardly state senator found that his penis objected, so he hopped on a plane and missed breaking a tie.

Reflecting back on the past four years of a government attempting to shut down reproductive rights, a “president” who regularly demeaned powerful women on his Twitter account, and a pandemic which has left more women than men jobless because of childcare and home-schooling issues, this author followed in the footsteps of Dolley Madison and drank heavily… in between working hard to elect pro-feminist leaders.

Jill Biden smiled and women everywhere forgot their lack of rights and lack of pockets for a moment. But then Marjorie Taylor Greene opened her mouth and third wave feminists shaved their heads, got another tattoo, and vowed to get equal rights once and for all.