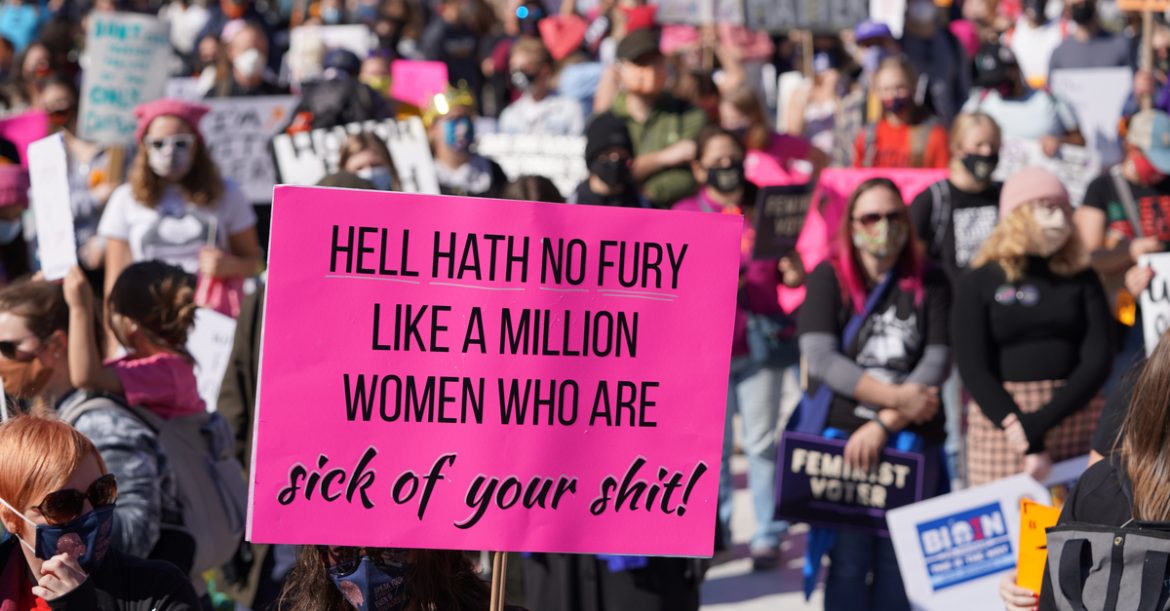 Dear Kevin, This Coup is for You – By Rebecca Houghton

Are we at risk of a coup, or a self-coup? Experts are weighing in and while they agree that President Trump, while engaging in frightening and democracy-damaging behavior, is not attempting a coup just yet, I’d like to offer my own expert opinion (I’m not an expert) on why, if there is a coup attempt, it will come on the backs of white men.

You may think I’m referring to the white men in the GOP.

The sycophants like Senators Mitch McConnell and Lindsay Graham, or even the great white man himself (yes, he’s white, in spite of his fake tan). But the rise to power of Trump and his kind is not the disease, it is a symptom of a deeper sickness in our country.

At this point in time, projections show Joe Biden winning with 51 percent of the popular vote and Donald Trump at 47 percent, with the remaining 1-2 percent going to other candidates. While Trump lost some ground with white men in this election, an alarmingly high 58 percent of them still voted for him. We should talk about them at some point, but we know where they stand, and that the majority of them are not going to be blockers to a power grab by Trump. Furthermore, a sizable minority of them, would in fact be willing to bring it to armed conflict.

And still, these aren’t the white men I’m talking about. Nope, the fate of our country does not hang in the balance because of establishment imbeciles or gun-toting militias.

Rather, it rests on my friend Kevin, my spouse, and millions more like them—the good guys, the 42 percent of white men who voted for Joe Biden, many of whom then said: “Well, I’ve done my bit.”

These men will tell you they support racial and gender equity, that LGBTQ rights are important to them, that they find people’s pronouns hard to remember sometimes, but they’ll do their best to honor them. And that’s okay, we can live with that.

But can we live with or even survive the disease of their apathy?

When I asked my friend Kevin to volunteer in a non-partisan effort to encourage people to vote, his response was typical:

“Well, I don’t get involved in all that.”

“You know, politics. I’ll vote though of course.”

“But…” I said somewhat incredulously, “you think Trump is disastrous for our country. Why not help out?”

“Yeah, I see what you’re saying, but I don’t think that stuff really makes a difference,” said Kevin, making my pulse rate go up significantly, since I’d just told him that I’d spent ALL WEEKEND volunteering.

“So, you think everything I’m doing won’t make a difference? That’s kinda,… not true. It’s proven to make a difference. Sure, it’s a numbers game, but if we all help out in a small way it adds up to a lot. Is it time? Because I can find you something quick and easy to do.”

“Nah… it’s not time,” said my friend, in a nonchalant way that made me want to scream at him: “OUR COUNTRY IS ON FIRE; DO SOMETHING!!”

He finished, “I just don’t think my getting involved will make a difference.”

Similarly, when news broke that Justice (and notorious) Ruth Bader Ginsburg (RBG) had died, women across the country reached out to each other full of grief and existential dread. My friend Elizabeth noted on Facebook the next day:

Elizabeth’s female friends knew exactly the point she was trying to make and began to chime in. Said Sarah,“I spent the morning writing postcards to GOTV in KY and met a female friend who wanted to get some postcards. My husband went for a bike ride and was surprised I was ‘still’ working on postcards when he came back. He was fine with me donating $$ to swing state races, but didn’t offer to do anything else. F—-the patriarchy.”

And closer to home, the day after RBG passed, I dragged myself out of bed after a sleepless night, determined to write even more postcards to voters. As I wrote away in my pajamas, my husband sat a few feet from me on the couch and watched two soccer games. When I asked him to help me write some postcards, he said, “You know I don’t like to get involved in politics.”

“I fully support and admire everything you do,” he said. “I just don’t think it makes a lot of difference.”

My beloved good guy husband was saying the same thing as my good guy friend Kevin, as Sarah’s good guy husband, and as every white good guy partner of every other woman who commented on Elizabeth’s Facebook post.

I’ve had a chance to reflect on what the good guys mean when they say: “It won’t make a difference.” They’re smart guys. They know on some level that “get out the vote” and nonviolent demonstrations work. So then, what they’re actually saying is:

“It won’t make a difference FOR ME.”

And here we are, with our country’s democracy in upheaval as a sitting president refuses to accept the results of an election that even international independent observers say was free and fair, and where are most of the good white men?

They’re at home telling their wives and partners to “breathe” and “calm down.” Calm down, darlings? Like when you told us to calm down after Trump was elected because “it won’t be as bad as you think?”

Well guess what my loves, it’s not as bad as we thought. It’s worse than any of us could have possibly imagined. Stop with the “calm down,” and listen.

I appreciate that as white, cis-gendered, heterosexual, able bodied men that you have never felt the sting of oppression. And that you are telling me to have faith in our systems because they have always protected you before. But they don’t protect everyone and now even these flawed systems are at risk, and you, with your white male privilege, are perhaps one of the last bastions to protect it.

If you don’t get involved now, you risk losing everything, not least, pretty much all the women in your life.

Here’s what we – the female people – are asking of you: If the women and/or BIPOC people in your life are organizing strikes, or phone banks, or marches, don’t tell them to calm down. Instead, please ask them, “how can I help?” And then don’t say “I don’t think that will make a difference.” Rather trust the people who have been doing the work all along and say, “you can count on me.”

Because dammit darlings, we need you.