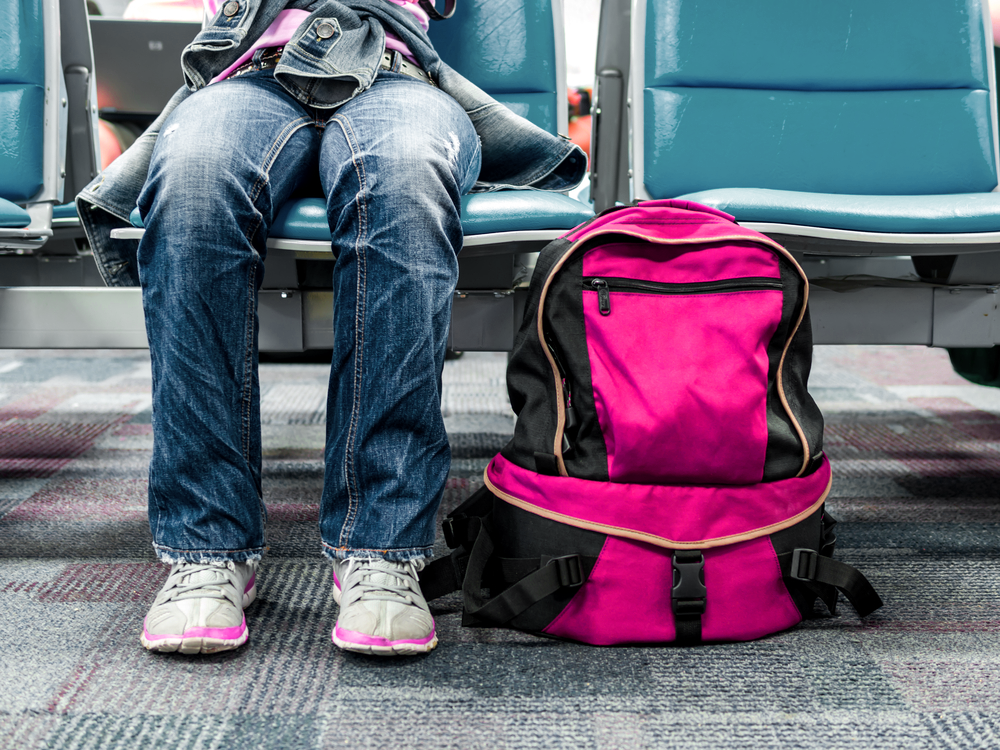 Don’t You Wish You Could Just Live out of Your Backpack and Sleep Under the Stars?

This article was written as part of a series for our partnership with The Sophia Way where we helped tell the stories of women experiencing homelessness in a new way – using humor to discuss the challenges they face everyday and appreciate their strength and resourcefulness.

Megan sat quietly at the bus stop while her back ached. The fresh breeze gave her some momentary relief. She noticed there was gum stuck to the bench that was also stuck to the seat of her pants. This was just another minor nuisance, like bags under your eyes after a sleepless night or bad breath after eating garlic. She sat there waiting, after a long journey on foot, her backpack rested against the bench.

It was spacious enough but not too big, durable, had soft padding and a built-in rain cover: i.e. the latest in hiking gear. Most importantly, it had several loops for attaching various gadgets or tools, each carefully chosen so that she could take on any possible challenge.

A ponytailed girl in an oversized hoodie appeared out of nowhere and stopped in front of her. She was carefree, with child-like innocence. It was like her parents were super heroes and she owned the whole world. With her super-human strength, she picked the backpack up by one of the straps and flipped it over as she inspected it.

“Don’t you think you’ve over packed it?” she said putting it back down.

“I’m going backpacking across Europe next month and according to the reviews it shouldn’t weigh more than 15% of your body weight. But this pack is really dope, I saw it was also recommended by that travel blogger on Instagram… You know who I’m talking about? She’s got like 2 million followers. I’m thinking about getting one like this. Are you backpacking?”

“I guess you could say that.”

Megan wondered what made this girl so perky, and if she had enough to share.

“It’s going to be so great to just live in the moment. No plans, I’ll just sleep anywhere under the stars and meet all kinds of interesting people. I heard that backpacking helps with problem solving skills and increases self-esteem.”

This girl seemed to be overflowing with self-esteem since she felt entitled enough to start playing with Megan’s backpack without even asking permission. She inspected each accessory one by one like a scientist examining an unknown species.

“Geez, you’ve got so many cool things! I didn’t see any of these mentioned in the reviews. What’s this for?”

Megan paused a moment, then began to explain her way through the various hanging objects that almost completely covered her backpack.

“This is my baseball cap with a headlamp, during the day it protects my face from the sun and it’s my flashlight at night. This is a sewing kit, I keep it with my can opener and scissors. And this is the bag I keep my wool socks in…”

“Why do you need all those socks in the summer?”

Megan noticed her freshly pedicured feet, it was clear this girl had never fully understood the value of thick dry socks after hours and hours of walking. Moreover, certain pleasures aren’t for everyone, not even the clueless self-absorbed daughters of superheroes. She decided to ignore the question and continue describing her accessories.

“I keep coffee and sugar in these two bottles, so they don’t get wet. This is a bucket in case I need to pee. Here’s an emergency belt: you can strap yourself to your backpack, so no one steals it when you’re sleeping. This is a whistle to break the eardrums of any drunks that try to grope you when you least expect it, it’s also useful for getting people’s attention, and this is pepper spray, for the more aggressive perverts…”

The girl’s jaw dropped as she listened. It was as if something brought her back down to earth and now she stumbled, dazed and unsure of herself.

“So, did you read on Amazon that you need all this stuff?”

The girl shook her head in dismay. How could she have missed all this?

She spontaneously lit up, struck by some illuminating idea. “Anyway, you forgot one of the most important accessories…” she said with a smirk.

Meagan ran through the list of items she had packed: toilet paper, pads, medicine, matches, liquid soap mixed with bleach to keep the ants away, a mirror, her sleeping bag and finally a box of dog food in case she runs into that stray puppy that had followed her last week… it would have been nice to keep him. Other than that, she couldn’t think of anything she was missing.

“You forgot your selfie stick! How are you going to make everyone jealous of your travels?” She shouted then got on the bus quite satisfied with herself.

“See ya later!” she waved looking back from the door. “Have a good trip!”

“You too!” replied Megan as she pulled a cardboard sign from her bag. She set it on the ground in front of her, preparing to take on the day ahead.

“HOMELESS,” it read. “I won’t murder for money, but I’d kill for a burrito with extra sauce.”