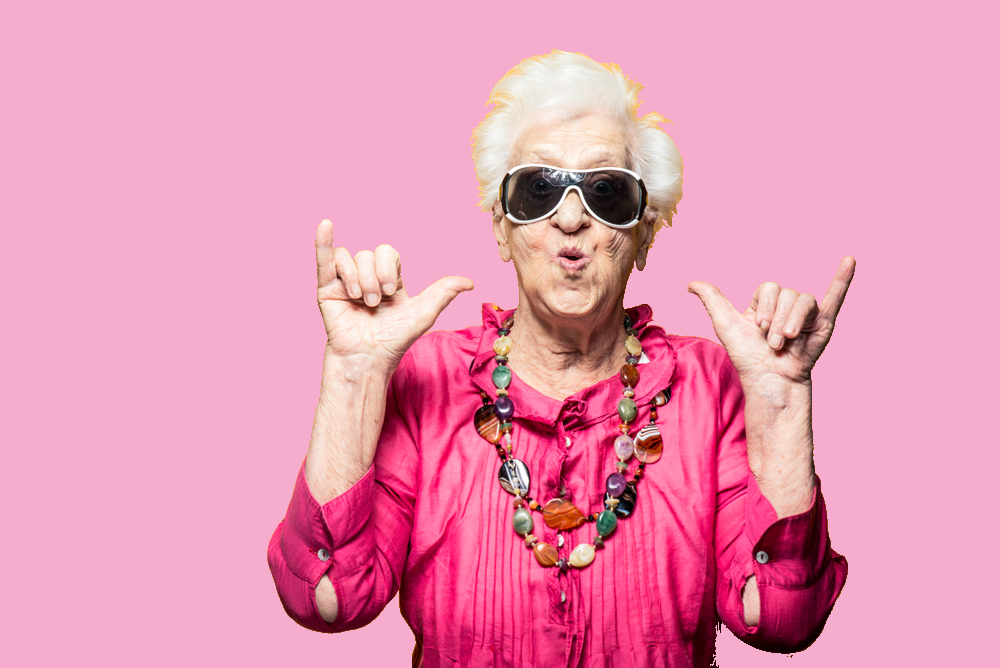 My Grandma Is Cooler Than Yours

We often think of grandmas as lovely old ladies who play bridge, decorate their homes with collectable figurines and share stories about their cats – this is definitely my husband’s grandma – but not mine. My grandma was the coolest.

My grandma still baked and did other granny-like things, but she also loved dark beer, cussed like a sailor if she lost a board game and didn’t shy away from conversations about sex or other “shocking” topics.

I’d love to tell you all about this amazingly strong and independent woman’s life, which was full of mind-blowing life lessons, but we don’t have that kind of time. So here are just a few of her gems of wisdom that every young woman should know.

1) If you act weird enough no one will mess with you.

My grandma lived in another town and on Friday I would take public transit to go stay with her for the weekend. Not unlike Little Red Riding Hood, at 16 I was able to attract plenty of unwanted attention. So, before that first trip, my grandma told me how to keep people from messing with me: she demonstrated how shaking my head and body wildly would deter people. Her point was that bad people won’t mess with you if they think you are weirder than them.

2) If you really want to get to know your partner, take them camping.

My grandma always said the only way to really know someone is to get them outdoors and see what they are made of. I can attest to this because 6 months into dating my husband we went camping at the beach. I let him lead when we started setting up camp despite years of camping experience because I didn’t want to be a complete ball-buster. This was in spite of the fact that I had been camping my whole life. It wasn’t my best idea, but I let him be the manly man. So, by the end of the first day, we had put our only tarp under the tent and spent the night next to a very smoky fire that barely burned.

The next day when the rain came pouring down, we got honest with each other really fast. I admitted that I was an experienced camper and suggested we use the tarp as an overhead cover for the tent. Later some passersby took pity on the two of us huddled by the fire in soaking-wet hoodies and gave us some dry wood. I sweetly offered to get the fire going, since I had been building fires since I was 12. I did my magic and, poof—we had a roaring fire.

After that, we opened up and my husband admitted he had only gone RV camping once in his life. To this day I am the official fire-maker and we have established our roles… gender roles be damned.

So, the moral of the story is that people reveal their true strengths, weaknesses and communication skills when they are forced to rough it.

My grandma spoke to me very candidly about sex and not just about the birds and the bees. She told me all the details of how at 13 years old she had started making out with a cute boy, and before she knew it she had had sex. She explained that it was great and exciting but that it was also difficult to understand that it had consequences. By 14 she had ended up pregnant and married, and by age 16 she was divorced with two kids. As awkward as it was to hear her talk openly about it, I was lucky to have a real person to discuss this during my teenage years.

4) Age does not define you.

My grandma taught me this in two ways. First, she respected my opinion despite my teenage know-it-all mentality. Second, she loved to enjoy life. She had a huge crush on Sean Connery and would talk about it to everyone. She was frisky and would play grab-ass with my boyfriends to try to make them uncomfortable. Although looking back now it seems a bit inappropriate, watching an old woman in a wheelchair chase them around was pretty damn funny.

5) We all have doubts but do it anyway.

At the end of her life, my grandma was very honest about doubts, regrets, and those unanswered questions. She talked about doubting her abilities as a mother raising five kids all alone, but she figured it out and accepted the outcome. This was a shock to me because she was the pillar of our family. She was such an amazing woman and yet she still had doubts. We all do. Like how she worked at her job to pay the bills and worried she wasn’t doing the best for her kids. But she also took them on that impromptu trip to Tillamook just because she was craving peach ice cream and wanted to put her feet in the sand. Her kids remembered the beach trip much more than the days she had to work and that is all that counts… she had doubts but she did it anyway.

These are little gems of wisdom from the coolest grandma ever, I hope they help keep you out of trouble!