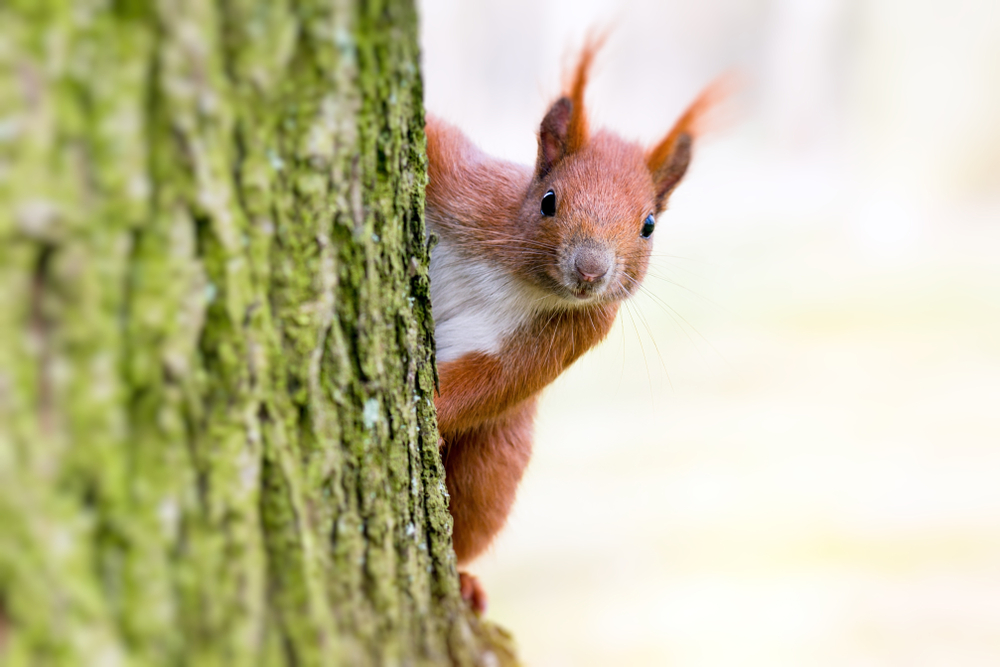 How My Relationship Survived the Squirrel Slaughter

I’ve come to accept that I will never fully understand my husband. It doesn’t matter that we officially dated for a mere nine months before getting engaged; or that our families first met at our wedding rehearsal dinner. Knowing him for twenty-five years prior to getting married wouldn’t have helped me understand why—when we have a gas station located one block from our house—he drives his giant-ass truck five miles to Costco to save eleven cents per gallon. I’ve never been a whiz at math, but?

And pray tell, why do we need 17 types of BBQ tongs for a two-person grill or 198 Comcast channels when he only watches three of them?

Recently, I designed a fancy mudroom so he would stop throwing his shoes haphazardly on the floor and stowing his work bag by the front door, completely ruining the optics of my mid-century-southern-chic style living room. In a Psy-Ops move I learned from binge watching NCIS, I painted the mudroom an inviting, manly shade of green called “Into the Woods.” Then, I purchased several rustic woven baskets for his shoes and bought him his own floating shelf-coat rack for hanging all sorts of stuff—like ball caps, bags, and heavy duty air fresheners. And yet, thousands of dollars later, his boots are still on the floor; and now I find his work bag invading various undesirable locations throughout the house. Not just the formal living room.

I love this man in a way that’s inexplicable, so I tolerate all of these things because it builds my character in novel ways.

But one Saturday morning, he finally crossed the line.

After breakfast, I went upstairs to start a load of laundry.

I must have spoken into his bad ear, because what I said to him as I walked out of the room was: “I’m going upstairs to start laundry.”

What he heard was: “I’m going upstairs to get ready.”

He thought I was going to take a shower, and would then proceed to do a variety of things he will never fully understand—an activity that generally takes between 45 and 55 minutes. But instead, after roughly eight minutes, I headed back downstairs to peacefully finish my cup of coffee.

As I descended the stairs into the living room (nearly tripping over his work bag), I heard a loud “BLAP” coming from our sunroom’s back stoop. Afraid he’d hurt himself, I scurried around the corner to ensure he was okay. To my best recollection, here is what I saw:

My 6’2” husband, standing in his camouflage boxer shorts and matching camo-Crocs pointing an air rifle in the direction of a tree. On the ground next to the tree laid a squirrel, face-down like a mini version of one of those popular cowhide rugs: dead as a doornail.

In fairness, I wasn’t exactly stunned that my husband was shooting an innocent-ish animal. He grew up in Minnesota and has been hunting since childhood. He owns rifles and does other rednecky things I pretend don’t exist. For example, he donates money to Ducks Unlimited: an organization whose sole purpose is to conserve land for ducks SO THAT PEOPLE CAN SHOOT THEM. He knows the difference between a buck and a deer. See what I mean? More than anything, I was upset about the fact that he was brazenly (and expertly) hunting squirrels in our city backyard and simultaneously trying to hide this activity from me.

Before I could get a word out, my brain swirled with random thoughts: If there is one, there is always more; if he’s throwing these rodents in our trash can, then I’m going to shoot HIM with the air rifle. Then, the inevitable question: Is squirrel murder legal in the state of Tennessee? Oh dear God! I’m the president of the HOA! What will the neighbors think?

Finally, I shouted out the open window:

“What the hell are you doing?”

I knew what he was doing, but I wanted to see what he had to say for himself. He was shocked by my presence, lowered the rifle and slowly turned to face me:

“I thought you were getting ready?”

“No. I said I am going to start laundry.”

“Oh? Please tell me how long this has been going on? How many?”

I felt like I was having a conversation with someone I’d just found out was cheating on me. Was I over-reacting? No, I decided, I was not.

The fact that he’d lost track probably meant it was more like 20. We had a full-fledged squirrel slaugther on our hands, and I would most certainly be implicated. I continued to push for answers.

“And how are you getting rid of these DEAD SQUIRRELS, plural?”

At least he had the decency to find someone else’s trash to put them in. What I really wanted to know was when. The man worked 10 to 11 hours a day, five days a week. I worked from home,  meaning I was always around. Was I really this oblivious? What else was going on behind my back? I should have known better than to ask, but I finally caved. His answer put the frozen icing on an already cold cake.

“To get ready or to start laundry?”

“When I come back I better not find more dead squirrels in our backyard. Also, let’s figure out a different hobby for you.”

He knew he was in trouble, and he didn’t try to defend himself. In fact, he was probably shocked I hadn’t figured it out sooner. As I thought through why I was so upset, it became clear: Unlike going five miles out of his way to get gas (at least you end up with gas) or throwing his shoes all over God’s green earth (it’s fine, he’s just being a little lazy), a squirrel mass extinction event is an entirely futile exercise. What’s more? Those mother-effers come back with a vengeance. Instead of four semi-annoying squirrels invading our bird feeder, we suddenly had fifteen rabid ones jumping at our glass windows.

After I composed myself with a hot shower and a kaolin clay face mask, I suggested we relocate the bird feeder to a place in the yard that was out of direct eyesight from our sunroom. This meant the squirrels wouldn’t taunt my husband on a regular basis while he enjoyed his coffee, and I felt more confident that he wouldn’t have a relapse.

After a few weeks, the squirrel army—sent to avenge their fallen family members— finally calmed down and my husband seemed all-around less anxious. I was mostly relieved that the neighbors hadn’t mentioned anything.

To my knowledge, since the inciting incident we’ve managed to avoid another “event” and more importantly, divorce.

Next up: I’m starting a garage reno, clandestinely disguised as a project for my husband to reorganize all of his man toys.

Hubby Tales in Lockdown: Here With Us, All...