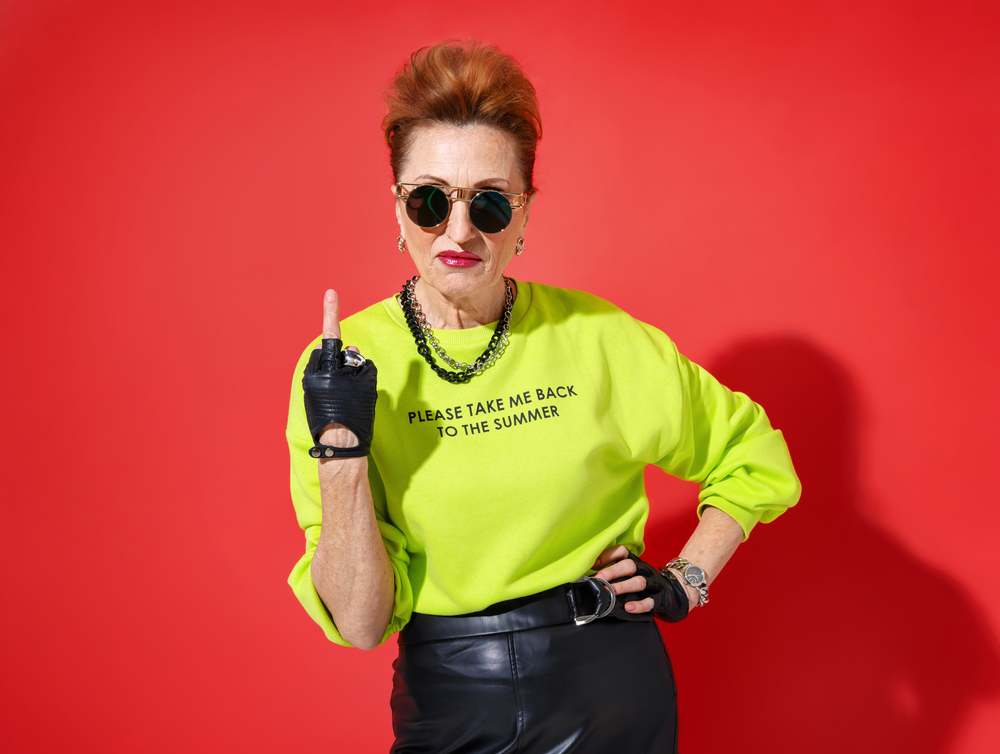 I dislike it when the media labels any woman over a certain age as “grandmother.” Especially if that age is, say, 45.

It seems that if someone has gray hair and presents as female, journalists don’t know what to call her. They’re certain “old broad” isn’t right and “elderly chick” doesn’t have the right ring to it either. So, they go with “grandmother.” In contrast, in most news stories about men the same age, the word “grandfather” (or even “grand-dude”) is almost never tossed around. Instead, reporters write headlines such as “83-year-old man finishes marathon, then wins chess game with trained pigeon.”

If we’re being truthful, the word “grandmother” conveys a lot more than age. It brings to mind a woman who saunters around in slippers and a housecoat, her pockets full of butterscotch hard candy and tissues. A woman who looks forward to Bingo Tuesdays and knits sweaters for her 27 cats. What it doesn’t paint a picture of is a woman who has lived a long life in which she was and still is a unique individual whose stories might just blow away everyone’s stereotypes (if anyone stopped to listen).

I’ll be 63 this week. I don’t have gray hair (thanks to good genes and vegan hair dye). I am not a grandmother – because I forgot to have children. Oops! I’ve never knitted sweaters for cats, although I did recently search for matching sweater sets for humans and dogs on Etsy. (I want the sweaters, but I don’t want to do the work to knit them myself). But, because I’m a comedian who occasionally curses like a pirate; who knows how to use Twitter, Tinder, and Venmo; and who often dresses in tutus and pigtails, people have no idea how to label me. I’ve never heard anyone call me a “grandmother.” Once after I had just taught first year college students about gerunds and infinitives while hula-hooping, I overheard one of them tell another I was “weird,” I piped up and said, “I’m so glad you noticed. You should try being weird. It totally rocks.”

“Weird” is my preferred label.

Society has trained us to look at older women as too slow (btw, I will challenge you to a race-walk and win), uninteresting, too chatty, unable to use technology, and probably virgins (except for the number of times equal to the number children they have). After all, if women over 45, 55, 65 were interesting and vital, surely men the same age would date them and be paired up with them in movies, right? And we wouldn’t all be so shocked when Keanu Reeves, 55, dates Alexandra Grant, 46 and gray-haired.

As a woman of a certain age, I am blessed because I have watched some of my most interesting girlfriends age and I can see that they are just as interesting, funny, and weird now as they were when we met. I have also had experiences with women older than I am who are not related to me. All of these “don’t call us ‘ladies’” moments have left lasting impressions.

Let me tell you a few quick stories about some women that would otherwise be tossed on the “grandmother” pile:

There is nothing wrong with being someone’s grandmother; in fact, the women in my life who identify as grandmothers say it is one of the roles they love best. But if we only see older women as having value because of the generations they spawned, we devalue all women, including ourselves.

My suggestion is to make friends with an older woman as quickly as possible (before you are one yourself!) If you’re lucky, you’ll end up with friends like mine – friends who dye their hair purple, tassel-dance in pizza joints, stand on bridges with protest signs, and tell dirty jokes from their walkers.