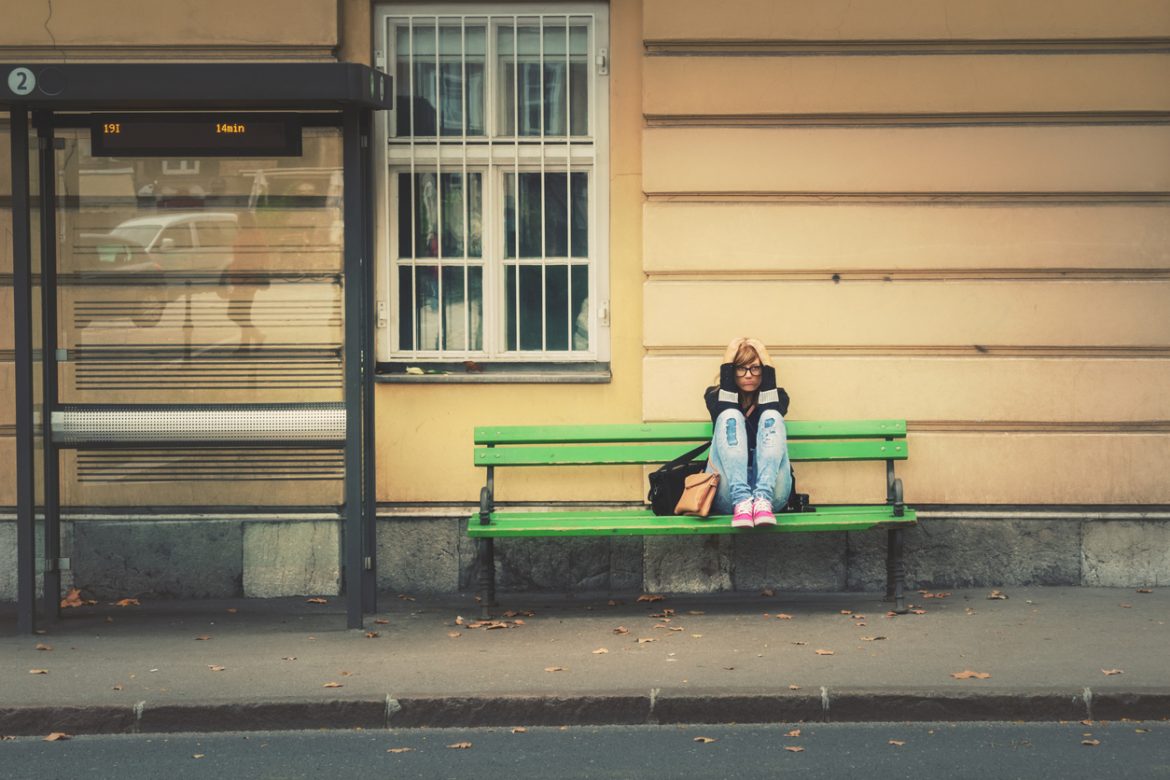 It’s not my city, but it’s a beautiful spring day.

If you walk 60 feet under a covered walkway you’ll catch bronchitis.

I just finished an interview so I’m treating myself to an ice cream.

I taste it. Mmmmmmmmm, no two ways about it, it’s disgusting.

At the bus stop, I throw out the ice cream and the trash can seems to let out a sigh (poor thing is used to it…).

A beautiful woman in her 60s is sitting on a bench with a carry-on case from an airline and tutting at the wind. I sit down next to her.

She looks at me. I smile at her and she comes out with: “What a shitty town!”

I stare at her, perplexed, yes, no, I don’t know… it’s my first time here. She responds: “Did you just get out of a job interview?”

But she was the one who brought it up???

We both busted out laughing; a mix of irony and resentment.

Well… I was never going to be thrilled about it. I’m also stuck at home after having been laid off without warning, and there you have it. You work your ass off with study and sacrifice, like so many others.

I picture the woman in her flight attendant uniform, traveling around the world, wow! “I bet you speak at least 3 languages and must have seen over half the world!”

“Yeah, sure, that’s all fine and good…what am I supposed to do now? No family, no man…”
“We’re in the same boat,” I observe laughing.

She smiles at me and says in a motherly tone:

“Come on, have you seen yourself?! You just need to hang out in the right places at the right time and you’ll find one. God…you really should!”

“More or less. Well, at this point we know how it goes with men, and work…Anyway; I’m never coming back to this town. I don’t know what’s shittier, this town or your ice cream.”

We both laugh.
She stands up, trying in vain to fix her blond hairdo, which brightens her face.

“This is my bus, see if it also goes to your town! If not, come with me to Milan!” – She says quickly laughing, dragging the suitcase that seems heavy enough to contain a body.

It’s not my bus. We watch each other for a moment while she takes a seat up front.

“Hang in there!” she calls from the bus, her head held high. The bus is so empty it seems to have come just for her. “Have a nice life!”

She nods towards the bus driver: a sixty-something man, seated, with long, wavy hair like an 80’s rocker, scowling as if he were about to head off to war or a heavy metal concert.

She says something inaudible with a smirk and a theatrical sigh, rolling her eyes.

We both burst out laughing, she on the bus and me on the bench.
The bus carries off the flight attendant and the driver from Van Halen; the irony of life and female empathy come together, between a shitty ice cream and an even shittier interview.
Sometimes beautiful things just find each other in this precarious modern world, where you could be 20 or 60, an optimist or a pessimist, from Florida or Alaska, Vegan, Martian or anything in between.