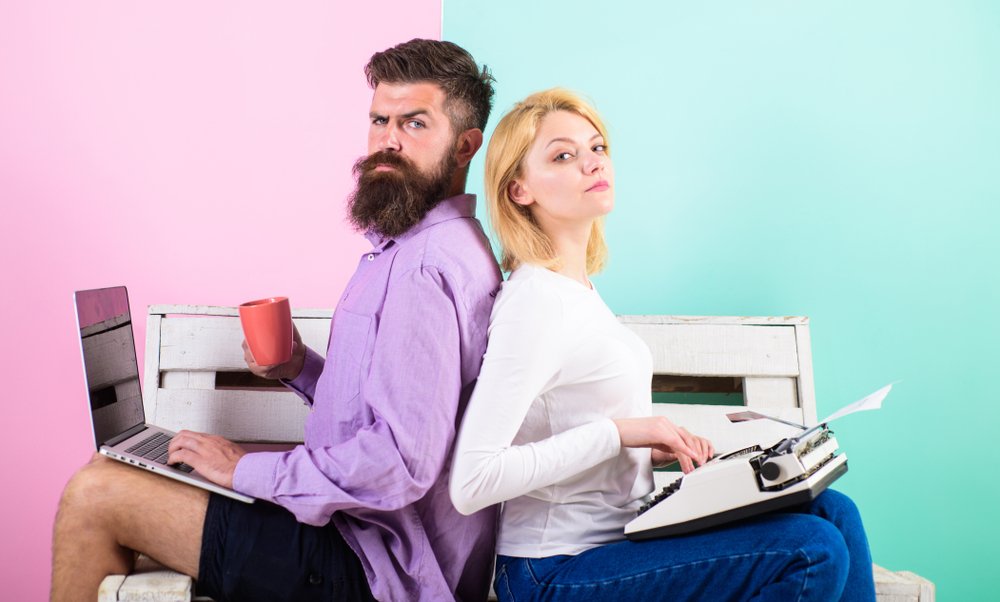 I was hired as the first dedicated copywriter at my company. It was challenging to come in and revamp guidelines and establish processes, but I love my job. Sometimes too much. Sometimes it’s hard to switch off. A lot of times I don’t. And what happens then? In steps my all-nighter in shining armor: The Copywriter’s Other Man.

I was His first. Like all relationships, it was exhilarating in the beginning. I spent hours studying Him, taking notes on which tone He’d use in different forums and other peculiarities. For example, He never shouted, but sometimes spoke in all-caps when there was something important to say.

Even though I was new, I was closest to Him, so everyone kept coming by my desk to ask what He would say or do in this or that situation. I started getting annoyed because I was just guessing, too. “Look, I’ll make some guidelines, okay?”

I got better at understanding Him. I began to anticipate His every word. I started to have the confidence to step in and speak on His behalf, and sooner or later no one knew the difference between me and Him.

One night my husband said, “Why are you talking that way?”

“Like you know something I don’t know, and you’re trying to teach me but act cool about it… like a hip math teacher.”

“A hip math teacher?!” I was mortified. I was hoping he’d say I sounded like Him.

“Yes, a hip math teacher. But you’re not hip, just trying to be.”

That was the last straw (but also the show we were watching had just ended).

I left the room, slamming the door as the “Mad Men” Season 4 credits rolled down like ugly Arial-typeface tears. My husband liked Don; I watched to study every version of Him I could be. I was basically a Madison Avenue Man, but the WeWork Woman version, working remotely from London.

I yelled behind me in all caps, but with no punctuation (the perfect headline): “THIS IS MY VOICE MAN”

“Even that!” he yelled back. “You sound like you’re a teenage boy.”

I cracked open the door and peeked my head back in. “I’m not; I just skew male and could be anywhere from 16-24 years old. Good night.”

I lay in bed stewing and thinking up quippy 42-character retorts that would fit in a push notification I could send to my husband’s phone. Didn’t he realize I had a 9-5 commitment to another, just like he did? I mean sometimes I dreamt of Him and logged into my email at 6 a.m. to make sure He was doing okay. But I didn’t have a problem. I was just dedicated.

But then I started saying “we” instead of “I” and accidentally signed a birthday card to my mom from Him. I didn’t even realize it until she told me on our way to Starbucks.

While we waited for our coffee, I was mesmerized by the slogan in the mobile pick-up area: “Now, you’ll always have time for that Starbucks run.”

Clear, direct, but a little lame, and lacking a good CTA (Google it). We could do better.

My mom put her body between me and the counter, breaking me from my trance. I stared at her beneath the brim of my bucket hat that had His logo embroidered all over like little polka dots.

“Anna, I know you love your job…but I’m worried about you.”

I blinked twice to let her know I was listening but would not waste my time pulling together words without an explicit request. Everyone expected me to just churn out copy. It was so draining and thankless.

I slouched deeper into my right hip to show I really was hip and not just trying to be.

She took a deep breath. I blinked again.

“I think you’ve become the brand.”