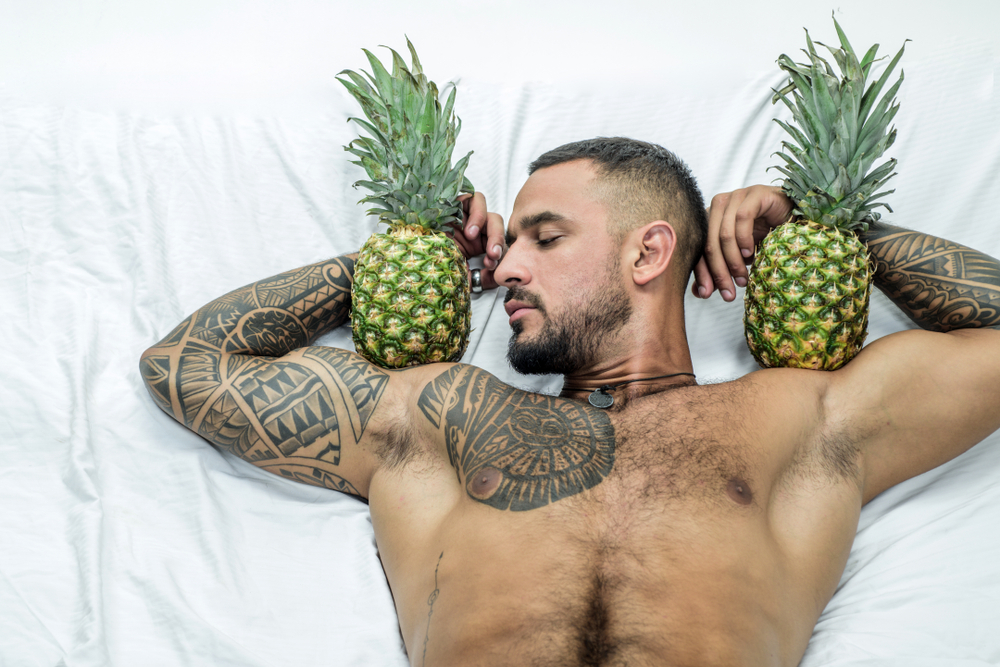 Not everyone gets the appeal of the food/sex combo. At an outdoor BBQ, I was watching the neighbors play yard games when another observer asked me, “Do you play cornhole?” to which I replied, “Only if my partner is willing and the corn is really well-buttered.” He bolted off and hasn’t spoken to me since. No sense of humor, that guy.

The Japanese practice called “nyotaimori,” is the art of eating sushi off a naked woman’s body. I couldn’t find the equivalent practice of eating food off a naked man. I might have to invent that myself.

It’s the reason I have stopped serving expensive and labor-intensive lobster bisque in empty margarine tubs and whipped-topping bowls. It’s also why I stopped wearing sweatpants and a t-shirt to bed with my man.

Also bear in mind that parsley is an effective garnish for both a serving plate and a pair of nipples. It’s the contrast in color, I believe, and a light snack for the afterglow.

I once read a magazine article that I will quote here:

“One of my favorite theories is that the bitter ones are to be avoided. It’s the ones with the wrinkled, flabby skin that are usually bitter. Select ones that are relatively heavy for their size, with skins that are smooth, taut, and shiny. When you press one with your thumb, it should feel firm and bounce back. Be 100% sure that you’ve got an un-bitter one before committing.”

This seemed like very good relationship advice. Then I read further and discovered that the article was not about choosing lovers, but about choosing good, ripe eggplants. Not the emoji eggplants; the ones in the produce aisle at the grocery store.

The article was written by a food editor, but after doing some research into cooking and eating terminology, I have discovered that many food terms and phrases translate successfully into the world of sex and relationships.

The cooking term “coddling,” which sounds a lot like “cuddling,” is defined by chefs as “with temperatures just below boiling, you will find that light cooking and gentle handling yields a more tender result.” Tell me that’s not good advice for  foreplay.

The process of braising is described as, “low and slow.” Ooh, Baby. Is it getting hot in here?

Ever heard a chef refer to a “pinch” of an ingredient? In cooking terminology, a pinch is defined as, “the trifling amount you can hold between your thumb and forefinger.” Ouch, baby, not too hard.

To “stew” means to “simmer slowly for a long time.”

To “stir” means to “mix in a circular motion.”

To “baste” means to “moisten during cooking to add flavor and prevent drying.” I think we would all agree that this extremely good relationship advice, especially for those of us over a certain age.

To “knead” means to “work and press with the palm of the hands.” I don’t know about you, but I need kneading.

Maybe you are a woman who likes to get where you’re going in a hurry. You may prefer “blanch and shock,” which means to “bring rapidly to boiling and then immediately plunge into an ice bath to stop the process in its tracks.” Not so sure about the ice-bath, but the rest of it sounds sexually appetizing.

The French, who have a reputation of being talented in both the kitchen and the bedroom, use a cooking term called, “amuse-bouche,” which means to “amuse the mouth” by providing a small sample to whet the palate.” Yep, I’m in!

Finally, a word of warning. Here is some advice good for cooking, but not so much for sex. It starts off well, with this advice: “To ’sear’ means to cook very quickly by intense heat, which develops flavors and improves appearance,” but it ends badly as, “but be advised that this method increases shrinkage.”