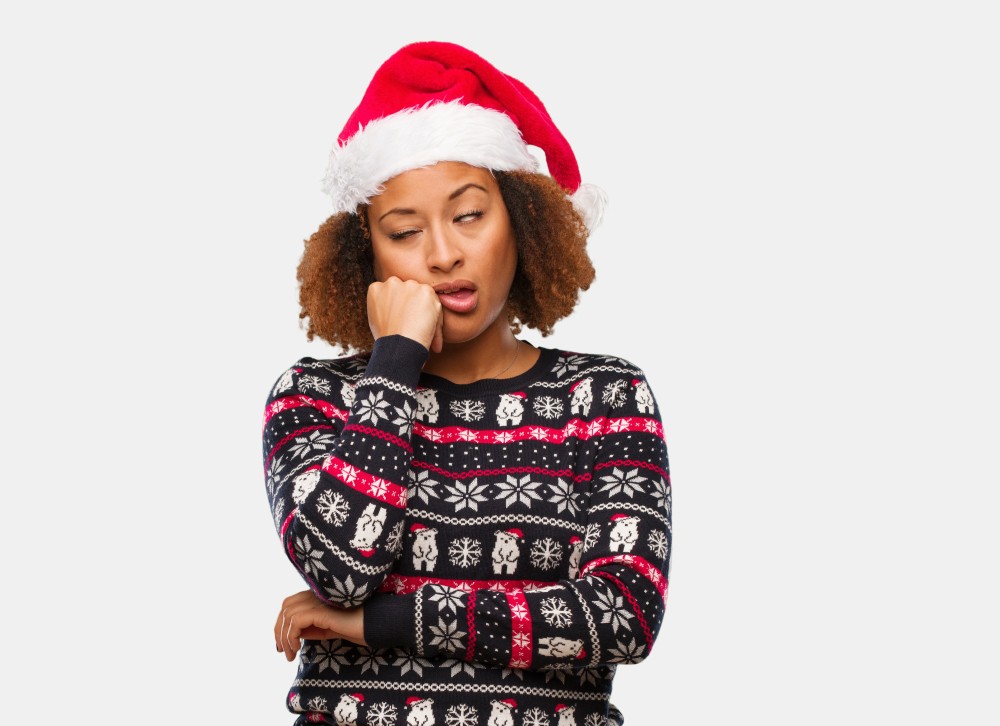 Welcome to the season of overindulgence. ‘Tis the season for too much… everything.. And for some reason, the bulk of the planning, orchestrating, and cleaning up after the holidays falls on the woman of the house. It’s as if the rest of the family thinks the wrapped gifts, the lavish decorations, the abundance of tantalizing holiday desserts just appear by magic. Well, I’m here to say my magic wand is out!

A few years ago, I staged a rebellion.

After the last of the children grew up and moved out, I realized that the thrill was gone. The passage of time had dulled my enthusiasm for the season. I just couldn’t put myself through the work of putting up twinkling lights along the eaves, baking gingersnap cookies, or blowing up an inflatable Santa by mouth. I was tired and I had a headache.

But these days, as my neighbors’ homes burst with holiday cheer, my only Christmas decorations consist of two small decorative wreaths fastened to the front and side doors of my house. I only do that because it amuses me when, as Christmas nears, my neighbors call across the yard, “Hey, Denise, have you decorated your knockers yet?” My neighbors try to shame me into compliance. One of them even strings lights among the antlers of her husband’s deer trophies on the dining room wall. It looks as if the poor deer was killed in the midst of his own holiday party. She also erects and decorates a themed tree in every room of the house. That’s eight trees! I think she may need therapy.

I can’t even be bothered to drag my sorry ass down the basement stairs to retrieve my one 30-year-old artificial Christmas tree. And it’s still wearing the same decorations it was wearing when I put it down there several years ago. It has a trash bag over it to keep the dust off it. Its twisted plastic bristles have gotten as shabby and bedraggled as a toilet brush tucked into a corner of a gas station restroom.

I would like to take this opportunity to respond to my friends’ and neighbors’ persistent whining about my lack of holiday spirit. Get off my back, Santa freaks!

I’m not a grinch. I’m taking a stand for overwhelmed women everywhere as I lie on the sofa at night in my sunglasses trying to block out the nearby houses that are lit so brightly you’d have to view them through a tiny hole in a square of cardboard as if it were an eclipse, or you could be blinded. One of the women on my block cannot decide whether to go with a religious or a secular theme. The manger’s roof is held up by candy canes, Baby Jesus’s bed is the back seat of Santa’s sleigh, and the three wise men are represented by Simon, Alvin, and Theodore singing that obnoxious Chipmunk Christmas Song. She thinks it’s festive. I think it’s a cry for help.

As I stand on the corner and look down my street, the rows of colorfully lit houses are strung together like twinkling stars in a celestial constellation. That is, until you come to my house, which is like a hole in Orion’s Belt, a leak in the Little Dipper, a giant galactic black hole so dense that it threatens to suck all the joy out of the neighborhood. Carolers refuse to climb the steps to my dark and gloomy porch lest they be sucked in a vortex of sadness and deposited in some parallel universe, where they will be doomed to spend eternity drifting though outer space like an astronaut whose umbilical tether has snapped. It would make it difficult to sing all those choruses of “It’s a Holly, Jolly Christmas.” The mood is kind of gone when you are floating off through space.

Why should I go to all the trouble and expense of a lavish temporary display when I can just pull the curtains open on my picture window and view my neighbors’ holiday extravaganzas any time I want? It’s a lot like living next door to someone who owns a swimming pool, or a boat, or a camper. You can live a full and enjoyable life if you are willing to suck up to a neighbor who will shoulder all the expense and the hassle.

With all the time I save by not doing any baking, decorating, cleaning, shopping, or wrapping, I can instead occupy my time and my mind by lying on the sofa trying to see how many dirty jokes I can come up with which have a punchline of “Chestnuts Roasting on an Open Fire,” I am up to six. Here is a hint: They all involve a main character named Chet. Punchline # 4 is especially funny. I would tell you what they are, but I am trying to get a head start of my New Year’s resolution to stop being the neighborhood curser.  I have already pushed the limit with the decorated knockers comment above

If you’re tired of shouldering all the responsibility for the magic of the holidays, take the advice of this grinchy feminist: Try doing nothing this year. It may be the most magical Christmas you’ve ever had.