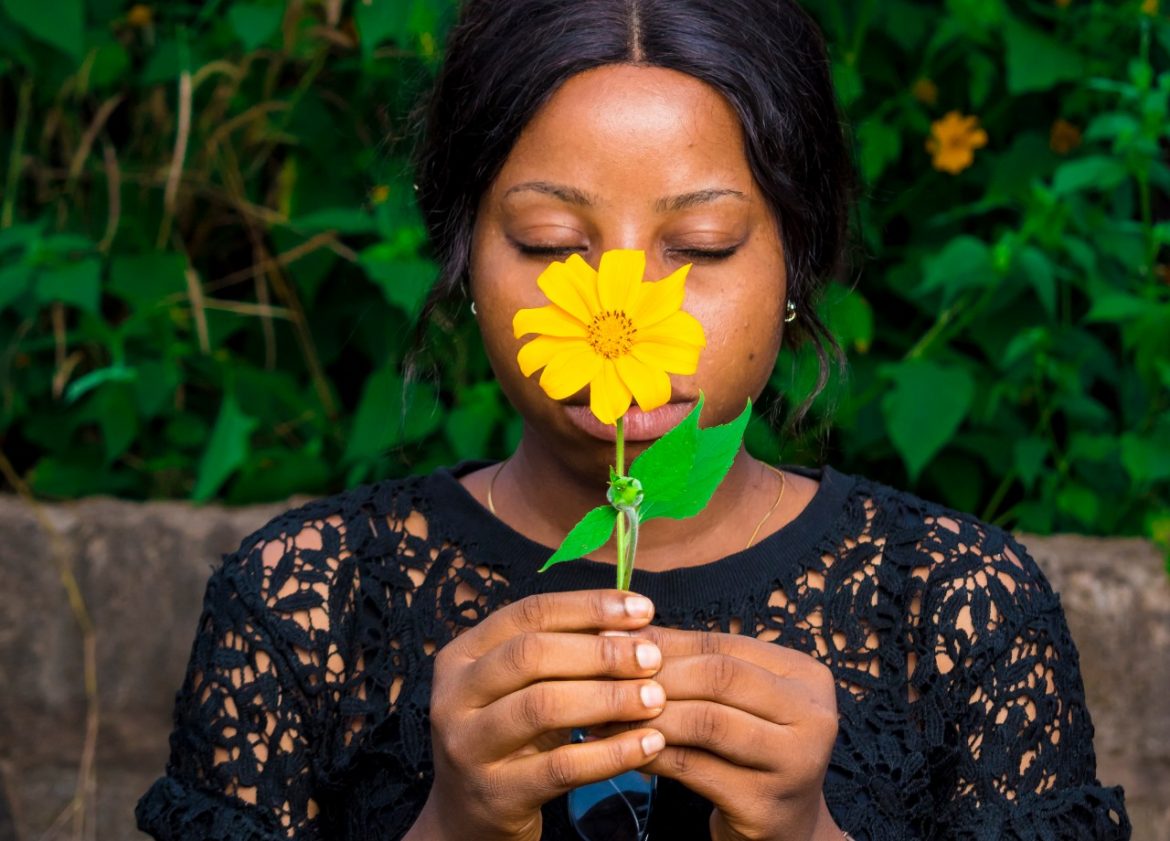 A marigold’s leaves are unlike the ones I doodle in notebook margins. They are not shaped like one big, rounded leaf with a pointy tip that droops almost curling under itself in shyness. Instead, its many leaves are wild and unrestricted in their growth and aspirations with edges like barbed wire. Watch as they get taller; the stems deepen into a fervent red. Anything left behind weakens under their shadows. No wonder in Toni Morrison’s “The Bluest Eye” and Eugenia Collier’s “Marigolds”,

the flower has become a symbol of hope for Black women and a lesson on false foundations.

In November of 2019, I planted some marigold seeds in a small-ish pot and kept it on the windowsill near my bed. Tending to them became an intimate practice in vulnerability. I’d never grown anything before so I was constantly fussing over them. Were they getting enough water? Enough food? Enough attention? Were they better inside protected from the cold or outside under direct sunlight? As they started to grow, I loved studying their development. I took pictures comparing how much they’d changed and predicted where they’d be by this or that date.

Perhaps Claudia and her sister, Frieda, from “The Bluest Eye” chose marigolds for the same reasons as I did. My little eden said about me what I was unable to convey in words. It spoke to my potential, perhaps, to be someone complete. Whole. Finished. But all at the same time. Hoping that some Pinterest-aesthetic-ideal would allow me to skip the growing pains of being a fresh twenty-something without a sense of self, in the same way someone might introduce their Hogwarts house or zodiac sign before their name. Attempting to revise any narratives of me that failed to reflect the ideal me, I showed them off to my friends as if to say,

Marigolds conjured memories of playing hide-and-seek in the bottom kitchen cabinets amongst the canned beans and greens and of setting the table for three as Sunday dinner sizzled over the gas stove. Of an unleashed, smelly German shepherd waiting on the front lawn to send me off to school. Of stumping on fallen leaves around the house to hear them crunch and to pretend as if I was trekking through some undiscovered terrain.

Of noticing the boxes of TLC fan club memorabilia in my closet and the discolored marks on the walls detailing the once little girls who’d lived there before me. Of the flowers that bloomed outside my bedroom window which made me pause and ask out loud, “Have those always been there?” Whenever I dream of a home, I dream of that one-story, faded black-and-white house with the marigolds growing along the walls.

I can see the two girls outside a home like mine planting a seed for their friend and her baby. The cold dirt pushing against their knobbly knees. Their heads bowed and palms pressed together as their mouths echo prayers heard in church. I can see them as they were then and as Claudia is now describing to me how they believed in their own magic:

“If we planted seeds, and said the right words over them, they would blossom, and everything would be alright.”

For all their defiance and resilience, marigolds make the perfect vessels for our hopes and perhaps by choosing these flowers, we believe that, like the marigolds, our hopes can withstand anything.

When I look up the word innocent, there are more definitions than I had anticipated. One can be faultless, free of wrongdoing in the context of a crime. One can be innocent in the sense that they are naive and harmless. There are also innocents, ones who are blameless victims of a crime or linked to a crime that they knew nothing about.

Overall, it is the lack of knowledge that is emphasized. For girls like the characters in those stories, and especially myself when I was a child, they simply did not know that the earth could work against them and it was a lesson they had to learn quickly if they were to survive.

Innocence is a luxury that Black girls are often not granted.

None of my marigolds had gotten the chance to blossom before they died. It was too late for them when I brought them home to my dad over winter break. I jokingly sent my friends pictures of my wilting flowers in front of a hospital sign to hide my growing concern and captioned it, “Taking her to the hospital, gonna see if they can make her better.” Later the picture was of my flowers laying spread out on a trash bin lid with the caption changed to: Kill Your Darlings.

Marigolds growing along the walls of my old home may be a misremembering. The details of that house are steady shifting and changing in my mind, reflecting how I feel instead of the facts. The flowers along the wall very well could have been hydrangeas or tulips or roses. That house exists in my mind as a happy place which is probably why I dream about it so often.

I lived in that house for almost two decades, yet I hadn’t noticed the flowers growing outside my own bedroom window until we were getting ready to move and the grass needed to be cut, hedges trimmed, and flowers uprooted. I haven’t lived anywhere for that long since.

I had never questioned the ground beneath my feet or stopped to ask what if.

What if I had built my garden upon barren soil? Or in a small, compromising pot handed to me? Just because this is the foundation given to me does not mean I had to accept it or try to make it work. I’ll remember the year my marigolds failed to bloom.

Only in retrospect do I understand what they were trying to teach me, the year that they were trying to prepare me for. To know that my hope cannot be placed in systems predicated on my own suffering. To disentangle my hope from new presidents, vaccines, and historical firsts that tell us to celebrate when forty acres produces one bud.

And so, I will be searching constantly for land like that outside my old bedroom, one in which to grow my marigolds.