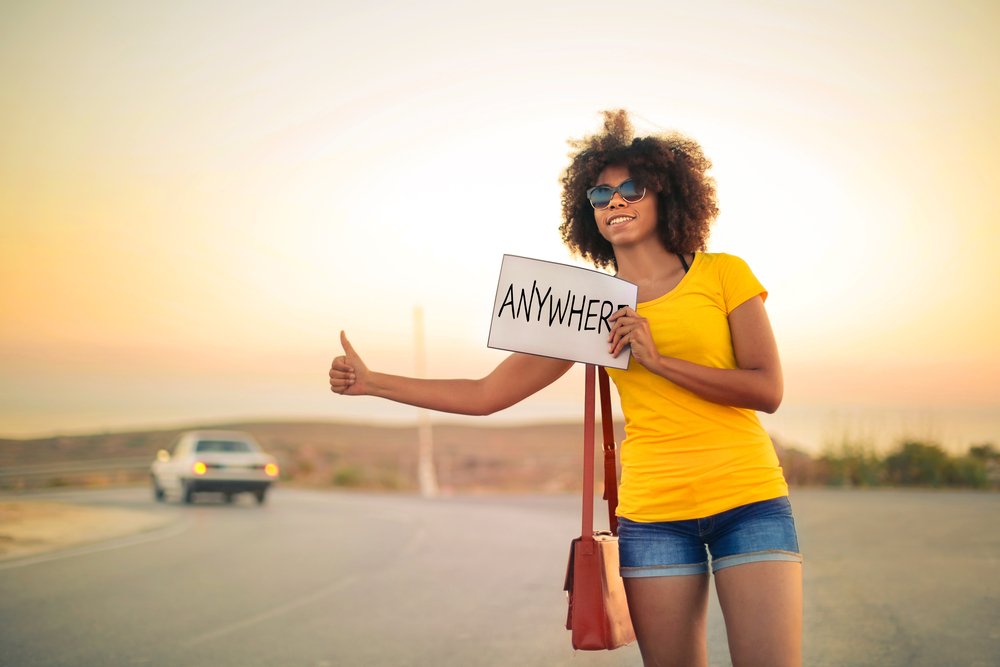 Women aren’t supposed to hitchhike. It’s too foolish and risky.

The first time I hitched, I was in the fourth grade. I stood out on my front lawn and thrust out my thumb. It was something I’d learned from an episode of The Mod Squad (go ahead, Google it. I’ll wait…) I hitched all the way to my best friend Sue’s house two blocks away. Okay, so it was my dad who gave me the lift. But in my mind, I was hip. I was cool. I was and independent woman of the ‘70s.

The second time I hitched, in the early ‘80s, I made it a little further. I was riding the bus to work in Houston when it broke down in the middle of one of the busiest freeways in the city. The 59 other passengers and I had three choices: sit in the bus and wait three to four hours in the heat for another bus to make its way through the traffic, hitchhike, or rappel down the side of the overpass using pantyhose and high heels as makeshift mountaineering equipment.

I was wearing neither pantyhose nor high heels (such a rebel I was), so I opted for sticking out the old thumb. I ended up getting a ride with a deputy sheriff who regaled me with graphic tales of the unpleasant ends female hitchhikers often come to as he fiddled with the gun in his holster.

Needless to say, both of my hitching experiences have stuck with me and nowadays, I tend to either use my own transportation or just stay home and watch the Weather Channel. “See, it’s raining in Iowa, so there’s no point going there…”

The main reason I’ve given up hitchhiking is fear of rejection.

I just know I’d be standing out there with my cardboard sign that says, “Not a criminal” and the guy across the highway with a machete would get picked up first. That’s the way it’s always been. Softball teams, proms… the guy with the machete was always beating me out.

But before you head out on the highway, let me give you a few tips. After all, I have experience.