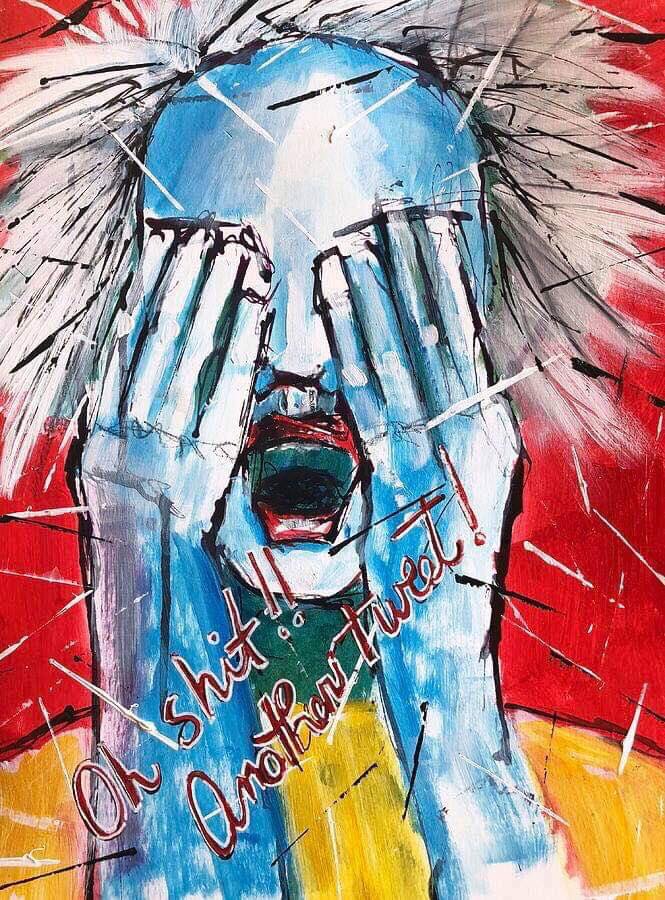 We women often struggle to claim our talent, to exclaim to the world that what we do is worthy. That was me until five years ago.

If someone had said to me back then that paint would change my life, I would have laughed as hard as if they’d said, eating carrots will straighten your hair. (I tried the latter. It didn’t work.)

But painting has changed my life.

I was coming up on retirement when a friend suggested I take an online learn-to-paint class. She had me at “online.”

You see, I’m a lousy student (and I’m claiming that talent!). If I sit too long, I want to strangle my nearest classmate. Listening to experts yammer on about any topic sends me into a worn-out grizzly bear state of hibernation. Also, I don’t like order. I like to skip stuff, especially if it’s boring. And I don’t like the teacher spending time with other students.

Then there’s the fact that the last two times I took classes in person, I ended up hospitalized. At the first one, on my way to lunch, I tripped and fell, sliced open my hand and required ten stitches. Said hand then got infected and I almost had to have it amputated. I didn’t. But I could have.

Again at lunch at the second class, I slammed the bathroom door on my wrist causing profuse bleeding that wouldn’t stop, necessitating a trip to the local urgent care facility where I was told that  I needed to go to the ER because they didn’t trust themselves dealing with a wrist swollen to the size of a watermelon.

Maybe, now that I think about it, the problem isn’t in-person classes, it’s going to lunch.

The online class my friend suggested was a year-long series with a different teacher each week and it didn’t matter if you missed a class because you weren’t into that week’s subject matter (or for that matter, your cat died or you didn’t want to rob a bank in order to buy the week’s art supplies). You could replay the videos a thousand times for the rest of your life. No one needed to see your crappy work or the ugly stages it would inevitably go through on its way to becoming a piece of art that would make the Mona Lisa truly smile.

That sounded perfect to me. The only issue was the word, “art.”

I may be the only eight-year-old kid ever fired by the school art teacher. We had been told to draw a turtle. I drew a house and a rainbow and my brother throwing up and our dog up a tree and my mother and father fighting. In my defense, I do believe there was a turtle in there somewhere. But my teacher didn’t buy it.

She told me art was not my thing. And for more than sixty years, I accepted her statement as truth.  I came to believe that people were either born artistic or  they weren’t and I was not.

However, curious about the online aspect and thinking it was an inexpensive way to maybe show that stupid art teacher who said I couldn’t do art!, I signed up.

I was stunned when the very first painting I did actually looked like a human being! Sure, the eyes were off, she had nostrils the size of Canada and the mouth was one I wouldn’t wish on an anteater.

But you could tell it was a person, a woman actually. Not a nebulous what-the-heck-is-that-let’s-turn-it-upside-down-and-see-if-I-get-it kind of woman either. I was ecstatic and I was hooked.

The weeks, then months, sped by as I churned out painting after painting like some kind of machine.

That was the problem.

I was turning out a painting a day, sometimes (hard to admit), three. I gave as many as I could to friends and family until the ones with boundaries said, “Stop!” and the ones without didn’t return my messages.

I joined a Facebook group called Art Abandonment and started leaving paintings in parks and ladies’ rooms for people to find, but those who picked them up rarely contacted me (I included my  email address  with the paintings in case anyone wanted to reach me). For all I knew, they were using my art to line their birdcages.

After about eight months and with my paintings covering too many surfaces (at least they covered the dust), I figured I’d expand my base and try giving away the paintings online. By then I had started adding words to the pieces. At the beginning they were old quotes, (I didn’t want to have to pay anyone to use them), but after a few months, I began adding my own thoughts.

I had absolutely no idea whether anyone would want the play (Don’t ever call what I do “work!) of an eight-month-old artist. And if they did want them, would they be willing to pay?

I had no interest in running a business, so I came up with the idea of asking for a donation to a charity of the buyer’s choice. Because I wanted everyone to be able to afford a painting, I initially asked for a minimum contribution of $10 to go directly to any charity. (I’ve since raised the minimum contribution to $25.)

For close to five years, almost every day, I have given away a painting—more than a thousand altogether.

The outpouring of emotion from buyers, to say nothing of the amount of contributions (approaching $50,000), has astonished and moved me. Some of the notes I receive from people have me crying like I did when that art teacher told me I was essentially a talentless nobody who would never amount to anything (that’s how I heard it anyway).

But my tears are happy ones. I am doing something meaningful, inspiring even, that delights other people, sometimes makes them smile, that serves the greater good through the donations. I play as much as I want on our dining room table surrounded by enough painting paraphernalia to outfit an art school. No one tells me what to paint or criticizes me or says I’m not an artist.

I know I am. I’m claiming my talent.