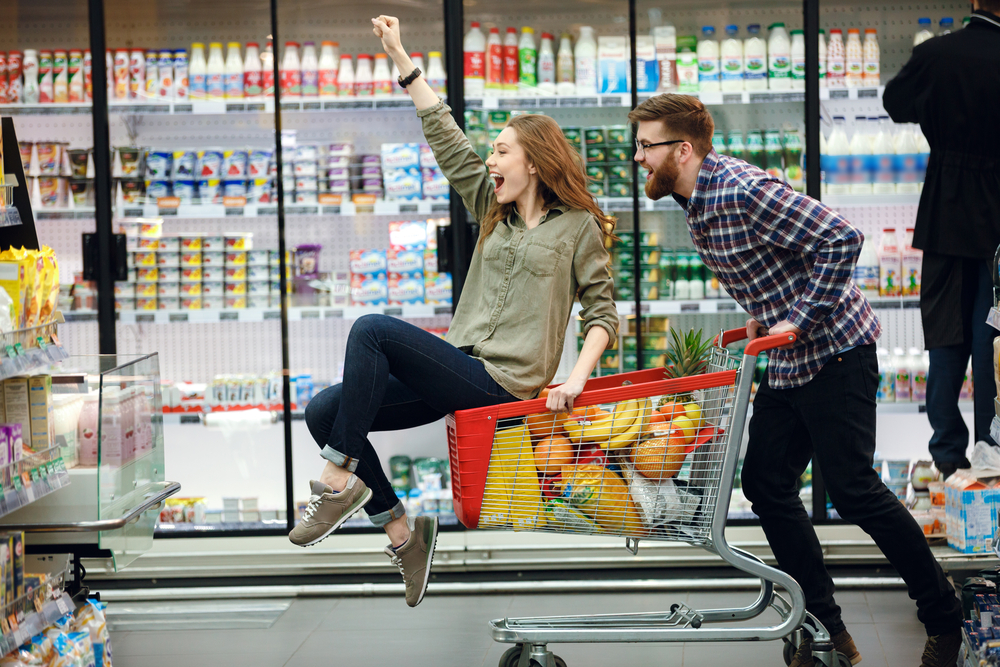 I looked out through the passenger-side window at a man holding the handles of a large wet bag of KFC, standing at the corner crosswalk, seemingly indifferent to the soggy November rain as he waited for the light to change from under his Columbia jacket.

“Do you really want this…” my husband asked as he turned our car into the Ballard Market parking lot.

“We’ve come too far to give up now. There has to be at least one left in this town,” I replied.

We both started looking left and right, combining our powers to successfully summon a parking spot close enough to the door to spare my husband and his favorite flannel shirt from the rain.

“This is ridiculous,” my husband mumbled before running between displays of pomegranates and Christmas wreaths by the front door.

“Get the ham!” I yelled after him, though I’m sure his mission was well understood.

This was the 3rd hippy-dippy Seattle grocery store we visited that Sunday afternoon, and our goal to try one of the new plant-based hams the Tofurky company had just released, was starting to look hopeless. We had spotted them in a huge frozen display at Whole Foods only two weeks before, and being a fan of their gravy, we were both excited to give it a try. Unfortunately for our Sunday, we missed our chance to grab one as we had grossly underestimated their popularity before Thanksgiving. That once tall display of hams had been decimated by the time we had gotten around to our holiday shopping.

“They’re all out too,” my soggy husband exclaimed as he climbed back in the car.

“Gaaaah!” I yelled. “This isn’t ridiculous, it’s insane! Where the hell are all these vegetarians and vegans hiding in this town?! And why did they all come out of the woodwork to hoard all the hams?!”

“There’s a Whole Foods in Queen Anne we haven’t tried,” my husband calmly suggested. “Maybe we’ll get lucky because it’s out of the way.”

As we started to drive towards our fourth, and final, grocery stop, I thought aloud, “If they don’t have it, I’m checking eBay next.”

Was racing around in the rain going to be worth a sodium-rich football of processed wheat-gluten and soybeans? Probably not, but it was the principle dammit.

I love that there are companies out there that understand that being a vegetarian or vegan does not mean you have to give up having a protein centerpiece for your holiday meal. As a kid, turkey was never my favorite thing on the table anyways, and my plate was mostly dominated by mountains of mashed potatoes crowned with gravy and sweet rolls. Everyone has their favorites, like the green bean casserole, or your aunt’s “cheese thing” that was never properly named, but is much anticipated by all every year.

Whether turkey is your favorite dish or not, it’s always a proud moment when it’s taken out of the oven, un-singed, and it’s always given a proper place on the table. For most households, this is the only time of the year when a whole bird is roasted, so it’s something to be respected and looked forward to, and as vegetarians, we long for that same sense of tradition. Being a vegetarian or a vegan often means you will be looked over by your family’s menu planning, and your personal cuisine choices will inevitably become the dinner topic of conversation to amuse those same relatives as their means to avoid talking politics.

Making fun of vegetarians is always bi-partisan. Companies like Tofurky understand we’ve been resigned to a life of side-dishes and try to give a sliver of that tradition back to us in such forms as “Holiday Loaf” or “Celebration Roast.” I’ll always be first in line to give them my money.

“I got it! They had two left, and I got one!” My husband exclaimed proudly from the driver’s seat in the Whole Foods parking lot.

Our mission had been fruitful, a true Thanksgiving miracle, and we went home to roast our prize. We preheated our oven to 325, whipped out the Pyrex, and removed the fake ham twine with scissors. Easiest prep ever. One hour later, our roast was done, and we took the ham into our living room to enjoy it with last night’s SNL episode.

I took one steaming bite of the ham, grimaced, and said, “There’s no way I’m serving this to anyone at Thanksgiving.”