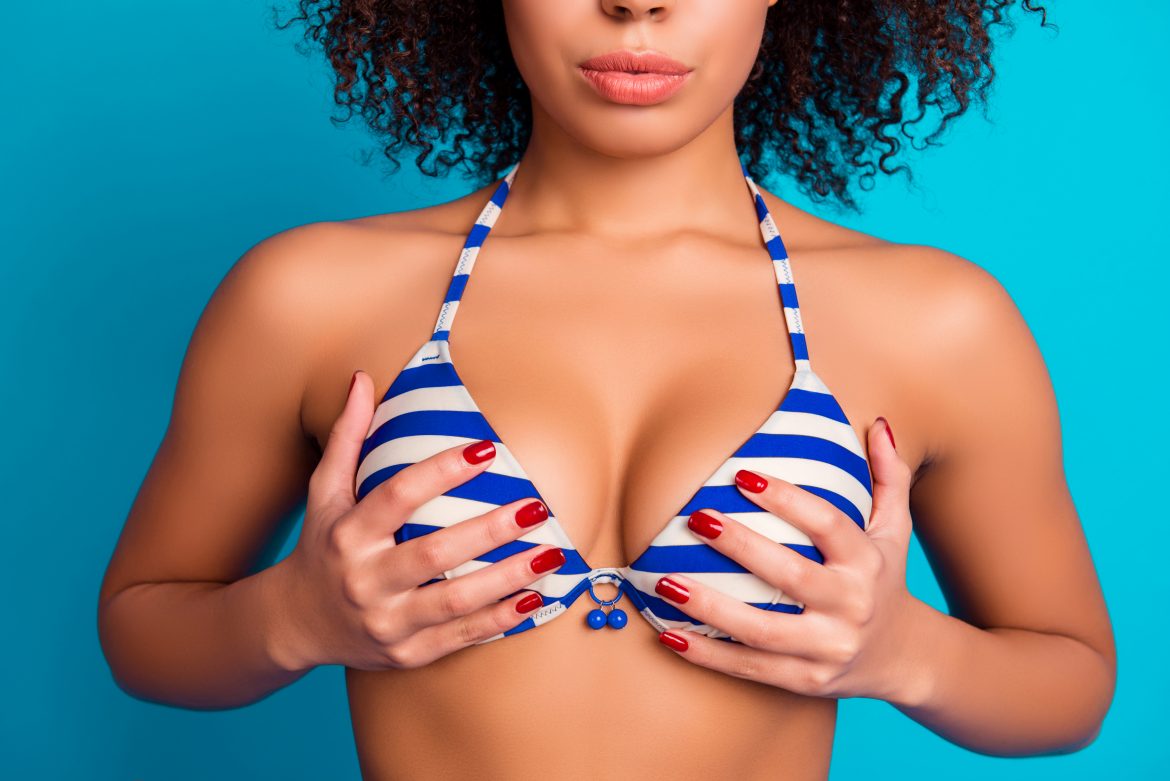 Why I Hate And Love My Boobs

“The thing you have to remember is don’t let go,” the instructor said.

I felt like I could handle that, at least. The boat revved forward, pulling us along behind.

Annie, my cousin, was the athletic type. She quickly pulled herself up onto her wakeboard, and swooped over to one side to give me room.

Okay, I thought. Time to somehow do what she just did.  I propped myself up on my elbows, but a rush of heavy water smothered me. I got a face full of sludge and the board was shoved under and away.

Crap, I thought as the boat began gathering speed. Just keep hanging on.

I got dragged halfway around the lake on my face.

Sinuses full of algae and seaweed, I let myself go cartwheeling into the depths. The boat looped around to pick me up, and I shakily climbed aboard. I was numb all over my torso and forearms from getting pummeled by the water’s surface.

Unfortunately for me, the bathing suit I was wearing had gotten unzipped while I was being dragged. My pre-teen boobs came tumbling out, in front of my uncle and his friends.

My mom tackled me with a towel, but I was mortified. With neon-pink cheeks, I drifted through the rest of the day’s activities, avoiding everyone’s gaze and keeping to myself.

I was an early bloomer. What I mean is, by twelve, I already had huge friggan knockers.

Overnight, I went from an Elmo training bra to bras so huge and shapeless they resembled two pillow cases held together with duct tape.

Later that year, I was playing volleyball in gym class, and my overburdened bra snapped, sending my bazookas flying into what might have been a game-winning spike if I had just been cool enough to roll with it. Instead I ran screaming to the locker room to try to MacGyver my bra back into working condition with some gum and a paperclip. It did not work out.

In sex-ed class, things only got weirder.

“This is what a woman’s breast looks like,” my teacher said, showing diagrams of dainty B-cups with perfectly circular shapes and high, perky nipples.

My boobs had appeared on me like a pair of aggressive butterball turkeys and looked nothing like what I was being shown. When will my boobs look like the diagram? I wondered. Do the nipples move, or something?

“Where do they keep coming from?” My mother moaned as I outgrew the bras she loaned me. “Why won’t they stop growing?!

“You must have gotten your boob genes from your father, because this sure isn’t coming from me!”

At the first dance I was allowed to go to, one of the guys in my hot friend’s orbit came over to ask me to dance. He had yet to hit his growth spurt, but I still thought he was cool.

The other guys cheered and high-fived him when the song was over.

“Wow, I didn’t know they would think it was so cool to dance with me,” I said.

My hot friend rolled her eyes. “They dared him to so he could stick his face in your nip-nips. He’s still at eye-level with those things.”

I was awkward around short guys after that.

While the other girls learned about makeup and fashion, I managed my insecurity by telling myself no one would notice my huge nose or my freckly face if I just covered it up whenever anyone looked at me. At the time, I thought I was outwitting Junior High pretty effectively. (I am not making this up.)

This illusion was shattered one day when I walked past a couple of the boys in my home room. They were gossiping about a kid who had shot up six inches, and about a hundred pounds.

“Jesse’s man-boobs are as big as Erika’s girl-boobs,” one of them said.

Crap, I thought. The boys noticed that I had boobs? How?! Jesse and I had always been on good terms, but after that, he stopped standing next to me.

“Mom, I like this dress,” I said, pointing to a maxi-dress with an empire waist and a sexy halter top. The dress was designed for rationally sized tatas, and offered a pair of triangle-shaped patches of fabric to corral them. They even had a handy insert to help you ‘fill them out’.

I tried anyway. The waistband sat directly over the nipples of my bangers, turning what was two into, well, four.

“IT IS GIVING ME AN UDDER!” I screamed.

“Guys come in two flavours,” my best friend in high school told me. “Ones that like skinny girls, and ones that love the hourglass. I’ll be the skinny one, you be the T and A. We’ll be a powerhouse.”

I looked down to admire my endowments. One tit was spattered with soup from lunch. It wasn’t even my soup.

I tried to pretty myself up before going out with her. In stretching to cut my toenails, I got one of my knockers trapped in my armpit and winded myself trying to get it out.

“Ladies, bras should support everything you have,” the radio said. “I’m a woman. I know what it’s like to be insecure about your body. I design a comfortable, affordable bra that will support your breasts properly. It will make you sexy. It will make you confident. I sell in all sizes. From A through to D.”

But over the years, I learned that to focus on the advantages of my sizable boobs.

My boobs could catch anything I dropped.

They could double as a chin rest if I got sleepy. If I got into a car wreck, I had built-in air bags. If I got shoved into a lake, easy flotation.

But if I tried to run, I would get a fat lip.

I never need a purse because I have money, ID, keys, phone, lipstick, and a pup-tent stashed in my cleavage. They can pat me down at the airport or at a bar and never find anything. It’s like the Bermuda Triangle in there.

And once, a strange girl in the club washroom said to me. “You look like a movie star.”

My boobs and I still remember that day.