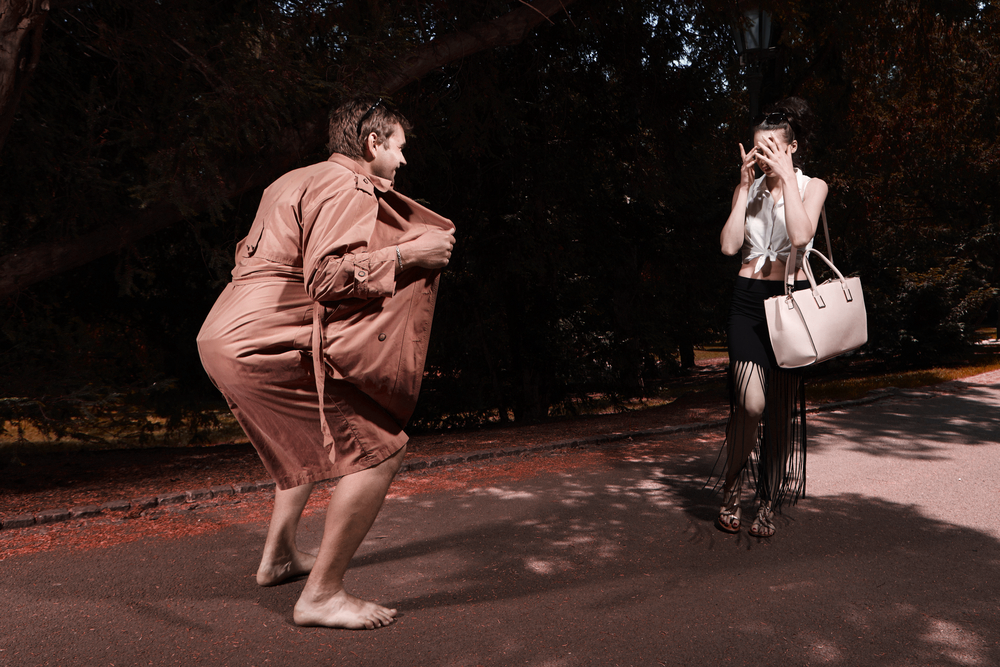 They Call Him the Forest Flasher

I’m a hiker. After 30 years of hiking, I thought I had seen everything, until I saw the man with no pants. Yep, a forest flasher… in a public park.

I stepped off the wooded trail and there he stood across the parking lot, when suddenly he unzipped and “released the beast.”

Hey! Is that for real? That cannot possibly be real!

No wonder he wanted to show it off. If that man is not in the adult movie business, he is seriously missing his calling. He could be a pole dancer and bring his own pole. There is no way he could ever wear shorts and “go commando.” Not even Bermudas; the kind that come all the way to the knees.

He took off running. He could run really fast for somebody DRAGGING AN ANCHOR!
It probably had road rash. As he ran, it picked up bark chips and pieces of weeds and wildflowers from the trail. It was starting to look like a third grader’s craft project.

I left a note for the park ranger and headed home. Someone from the park service called me before I even got home.

It seems that it was not the guy’s first offense and they had been trying to catch him. As I said before… fast runner.

The park service guy asked, “Can you describe the perpetrator? What was he wearing?”

“What was he wearing?! No pants, that’s what he was wearing! I believe I mentioned that in the note.”

“No,” he said, “I mean was there anything unusual about him?”

“Unusual? Well, I suspect there was something REAL unusual about him, but I married my first boyfriend at age 19, so what do I know? I should have shopped around more.”

“I think I know what you are implying, Ma’am. Could you describe…you know…his organ?” he asked.

“His organ? Gee I have never been inside the man’s house, but he did not seem like the musical type. You can’t always tell, though. He could be a real virtuoso on the piano or organ in his own home, although I don’t know what that has to do with his flashing in the park practices. If I were to guess what brand of organ, I would have to say the Baldwin brand. That’s really the only brand of organ I know.

What’s that? You did not mean that kind of organ? Forget what I said about the Baldwin, then. What that guy was showing at the park was no ‘bald-one,’ if get my drift. Heh-heh. Looked like he was smuggling squirrels out of the park. Somebody should tell that guy about ‘manscaping.’ Walgreens sells depilatories in aisle six. Get the Weed-eater out, Sasquatch. Hello? Mr. Ranger? Hello?”

I believe he has hung up on me. That happens to me a lot.