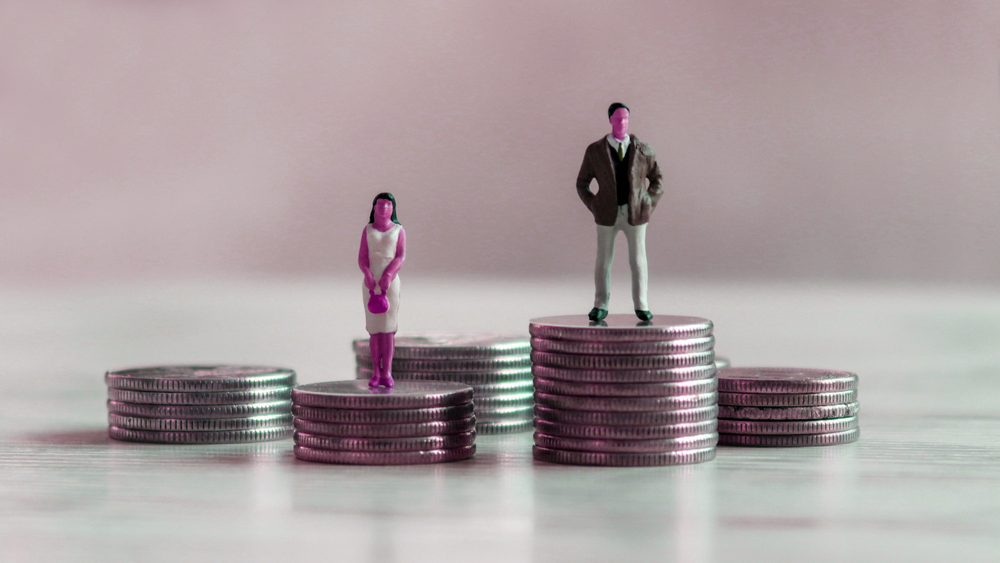 Gender Wage Gap at Work: Dude, Give Me My Half-Million Dollars!

Some man owes me $517, 248. I don’t care what man signs the check or deposits money in my PayPal account, but I absolutely will not take my payment in Bitcoin. What am I, a wizard?

I’ve been working full time since 1978 and wondered just how much money I’ve been screwed out of due to the fact that I have an innie rather than an outie, so I looked it up online.

I should have drunk heavily beforehand or at least binge-watched Game of Thrones until my brain was numb, but no, I waded into the math completely sober. Do NOT try this at home. In fact, before you type PayEquity.org into your search engine, have at least a half bottle of tequila on your desk. Shot glasses are optional.

Let me make it clear that I did not take a shortcut and average the amount due me based upon my years of working. No! I got out my calculator and added the amount for each year up.

One of my dogs was on my lap as I did so and he did not appreciate the cursing as I stabbed at the digits, getting angrier as the amount exceeded 300,000 then 400,000, then half a MILLION DOLLARS!

What the hell? It didn’t help that the entire time I was practicing math, I reminded myself that the wage difference would be much worse if I were a woman of color. I’m not sure there would be enough alcohol at my local liquor store, Larry’s Drunken Dreams and Fidget Spinners, to calm me down.

It was made clear to me in my very first job as an economic analyst at a major banking firm that the fact that I didn’t have an Adam’s apple made it acceptable for my boss to underpay me. The young man hired to do the same job as me, with the same level of experience (none; we were both fresh out of college), and with a lower GPA, earned $5,000 more than I did.

I discovered this because I’ve always been a nosy broad and I asked him what he was getting paid as a way to shut down his sexual advances. When I asked my boss why, let’s just call him The Overpaid Idiot, got so much more money, he explained, “He might have a family to support someday.” This despite the fact that the Idiot, who was single while I was married, spent all his free time carousing like the frat boy he’d been for the previous four years.

Fast forward 35 years. I’m mentoring a man about my age who wants to quit his “real” job and become a motivational speaker and author, as I have been for a quarter century. I share with him all my best tips over dinner. He seems appreciative and springs for the $9.95 for my meal (I’ve always been a cheap date, both professionally and personally.).

Two years later, I am hired for a speaking job my mentee did the previous year and after I agree to the company’s financial offer, someone lets it slip that he earned twice as much. ‘Cuz a little extra testosterone trumps years’ worth of estrogen-experience, I’m guessing.

So here I am. I’ve been in gainfully employed, albeit weirdly, for the past 40 years. I’ve been an economic analyst, a research associate, a wellness program director, a university instructor, an author, a speaker, and a stand-up comic. And in every case, some male version of me has been stealing my money.

It’s like a parallel universe where everyone is a dude and their pockets are brimming with cash. Not to mention the fact that they HAVE pockets!

Not only underpaid, a woman can’t even get pockets in her clothing!

I want my damned money back, but I am under no illusion that anyone is going to pony up my half mil. So, I’m taking matters into my own hands. I’m putting together a group of women to plan elaborate heists, ala Ocean’s Eight. We’re going to steal from the very rich and divide the spoils among women everywhere until we even the score.

They say crime doesn’t pay, but neither does being a woman, so I’m ready to give it a go. And if worst comes to worst and I end up needing bail money, I’m calling a dude.