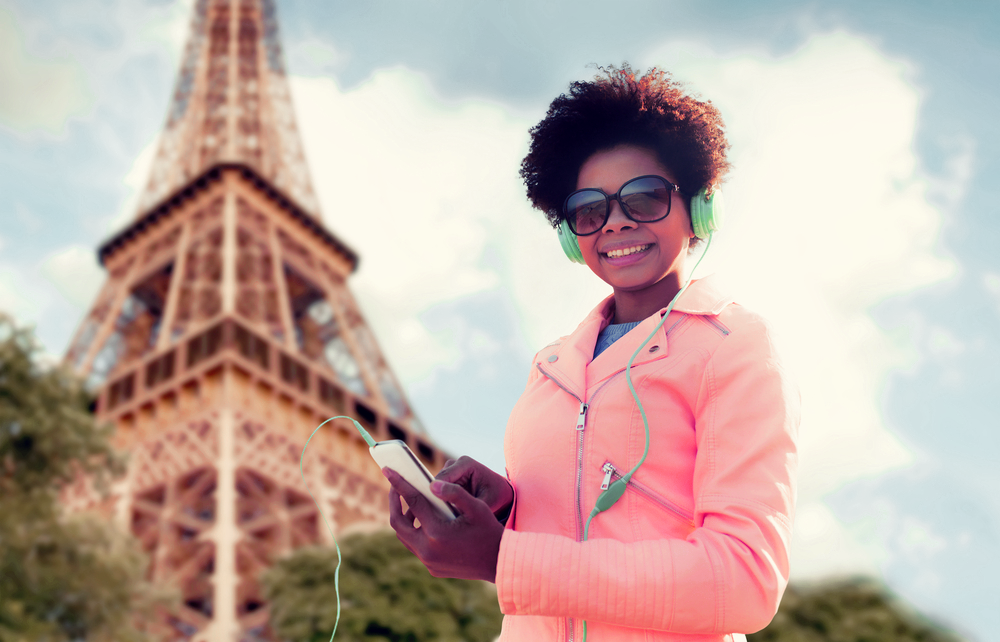 There are 20 students in my intermediate class, with twelve different native languages all trying to learn French. The word ‘Maladroit’ was used in a sentence and someone asked for the definition. The professor began to mime having difficultly holding a bottle of water and responded with “Ne pas être habite de ses mains.” which translates to ‘to not live with your hands’, as if that cleared everything up.

We all stared at her confused as she exclaimed “Je suis tombé” while continuing to fumble with her water and pretending to fall. One of the only other Americaines in the class tried to clarify by throwing out the term ‘butterfingers’ but in French so “doigts de beurre” or ‘fingers of butter’, which pushed the multi-multi-cultural class into a confusion tailspin. Even the professor couldn’t follow why les Americaines were cracking up over this inexplicable word choice. Fishing for any intelligible explanation someone shouted out ‘Le Parkinson’s?’ Needless to say, I have such a renewed respect for the United Nations; this hilarious back in forth argument continued for a good 10 minutes until we finally threw our mains up and moved on.

My phonétiques class is the worst thing that’s ever happened to me. For three hours a beautiful native speaker’s voice enunciates useful phrases like ‘L’homme est assis, la femme aussi.” (The man is sitting; the woman is also) and I then repeat said phrase. Having my slurred horrendous French recorded through headphones and then against my will, having to listen to the replay of me butchering this beautiful language is torture. It’s like hearing an exquisite rendition of Beethoven’s Moonlight Sonata on the piano and then having to replicate the song with a cowbell. As if I didn’t already know my pronunciation was unbearable, I had to relive it on repeat. It may not seem too heartbreaking to some but imagine having to watch a supermodel doing jumping-jacks in a bikini then having to record yourself doing the same, then being forced to watch the two side-by-side. Mon Dieu!

It was my friend Logan’s birthday on Monday, so I picked him up un petit gâteau à la pâtisserie. I wasn’t paying any attention as to my whereabouts until I had been wandering around for an hour and realized I was nowhere near our building. I thought – alors, c’est la vie – I was in France, prancing around with a ribbon in my hair, a bag of fresh fruits du marché, une baguette à la boulangerie, and Logan’s birthday cake. I was on a high and mentally patting myself on the back for assimilating so well into the French culture – when I tripped (on nothing in particular, how very Maladroit of me) and fell hard, throwing all of my parcels onto the sidewalk. No less than 50 people witnessed me crashing to the ground, ripping my brand new (beautiful ivy patterned) tights at the knees and had blood running down my shins. A couple people stopped to help me pick everything up, but I was so humiliated I just mumbled merci and bolted down the street.

Tellement embarrassant! I felt a lot like Carrie Bradshaw in the American Girl in Paris episode of Sex and the City where she face plants, but felt some relief knowing at least I wasn’t in a Parisian Dior Boutique.

Not to sound like a narcissist but I’m six feet tall so people tend to notice me when I walk by, but this was exponentially worse. It looked like a scene from a cautionary Lifetime movie: my dress was crumpled and dirty, my hair was a mess, and my exposed bludgeoned knees alluded to only god knows what. I was completely lost so to escape the passerby’s’ stares I walked into a random clothing store and murmured “Je suis tombé” and asked to use their bathroom.

Two very kind French men took one look at the state of me, and quickly led me through a door and down a sketchy staircase into their backroom. I momentarily thought this seemed like a scene out of Taken and assumed this was where I’d be sold into white slavery; but I didn’t care at this point because they had helped me into a chair, gave me a bottle of water (sans roofies), and began to extract the shards of cement lodged into my kneecaps.

My adrenaline had been pumping and it really didn’t hurt; but nevertheless, because I had hit every emotion on the scale in the prior ten minutes from euphoria/humiliation/panic/stress/relief/gratefulness I just started hysterically crying. They were both very sweet and kept saying – “Non, joile fille, ne pleure pas, s’il vous plait.” as they took turns further ripping my tights trying to make room for enough Band-Aids, I was trying to remember when the last time I shaved my legs was (PS – I was okay on that front).

They calmed me down and offered me une tasse de café and were very patient as I repeated “je suis vraiment désolé” in between explaining what had happened in sobbing French. Because I was so grateful they had helped me transition from streetwalker to something that somewhat resembled my prior condition, I bought the first sweater I saw, without bothering to look at the size in thanks (Yes Mom, it was on clearance.)

Walking has been an interesting experience the last few days, it was touch and go for a while, but it’s looking like I won’t need to amputate.

Not the Best Way to Find Out You...

Imposter Syndrome: Why Don’t I Have a Stalker?

Trigger Warning: You Are About to Hear from...