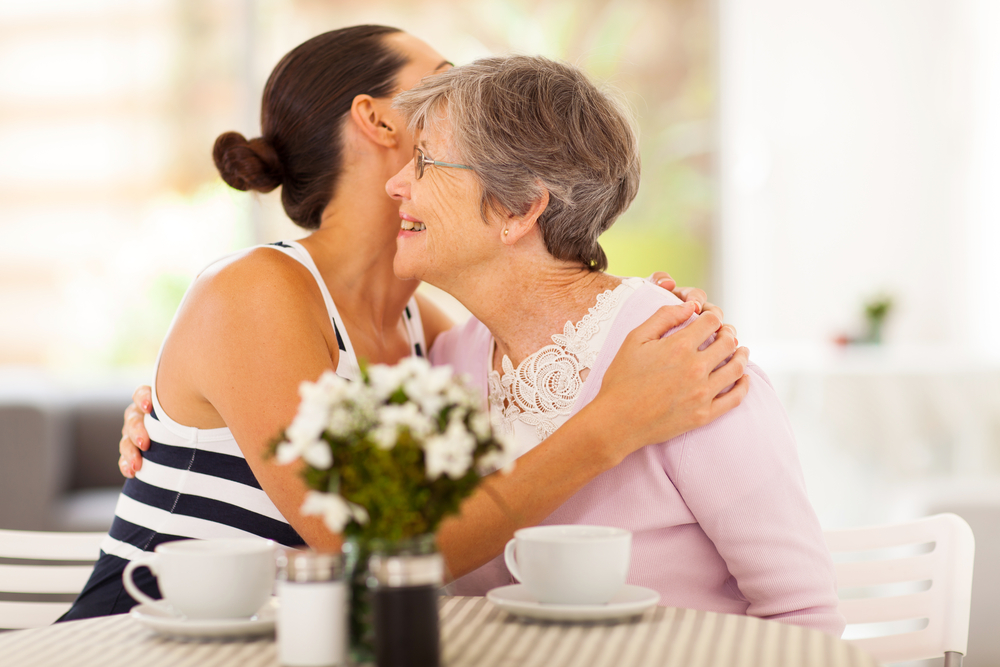 My First Mother’s Day Without My Mom

written by Denise Thiery May 14, 2019
FacebookTwitterPinterestEmail

My mom died last week, just 10 days before Mother’s Day. This is my first Mother’s Day as an orphan. I am in my 60s, but that’s the way it feels. You’re never ready to lose your mom.

In her last few years, Mom suffered from Alzheimers. She didn’t always recognize her children. The mom I knew from my childhood, the strong, caring, competent mom, had gradually faded away, so in that sense, I’d lost her already. Flashes of her former personality occasionally popped up like the first crocus of spring, and faded just as quickly.

Mom had an odd obsession with paint. She believed that nothing perked up a room or a piece of furniture like a fresh coat of paint. Money was scarce, so she used whatever paint was on the clearance or return table at the local hardware store. That might explain why we had a pink piano, a purple sewing machine, an aqua refrigerator, and a purple sidewalk.

While painting ceilings, she always wore a pair of white cotton men’s briefs on her head to keep the paint out of her hair. She claimed that my younger brother’s size six briefs were just the right size.

She couldn’t have used my underwear, except as a drop cloth for the sofa. She read somewhere that underwear that was a couple of sizes too big would last longer, thus saving money, so she bought my underwear so huge that 34 silkworms died of exhaustion in its manufacture. I could have pinned the leg holes together and used them as parachutes.

I dreaded gym class when calisthenics was scheduled. Jumping jacks are a risky business when you are wearing bloomers the size of revival tents.

I sometimes came home from high school to find Mom perched on a kitchen chair, painting, wearing Dad’s old clothes and a pair of white Fruit-of-the-Looms on her head. Tufts of hair, flecked with paint, poked out of the leg holes (a disadvantage she obviously had not thought of), making her look slightly startled. Her face and arms glistened with Vaseline, because she had read somewhere that it would keep the paint from sticking to her skin.

She sang at the top of her lungs while painting, even though she couldn’t carry a tune. Usually she was singing “Look at me; I’m as helpless as a kitten up a tree” in an off-key falsetto. The “less” in the word “helpless” shrieked like fingernails on a chalkboard and was capable of breaking a lens in my eyeglasses.

As a teenager, I seldom brought friends home, because I was embarrassed. Nobody else’s mom acted quite like my mom.

Not just because of the paint thing, either. She and my dad were openly affectionate and had a hard time keeping their hands off each other. They never passed in the hall without sharing a quick kiss, a whispered message that made my mom giggle, or a pat on the fanny. Often she was the one doing the patting.

They often sat close and cuddly on the couch, whispering and laughing.

Once I asked her, “Geez, Mom, why are you always playing with Dad’s ear?” She laughed and answered, “Well, what else can I play with in front of the kids?”

I recall being a little jealous of their open affection. Even though she was a wonderful mom to her five kids, I suspected that Dad was, and would always be, her favorite and her deepest love. I confessed that to her as I was planning my own wedding. That’s when she gave me the best advice I ever received. She said, “Someday you kids will be gone and off on your own, and it will just be me and Dad again, just like in the beginning. There will have to be something special left between the two of us so we can go on.”

Her humor was of the bawdy Mae West style. It bubbled just below the surface at all times. She was a master of the double entendre and the risqué pun. The only indication that it was about to erupt was a sudden twinkle in her blue eyes and a mischievous grin. It meant she was about to blurt out something hilarious and probably totally inappropriate.

Even her discipline methods were peppered with humor and were so ridiculous and unlikely that they were met with giggles. “Knock it off before I flush you both down the toilet!” On car trips, “Stop fighting back there before I roll all your necks up in the car windows!”

We knew we would never fit in the toilet. Also, those old cars had slow, hand-cranked windows. There was no way she could hold down five squirming children long enough to do that.

The world will be a sadder, less funny place without her. The highest compliment I ever received was when someone who knew Mom said to me, “You act just like your mother.”

In her honor, I think I will put a pair of boy’s size six underwear on my head and paint my sidewalk purple.