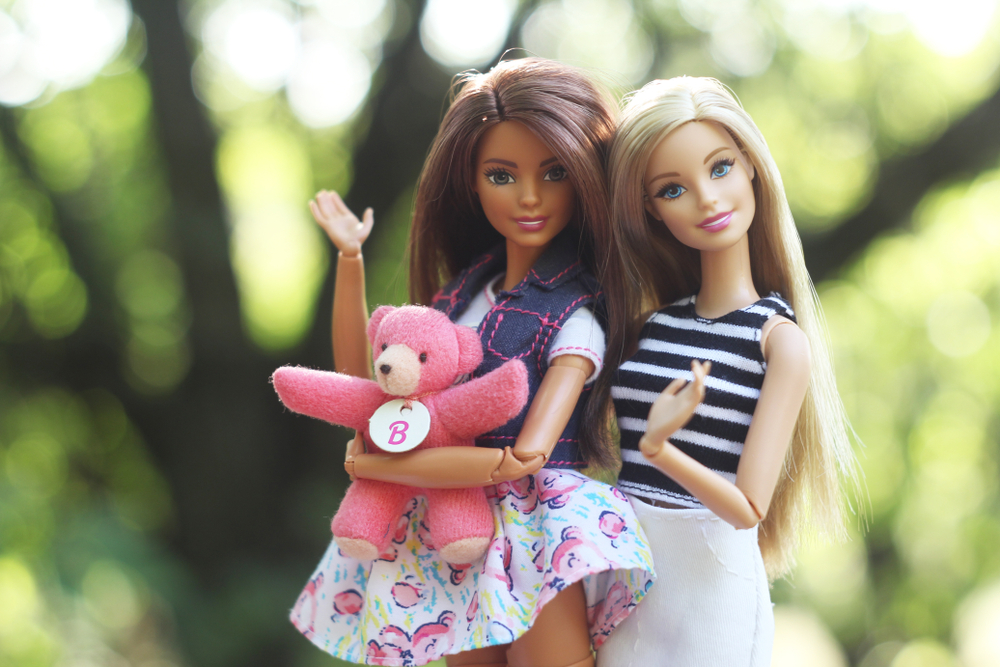 When I read that March 9 is National Barbie Day, I had mixed feelings. It’s pleasantly nostalgic and vomit-inducing all at the same time. As a kid, I loved Barbie. As an adult, I question her narrow presentation of female-ness. So I decided to delve back into my earliest memories to discern whether or not Barbie’s permanent, right-angled arms, distorted feet and nipple-less tits had done damage to my psyche.

When I was little, people thought I was a boy. I had a short haircut, and I wore pants and socially non-gendered colors like red and green. My mother, determined I not be put in the “pink” box just because I was a girl, dressed me in unisex clothes. And to most people, unisex equals “boy.” None of this bothered me because I was three-years-old and oblivious to other people’s snide remarks. Still am, actually.

Much to my feminist mom’s dismay, as soon as I was old enough to have clothing preferences, I loved pink and bows and lace and all things “girly.” I wore my ruffle-butt panties backward because I wanted to see those ruffles and all their fabulousness; otherwise, what was the point? Another obsession that caused Mom to grit her teeth? Barbies.

Ruth Handler, co-founder of Mattel, created Barbie back in 1959 with her own daughter in mind. She intended the wasp-waisted doll to show girls all they could be as they grew up, hence Barbie’s stunning array of erratic career choices. She’s been everything from a nurse to an astronaut to a rock star to McDonald’s cashier. But by 1975, people, my mother included, were beginning to question Barbie’s ridiculous figure and the effect that would have on young girls’ body images.

Despite my begging, Mom held out until my seventh birthday, at which point she finally relented and allowed me to receive a “My First Barbie” from a relative. I was ecstatic. I began changing her clothes and styling her hair immediately. It was only the beginning.

Before I was nine, I owned no fewer than 25 Barbies. I was fascinated with their individuality and endless supply of shiny, sparkly, often reversible clothing. In retrospect, that “individuality” stayed within the narrow box of straight and white (and even mostly blonde). Ruth almost certainly intended Barbie to be cis, though with no crotch parts, who can say for sure? Because each doll came with exciting new accessories —microphone, briefcase, twin babies, stupid McDonald’s short-order cook’s hat — I kept spending my allowance money at Target for the latest iteration. It was a stellar marketing plan.

My Barbies lived in the corner of my bedroom in a grand house designed and built by my dad. It was complete with wallpaper and carpeting remnants from our house and real lighting supplied by an old-school string of white Christmas lights — the kind that leave second-degree burns on your skin and melts plastic Barbie hair. And to go with that grand house, I had a Barbie Corvette, a swimming pool, a sofa/loveseat set, a Barbie cat and a Barbie dog. There was a refrigerator for fake Barbie food she probably didn’t eat because it’s fairly obvious Barbie had an eating disorder. I bought Barbie a pink toilet, even though she didn’t have a butthole. I had Barbie coat hangers for chrissakes. It was a pink, plastic orgy of consumerism.

Oh, and then there was Ken. It took only two years for the public to demand Barbie have a boyfriend, even though she was perfectly happy being single and living in the dream house with her fascinating plastic friends. So in 1961 Ken arrived on the scene. As a child in the 1980s, I was less enthused with him than my 1960s counterparts.

My two or three Ken dolls mostly served as placeholders in Barbie’s world. They sat on the couch to prove men existed and that Barbie’s babies (large-headed Strawberry Shortcake dolls who could not possibly have been birthed from Barbie’s two-inch hips) had a physically-present father. He and Barbie made out sometimes, and after I discovered soap operas, they started going all the way in Barbie’s pink canopy bed. But mostly, Ken said, “Goodbye, I’m going to work!” and got thrown behind my bed, so Barbie and her friends could do all the fun stuff with him out of the way. He didn’t have fabulous clothes or extravagant jewelry; he didn’t even have real hair. He wasn’t good for much besides an occasional roll in the hay.

I don’t think Barbie’s body negatively affected my self-esteem. Her 11-inch height, lack of genitals and permanently bent limbs meant I didn’t equate her to reality. I just liked using her as a vehicle for my imagination and playing dress-up with ballgowns, the like of which I would never own in real-person size. But I still would have benefited from seeing a more diverse set of Barbies, and others agree. When National Today polled 1,000 Americans, 22% wished for a plus-sized Barbie, 18% could dig a tattooed Barbie, and 6% said an LGBTQ Barbie would be a great idea. I could definitely go for all of those.

Ruth Handler birthed Barbie to show girls they could be anything they wanted to be. Now we’re talking about expanding the audience, including all different types of people who identify as female. More diversity in Barbie’s world allows all the girls of our real-world to see themselves in those successful roles her originator envisioned. Ruth may not have thought of it, but I bet she’d approve.