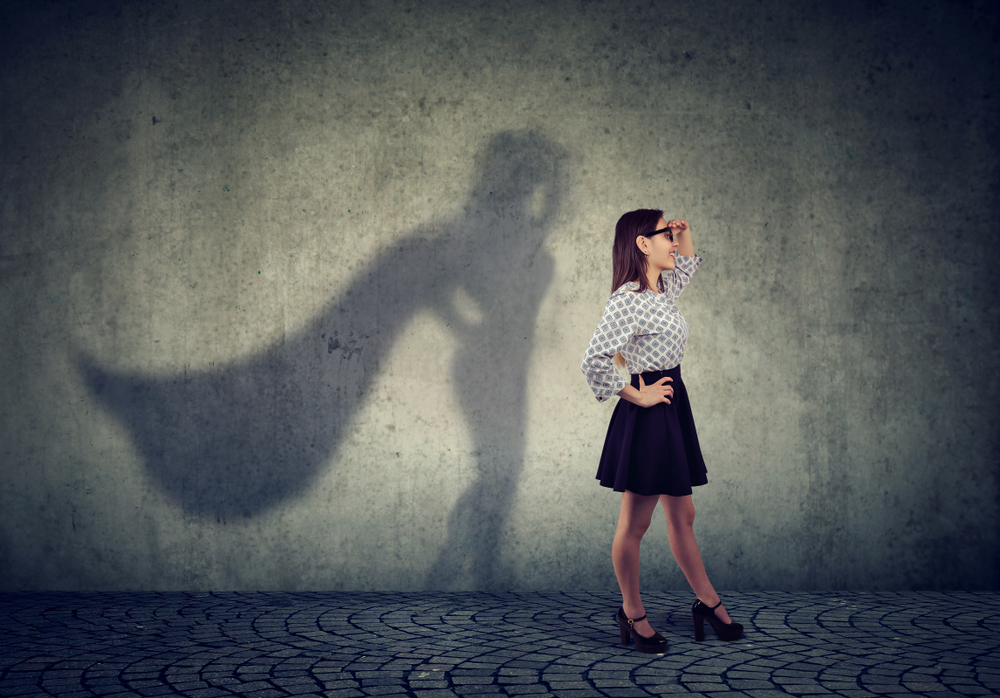 Five years ago, I wouldn’t have given two tattered capes about National Superhero Day. It’s April 28, by the way. Oh sure, I saw Superman and Superman II as a very young child. Back then, the word “movie” made me giddy with joy; it didn’t matter what the subject matter was. Really though, I was more of a Star Wars enthusiast. I liked my heroes rough around the edges.

For a person who claims not to like superhero movies, I’ve seen a lot of them – from Joker to X-Men to M. Night Shyamalan’s Unbreakable, which is a more subdued version of a superhero origin story. But for the most part, comic book movies weren’t my thing. Maybe it was the lack of dynamic female characters.

Despite my reservations, our family embarked upon seeing every Marvel movie in the most recent anthology — from The Incredible Hulk, which was boring and forgettable, to each super-entitled, arrogant iteration of Tony Stark as Iron Man. I enjoyed them. They were entertaining, and they weren’t The Lego Movie or How to Train Your Dragon — both good kid movies that we had thoroughly worn out.

Then, we went to the theater to see Bree Larson in Captain Marvel, and my little girl heart fell in love.

It doesn’t hurt that Captain Marvel takes place in the ‘90s — an era near and dear to the closet full of Doc Martens and Tool t-shirts in my heart. She falls to earth through the roof of a Blockbuster Video and blasts the head off of a life-sized cutout of Arnold Schwarzenegger from True Lies. Throw in a fight scene set to No Doubt’s “I’m Just a Girl,” and I’m a forever fan. How often has female superhero gotten a moniker as respect-worthy as “Captain” in a movie? I’d bet my tights and truth lasso that the answer is “never.”

It was Carol Danvers’s demeanor that really got me, though. Throughout the film, she maintains a calm sense of authority. She doesn’t yell or throw out pithy one-liners in an attempt to intimidate her foes. She speaks clearly and succinctly, but mostly, she is a woman of action. She takes care of business and doesn’t bother to gloat over her accomplishments, though she’s certainly not demure in any sense of the word.

And then there’s the relationship Carol has with her fellow pilot, Maria — a friendship full of depth, loyalty and affection. It was only upon witnessing it that I realized it was a cinematic rarity to see two women, not genetically related, so dedicated to each other. It makes tears well up in my eyes even now. Bechdel test officially passed, thank you.

As a 5-year-old, I pretended to be Luke Skywalker. I had a sprained finger splinted and wrapped in gauze, and the scene where Darth Vader cuts off Luke’s hand inspired me. Why Luke, who is a whiny little boy throughout most of the first movie? Because he was the main character, star of the show, the one who learned the force and got all the glory in the end. Leia was a pretty rockin’, smart-mouthed feminist character for the time, but she still had to don a metal bikini whilst enduring sexualized bondage next to Jabba the Hut. And she regularly got saved by men.

At that same tender age of five, I admired Wonder Woman. I remember the intro to the show with Linda Carter, most notably the part of the montage when she knocks out a pilot with her wrist cuffs after proclaiming, “You obviously have little regard for womanhood. You must learn respect.”

Incidentally, those cuffs were originally known as the “Bracelets of Submission,” leftover from when male oppressors enslaved wonder Woman’s Amazon tribeswomen. The Amazon women continued to wear them to remind them what would happen if a woman allowed a man to conquer her. I’ll let you draw your own conclusions about the backhanded feminism going on there. Suffice to say, a man wrote the backstory. Anyway, Wonder Woman ran around in a strapless leotard with her thighs bare. As young as I was, that seemed counter-intuitive for a superhero on the go.

Now, forty years later, Captain Marvel is my hero. She’s the main character of her own, self-titled movie. She is confident and capable of both loving friendship and kicking ass and taking Skrull and Kree names. She possesses an air of confidence and self-assuredness that I can only aspire to, and she doesn’t need her cleavage pushed up under her chin to do it. There is a refreshing lack of hyper-sexualization to her character.

So on National Superhero day, who are you going to celebrate?

When you look back on your childhood, or in my case, just last year, who was it you idolized? Maybe it was the typical man-in-tights, or perhaps it was someone who flew capelessly underneath the Quinjet radar.

Superheroes and the plot lines they act out reflect our evolving societal values. There’s a reason Tony Stark got out of the weapons defense business and into the renewable energy industry. There’s a reason Black Panther finally got his own movie. It’s why Mark Ruffalo’s version of the Hulk eventually decides, “Hulk smash!” is an outdated philosophy. And it’s why Captain Marvel’s initial villains, the Skrull, are revealed to be the actual victims of intergalactic persecution.

If the progression of superheroes is any indication of where we’re going as a planetary society, things are looking up. Captain Marvel for United States president, 2020.