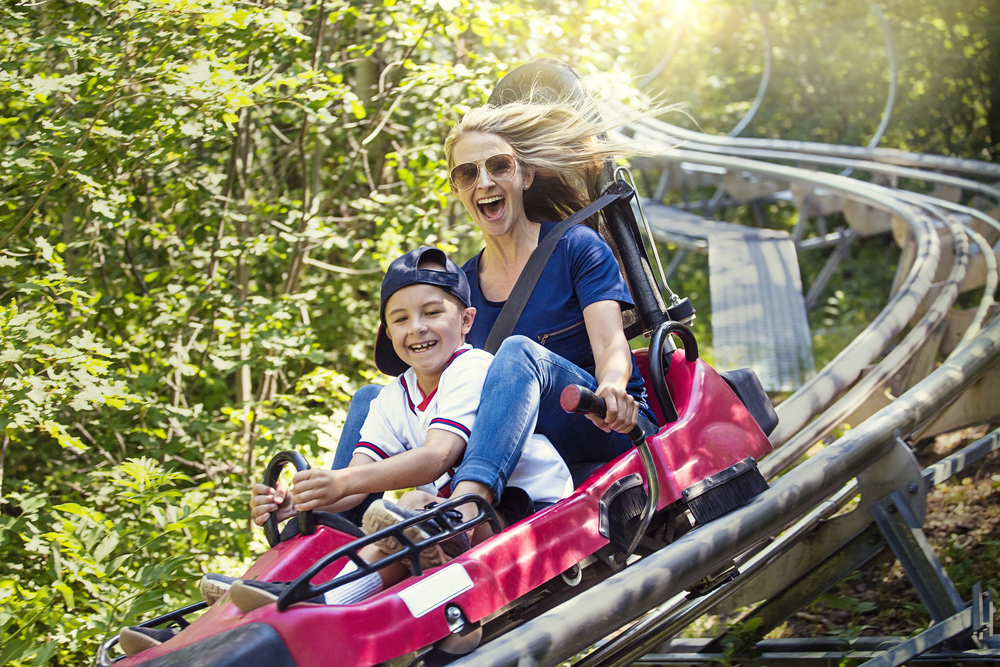 Off the Momcoaster for Good

When I decided to have a baby many years ago, I had no idea what I had signed up for. There have been more dips and dives, more heart-thumping, brain-rattling, stomach-flipping fears than a carnival ride.

From the day he was born, my son adored me. Okay, maybe it was just the readily available teat he adored, but eventually I am pretty sure it was all of me.

I carried him everywhere, his tiny arms around my neck, my nose buried in his wispy blond hair, taking in that delightful newborn baby smell. But quickly, I started having thoughts. Thoughts like, “Someday he will grow up and he will leave me.” Or “One day he’ll love some other woman more than me.” But then I’d sniff him again and all my worries disappeared.

He was about 13 when my fears started coming true. I remember making the mistake of asking him, “How do I look?” when I was dressed to go out. He responded with a snarky, “Geez, Mom, you really need to do something about that mustache.” I sniffed his head, but all I smelled with musty teenage boy “fragrance.” It didn’t do the trick.

What’s happening? I thought. He used to tell me, “Mommy, you look so pretty.” And, foolish me, I believed him. He used to beg me to take him with me anywhere I went. Now when I asked him to go anywhere with me, his usual answer was, “Get a life, Mom!” which I am pretty sure means, “No, thanks, beautiful mother. I have other plans that I can’t change,” but it sounds a lot ruder.

If I insisted that he go with me, he would trail 17 paces behind so no one would think we were together, wearing his cool shades and a sullen expression, his lips pursed in detachment and disapproval. And I’m fairly certain that behind those shades, he’d roll his eyes anytime I said anything “embarrassing,” which was apparently ALL THE TIME.

When something would make me laugh, and he was nearby, he’d admonish me to, “Stop laughing and smiling at everybody. People will think you are nuts.” I WAS nuts, who was he to point it out?

And heaven forbid I try to give him fashion advice. Me, the woman who had dressed him since the day he came shooting out of me in his birthday suit. But now whenever I’d suggest he might look good in something, he’d scoff. “Geez, Mom, are you trying to make me look like a geek or something?”

What happened to the sweet little boy who thought I could do no wrong? I did not have a baby so that 13 years later he could point out how stupid and square I was. I brought him into this world and I could take him out!

As he neared 16, that roller coaster car took a rapid 90 degree turn and began another steep descent. He started pointing out expensive cars he planned to by someday. He frequently informed me of what he perceived as poor driving on my part, even though he had never driven, and I had decades of experience.

He was with me when I filled out a sweepstakes entry with a prize of a new sports car. He asked, “If you win that, can I have it? I will be 16 soon.”

“Heck, no,” I said. “I will keep it for myself.” That will teach him to try to have his own life!

He shook his head in disgust and said, “Mom, you can’t drive a car like that. You have to be kidding! You would have to lose a few pounds and get some different clothes and maybe change your hair.”

When he finally turned 16, I bought him a used pick-up truck. I also paid for the outrageous insurance and its upkeep. His response to this gift? “Maybe if you got a job that paid more money, you could afford to buy me the car I want.”

I was beginning to wonder if this carnival ride would ever end. I also was beginning to understand how parents are able to let their children go off on their own. Every mama bird knows when it is time to kick the fledglings out of the nest.

After all, isn’t our job as a parent to turn that helpless infant, no matter how good he may smell, into a responsible, self-supporting adult? If that doesn’t happen, we will have a 40-year-old living in our basement when we’re collecting Social Security.

By the time he was 18, he came and went as he pleased. Between his part-time job, his college classes, and his social life, he was seldom home at all. My husband (did I fail to mention I have a husband?) asked, “Are you sure he still lives here?”

“Well,” I said, “groceries disappear from the refrigerator at an alarming rate and piles of dirty laundry stack up on the floor in front of the washing machine, so I am guessing yes.”

My son began to balk at the house rules. I informed them, as all parents eventually do, “As long as you live under my roof, you will follow my rules.” I really wish I had come up with something less cliché, like, “Every rule you feel the need to break, you owe me and your dad $5,000.” We’d be rich by now.

He decided to leave the nest. He got an apartment nearby, which he shared with two friends. I didn’t want to know what kind of debauchery was going on there. I deluded myself into thinking there wasn’t.

His pick-up truck full of belongings (which included some furniture and household goods which technically were not his) had barely left our driveway before I turned his bedroom into my home office/crafting room, hoping he could take a hint. I myself wasn’t sure whether the message was, “See what happens when you desert me? I get all the space!” or “Come back! I don’t know how to craft!”

He is an adult now, married with children, with a job and adult responsibilities. I have my sweet, respectful, affectionate son back, albeit a six-foot-tall one. His once downy blond hair is a graying buzz cut. He hugs me, kisses me hello and goodbye, and asks me for my advice on child-rearing and financial responsibility. I couldn’t be prouder of the man he has become.

It has been one hell of a roller coaster ride. I wouldn’t have missed it for anything, but I have turned in my season pass to that carnival. My stomach couldn’t take it any more.