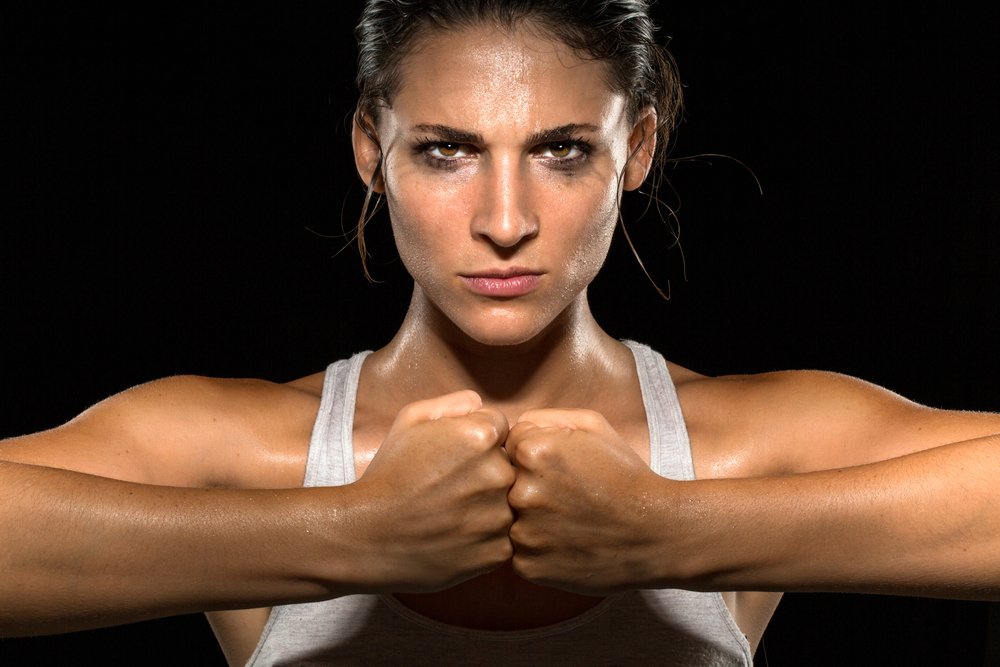 “We learn to fight like bad people in here. We fight dirty. We kick balls into throats. We have no mercy. Get used to it.”

Welcome to Krav Maga – a self-defense and fighting system developed by the Israeli military and practiced by middle-aged moms who grew up on Buffy the Vampire Slayer. It took years for me to actually pull the trigger. I did a martial art in college, Hwa Rang Do, that was equal parts sport and cult. We may or may not have had to prick our own fingers and sign our names in blood on the ‘scrolls’ as part of an initiation rite. What’s a cult really anyway, besides a group that got a bit too enthusiastic?

I loved the sport of it – the sparring, the skills, the tournaments…I even won a huge trophy taller than me when, by some fluke, I kicked a brown belt in the gut, surprising us both. There is a great feeling of competence and power that comes with even just some rudimentary knowledge of how to transform an attacker’s nuts into cracked eggs.

But, college is as college does, and I found myself distracted by other pursuits such as fencing, theater, and dodging the powers that kept insisting that I really needed to declare a major to graduate. Despite the fact that my name to this day is written in my own blood in a temple scroll somewhere in West Hollywood, I walked away from Hwa Rang Do several decades ago and have been kicking ass only figuratively ever since.

Fast forward to cruising altitude adulthood. I have one kid off to college and one more a sophomore in high school. The younger one still needs me, but we are thankfully past the stage where I have to sneak into her room and flip her over on her back because SIDS. I stopped doing that her freshman year. Point being, I had some time to work with to do something new and fun.

The question was, what? I love learning new things and do them all the time – tennis, mediation, hypnosis, cheese-making…there is just something about learning a new skill that makes me feel renewed. I especially love the people I acquire along the way who are doing these new things too. They tend to be pretty lighthearted and are brave enough to suck at something new as adults.

I kept trying to come up with a new skill to learn, but I was fooling myself. I knew what I wanted. For all these years I’ve known. I wanted to keep learning to kick ass, literally.

Whenever I’d watch Buffy or Xena or Princess Diana or Ellen (I have no proof about Ellen, but she’s ELLEN) at work, there was a longing; a feeling like I was watching a past self, or a future self, maybe – just definitely not a present self. One that could fearlessly sashay through a dive bar full of hooligans or deftly manage a studio audience. It’s what I was meant to be.

So, in 2019, I set out to audition different martial arts to see which one I liked. I ruled out going back to Hwa Rang Do because somehow having my blood in the scroll feels like my work is done there.

I started with Kung Fu.

I called a dojo and was told I could come in for a free session, with ‘Sensei Brad’. Ignoring the red flag there, I arrived, signed the papers that allowed them to kill me without consequence, and started my private session with Brad – a beponytailed 20-something who talked like a Point Break extra. Lots of “right ons!”

It was 30 minutes of basic movements training and just okay. After eschewing his advances to commit to a year contract, I accepted his offer another free training the following week. The following week I show up and see no Sensei Brad. Another Sensei-type is folding Kung Fu things and offers to go get Brad in the back room. A minute later, Brad stumbles from the back, making his way towards me in an ‘S’ pattern. Always giving folks the benefit of the doubt, I presume he’s been napping, but the waft of weed speaks otherwise.

I still took my 30-minute lesson, but this one was mostly Brad waxing on about how the world is a violent place and most things happen in circles. After once again eschewing the advances to put my blood in their scroll, I left, never to return.

I tried Hapkido next, and while the Sensei was not stoned, there were so many screaming misbehaved kids in the class that I left feeling like my free class should have come with a bottle of wine and an apology.

I have always been intrigued by Krav Maga. It’s no nonsense, no philosophy, no uniforms, no bowing, and no stoned instructors talking about circles. It’s all business, and the business is making bad guys rue the day they chose me to mess with. It’s all about the most expedient way of leaving a ne’er do well on the ground in the most painful way possible. All it’s missing is little pre-made notes you can leave on their unconscious bodies telling them to reconsider their evil ways and think about doing some volunteer work. But the only Krav Maga studio near me closed years ago.

And then it happened.

Driving along my usual route on a benign, but coy Wednesday afternoon, I see it: ‘Grand Opening – Krav Maga Bellevue’. This is probably how Wonder Woman felt when she saw the God Killer sword the first time. Destiny was calling and it had ample parking. Two weeks later, I was in my free trial class, and 60 minutes later I knew I had found my new version of cheese-making. For me, a new adventure is the perfect blend of fun, hard, challenging, attainable, and funny. The number of times per class when we get to say ‘nuts’ and ‘balls’ is definitely funny.

I’ve been doing Krav for about five months now – just long enough to be overconfident in my fledgling skills. But it’s fair to say I’m stronger, faster, more balanced, and can punch and kick way harder than when I started. But beyond that, I think the greater lesson has been the training on how not to be stunned when attacked.

We actively train with our eyes closed, get water thrown in our faces, all to simulate being surprised. Then we must react fiercely and without hesitation, making that pad my partner is holding sorry it was ever born. We train to use our voices, as women in particular tend to go silent when attacked.

We learn when to fight and when to run.

We learn techniques that we can use in a life-or-death situation and how to modify them when Creepy Uncle Ed gets a bit too handsy and we don’t want him to actually lose his trachea. At least not this time.

Without fail, in every class, we practice situational awareness. Being present and awake when we are walking around in the mundanity of our daily pursuits. Seeing threats before they become danger. Anticipating trouble phone-free, hands swinging at our sides, ready to offer a friendly wave, catch a falling baby, or school a mugger in civility by introducing his eye to my thumb.

While I don’t exactly feel like Buffy the Vampire Slayer yet, I think I’ll see the vamps coming sooner than I would have before and might even have a chance of kicking some vampire balls into throats. Like they said, no mercy.