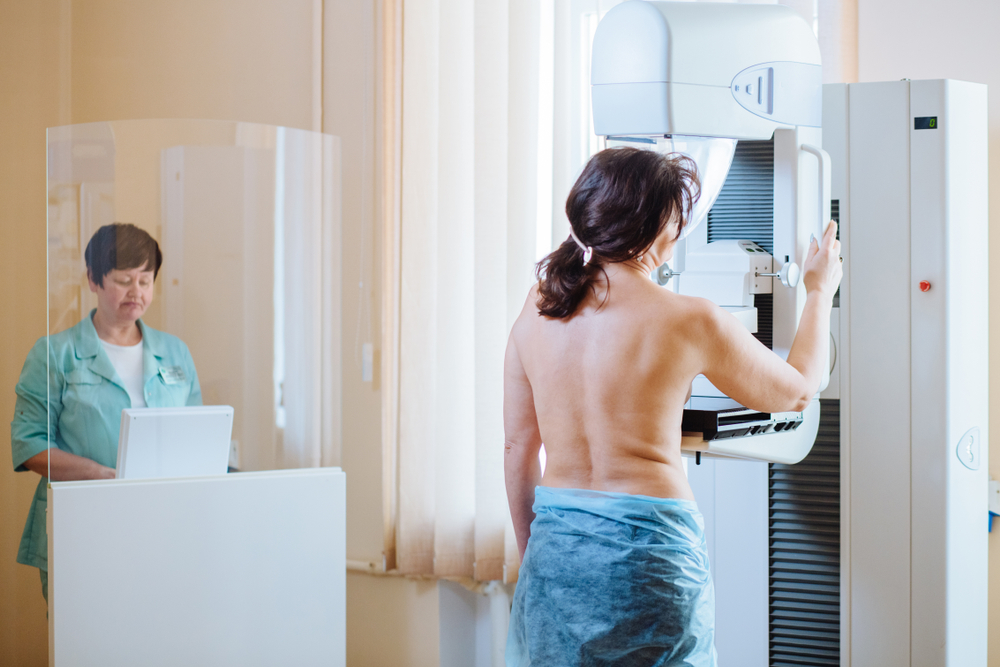 October is National Breast Cancer Awareness Month. Next to skin cancer, breast cancer is the most commonly diagnosed cancer among American women. One in eight women will develop invasive breast cancer in her lifetime. Self-exams and mammograms are the two most effective ways to catch unusual changes in your breasts which can signify breast cancer.

I like to refer to my annual mammogram as “The Annual Pressing of the Breasts.”

It gives the event an air of solemnity and reverence usually reserved for foreign coronations, only without the worldwide press coverage.

As if the annual mammogram were not awkward enough, I’m one of those women whose anatomy requires the addition of two small stickers with what appears to be a tiny b.b. in the center of each one. I call them “mammo ammo.” They are placed in the standard erotic dancer positions. I was told that these would mark the location of my nipples and help the technician read the films. The least they could do is attach a couple of tassels to them. It would make the occasion that much more festive, as well as give me a couple of souvenirs to take home.

Once I got into the exam room, the technician attached the mammo ammo and then held me hostage by cranking my breast firmly into a vice. She then stepped behind her protective screen and directed me to “stop breathing.”

In what other occupation does a person tell you to “stop breathing,” except maybe a serial killer who is about to smother you?

She said it in such a calm, soothing voice. It was more than a little creepy. I half expected her to come from behind her screen with a pillow in her hands and growl, “I thought I TOLD you to stop breathing!” I did not want to die topless and wearing a pair of nipple pasties.

When it came time to change sides, she instructed me to “flop out of that sleeve and change sides.” I kindly asked her to stop using the word “flop” regarding my breasts when she is talking to a woman my age. I do not need to be reminded that Isaac Newton was right about gravity. By the time we reach our senior years, we resemble Shar-Pei puppies, or perhaps the wicked witch in the Wizard of Oz movie after a bucket of water is thrown on her; just a puddle, a pile of clothes, and a hat.

After every change in position, as she uncranked me, she said, “Good job!” in the same encouraging tone I used to use when my son successfully “pottied” like a big boy.

Good job? Is she talking to me? I am standing up firmly pinned into a vice. What job did I perform? Is she talking to my breasts? The last time they performed any useful work was before I weaned my son back in 1977. Since then, they basically are useless, lazy appendages. I should sign them up for unemployment and disability. The good news is they were proclaimed healthy.

Perform regular breast self-exams, watch for unusual changes such as redness, itching, discomfort, lumps, or nipple inversion or discharge. Schedule your mammogram today. As you leave, be sure to tell the technician that you would like to order an 8 by 10 and a dozen wallets. Pass them out to your friends so that they know what healthy breasts look like. Autograph them if the mammo ammo looks especially sexy.

Whew, I feel better getting that off my chest.