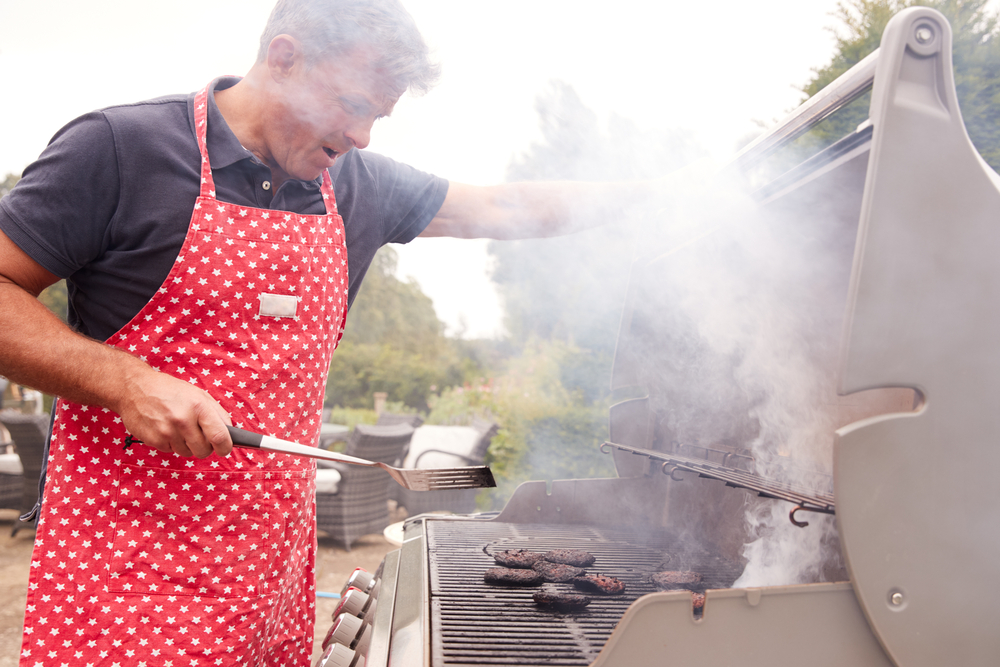 I have no grilling skills and neither does my husband. I’ve tried the gas grill, the electric grill, and the standard charcoal briquette method. Everything I attempted to grill was burnt on the outside and bloody raw in the center. Even corn on the cob.

The only thing I did learn is that you should never add more lighter fluid after the flames have begun to make their appearance. The burgers taste as if they have been marinated in kerosene. It’s also the reason I still have no eyebrows and draw them on with eyeliner. That explains why I have the facial expression of a circus clown who is in a state of perpetual astonishment.

I used to feel a stab of envy when my friends bragged about their man’s grilling skills. The last time my husband did any cooking was back in 1978 after my gallbladder surgery. I was too weak to hold the spatula, so he lovingly taped it to my arm and we count that as him “cooking.” We eventually got rid of our grill because its sole purpose seemed to be providing a home for wasps and spiders while taunting our inadequacies.

My friend Janice recently invited me to her family’s Fourth of July grill-out on their new deck. She gushed about her husband Ben’s note-worthy grilling skills.

I arrived at Janice’s grill-out a little early so we could visit and I could help her get ready, if she wanted help. I doubted she would. Janice is one of those enviously self-sufficient women. She probably would be great at that circus act where she could keep all those plates simultaneously spinning atop those sticks and never lose a single plate.

As a matter of fact, Janice built that deck herself, after she attended a single class on deck building at the local big-box hardware store.

Meanwhile, Ben – who was decked out in an apron that read “May I suggest the sausage?” with an arrow pointing down towards his crotch – occasionally turned over burgers and hotdogs, drank a few beers and shared sports stories with the neighbor next door who had been attracted to the smell of fire.

Janice, on the other hand, did not have a fancy apron laden with sexual innuendo. She was also not drinking beer and shooting the breeze. She had been too busy cleaning the house, buying food and supplies, washing and putting out the patio furniture, paper plates, and plastic forks, filling the coolers with beverages, and thinking about signing up for a class in overthrowing the patriarchy at the local community college. Well, I can’t be sure about the last one.

As other folks arrived, Janice quietly prepared the potato salad, iced tea, lemonade, baked beans, and coleslaw. Out in the yard, Ben was a virtual disco party of grilling dance moves. He attempted a behind-the-back burger flip and failed miserably, but he suavely made it look like a burger falling to the ground was all part of the show. He finished with a spin and a John Travolta pose.

While Janice fluttered around like a butterfly, quietly making sure everyone had something to drink and plenty of “side dishes,” Ben yelled out every few minutes, “Aren’t these the best damned burgers you ever tasted?” Everyone nodded and agreed that he was a grilling genius.

Afterwards, Ben told Janice to “Just relax. This is your special day. You don’t have to clean up this mess.” Just when I thought, “At least he is going to clean up his own mess for once,” he added, “Just leave it until tomorrow morning. You can take care of it then.”

Wow. Wasn’t that considerate of him?

By then Ben was so exhausted from his burger-flipping theatrics that he had to lie down on the hammock and drink beer all afternoon while Janice entertained the straggling guests.

Ben swears that the secret to grilling perfect hamburgers is knowing just when to raise and lower the heat. It looks to me like the real secret is getting someone else to do all the work while you hog the glory.

I can do without that kind of “help.” I’m thinking next time I go over to their house, I’m bringing a community college catalog with me, with that “overthrowing the patriarchy” class circled in red.

Hubby Tales in Lockdown: Here With Us, All...